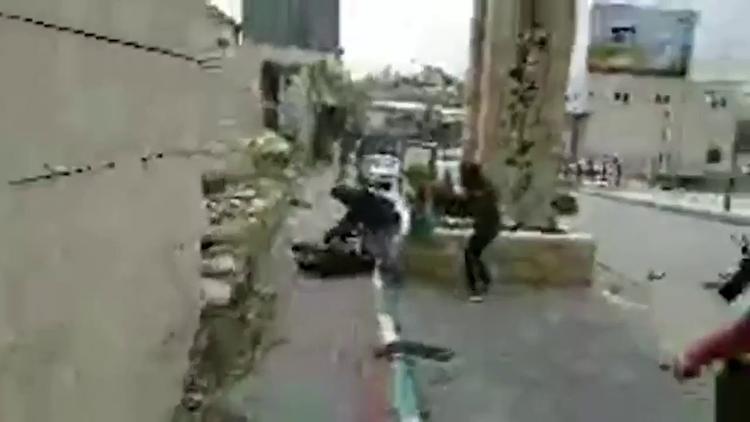 (Beirut) — Israeli authorities should reveal the reason for journalist Mohammad Malhem’s arrest or release him immediately, and should investigate the injuries sustained by journalist Abdul Mohsen Shalaldeh and hold those responsible to account, the Committee to Protect Journalists said today.

Yesterday, Israeli security forces arrested Malhem, a Palestinian reporter for the Hebron-based radio broadcaster Marah FM, while he was covering protests in the southern West Bank city of Hebron, according to news reports and a statement by the Palestinian Journalists’ Syndicate, a local press union, which was shared with CPJ.

Marah FM posted photos on Facebook of Malhem’s arrest, in which the journalist can be seen in the back of an Israeli military vehicle.

CPJ could not determine the reason for his arrest or where Malhem is being held.

Also in Hebron yesterday, Shalaldeh, a freelance Palestinian journalist working on assignment for Qatari broadcaster Al-Jazeera Mubasher, suffered a skull fracture after being hit by a rubber bullet fired by Israeli security forces, according to news reports and the journalist’s brother, Loay Shaladeh, who spoke to CPJ via messaging app.

Both journalists were covering protests against the proposed peace plan for the region recently announced by U.S. President Donald Trump, according to those news reports.

“The arrest of Mohammad Malhem and the injuries suffered by Abdul Mohsen Shalaldeh are part of a pattern of Israeli security forces showing little regard for the safety of Palestinian journalists,” said CPJ’s Middle East and North Africa Representative Ignacio Miguel Delgado. “Israeli authorities should investigate the injuries sustained by Shalaldeh, and should either file charges against Malhem or release him immediately.”

The Israeli Defense Forces did not immediately reply to CPJ’s emailed requests for comment on either case.

In a video shared widely on social media, Shalaldeh is seen immediately after being shot and is wearing a clearly marked press vest.

“A female soldier shot him directly in the head with a rubber bullet and, even though he was wearing his helmet, he suffered a skull fracture,” Loay Shalaldeh told CPJ, relaying what his brother had told him. “He was transferred to Al-Ahly Hospital, where he stayed for 24 hours and was discharged earlier today.”

The journalist’s brother said that doctors requested Shalaldeh return for check-ups over the next three days.