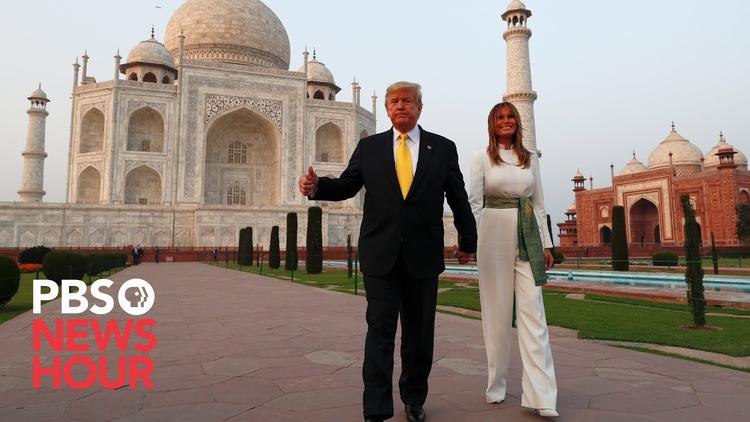 Ann Arbor (Informed Comment) – The Trumps visited the Taj Mahal during their trip to India. They didn’t have a right to do so.

The building is properly the mausoleum of Mumtaz Mahall, literally “Queen Mumtaz” in Mughal Persian. It was constructed of white marble in Agra between 1631 and 1648 by the Mughal emperor of India, Shah Jahan (1628–58), in memory of his deeply beloved wife. The chronicles say that his hair went white when she died.

The tomb of Mumtaz Mahall is inscribed with the mystical 99 names of God. The whole complex is thought to be intended to invoke the images of the garden of paradise in the Qur’an.

Hindi doesn’t have a “z” and so her first name was pronounced as “Mumtaj” and then shortened to Taj.

The Taj is among the most magnificent products of Indo-Muslim architecture. It was produced in a Mughal Empire that was Muslim-led but which was multi-cultural. Rajput and Maharashtran Hindu notables provided officers, troops and bureaucrats. A quarter of posts of eminence were filled by Hindus in the mid-seventeenth century, and Shah Jahan was 3/4s of Hindu descent.

Shah Jahan’s mother was a Rajput Hindu princess, Manmati. His father’s line went back to Sunni Muslim notables of what is now Uzbekistan and ultimately in part to Buddhists of Mongolia. He married a Shiite bride whose family had hailed from Tehran.

Much of India was Muslim-ruled from the 1200s through the British East India Company’s military victory at Buxar in 1764. Central Asian Muslims had mastered the heavy horse cavalry and were early adopters of artillery, and so overwhelmed Indian villagers and townspeople. For some reason, perhaps because of tropical diseases, horses could not be bred in India itself.

“The Taj Mahal is considered to be the greatest architectural achievement in the whole range of Indo-Islamic architecture. Its recognised architectonic beauty has a rhythmic combination of solids and voids, concave and convex and light shadow; such as arches and domes further increases the aesthetic aspect. The colour combination of lush green scape reddish pathway and blue sky over it show cases the monument in ever changing tints and moods. The relief work in marble and inlay with precious and semi precious stones make it a monument apart.

The uniqueness of Taj Mahal lies in some truly remarkable innovations carried out by the horticulture planners and architects of Shah Jahan. One such genius planning is the placing of tomb at one end of the quadripartite garden rather than in the exact centre, which added rich depth and perspective to the distant view of the monument. It is also, one of the best examples of raised tomb variety. The tomb is further raised on a square platform with the four sides of the octagonal base of the minarets extended beyond the square at the corners. The top of the platform is reached through a lateral flight of steps provided in the centre of the southern side. The ground plan of the Taj Mahal is in perfect balance of composition, the octagonal tomb chamber in the centre, encompassed by the portal halls and the four corner rooms.”

Most Indian Muslims are converts, though some later intermarried with Muslim immigrants from Central Asia, Iran or the Middle East, and they themselves have created genealogies going back to those places. British colonial anthropologists of the nineteenth century pointed out that Bengali Muslims did not differ in appearance from Hindus and so were almost certainly just local families who embraced Islam. Most such conversion in India was peaceful and voluntary, under the influence of Sufism or, as Richard Eaton argued, through patronage networks.

DNA analysis, archeology and linguistics all demonstrate that speakers of a language descended from proto-Indo-Aryan migrated into India. Some were Iranian agriculturalists who came south. Others were pastoralists who migrated in the second millennium BC. These migrations of people speaking this language group explain why Sanskrit and North Indian regional languages are related to European languages, since Indo-Aryan speakers also migrated into what is now Turkey and then into Europe.

The conclusion, that Vedic Hinduism is related to old Iranian, Norse, Greek and Roman religion and is not indigenous to India is now denied by fanatical advocates of “Hindutva,” who want to maintain that India was always Hindu and the old Indo-Aryan language originated in India.

These rather ridiculous positions are put forward in the service of a virulent Hindu nativism. One of the reasons for upholding this untrue proposition is so that no one can say that both Hinduism and Islam came to India from the outside. But they both did; Hinduism just got there first.

The chief proponent and implementer of a fascist Hindutva is Indian prime minister Narendra Modi of the far right Bharatiya Janata Party. Modi did nothing to stop massacres of Muslims in Gujarat when he was governor there a couple of decades ago, and he has systematically dismantled India’s pluralist and democratic institutions. He is backed up by gangs of the RSS, a particularly fascist group whom he has seeded into major Indian institutions.

Modi’s most recent initiative is the Citizenship Amendment act, which fast-tracks non-Muslim immigrants for citizenship over Muslim applicants. Although it does not affect most Indian Muslims, it has the symbolic effect of making them second class citizens.

Modi also has rendered nearly 2 million Muslim Indians in the eastern Assam state stateless, since they are Bengali Muslims rather than Assamese.

Modi has more or less imprisoned the entire Muslim-majority state of Kashmir (population 12.5 million) and cut it off from internet access to the outside world.

Gradually, he is setting up the 201 million Indian Muslims for demotion to the very bottom of Indian society and perhaps ultimately for statelessness and continual pogroms.

The more extreme elements of the Hindu nationalist movement have a plan to destroy the Taj Mahal. Nor can the Hindutva crowd admit that it and the Mughal Empire were fundamentally Indian achievements, even if mingled with Persian high art. The marble is from Rajastan. Many of the craftsmen were Hindus.

Many of Modi’s Hindutva programs deeply resemble the policies of the Trump administration toward Muslims.

Trump has imposed a Muslim ban with regard to immigration, forbidding visas to several Muslim-majority countries. He said “I think Islam hates us.” He has whipped up hatred of American Muslims, helping provoke the firebombing of numerous US mosques. He and his son-in-law Jared Kushner have attempted to impose permanent Apartheid on Muslim Palestinians.

Trump and Modi are both illiberal authoritarians chomping away at the foundations of democracy like hungry termites. Both are notorious Islamophobes with nothing but disdain for Muslims and the achievements of Muslim civilization.

And that is why, dear reader, for the Trumps to visit the Taj Mahal is sort of like notorious anti-Semites visiting The Alte Synagoge (Old Synagogue) in Erfurt, Germany. They don’t deserve it.