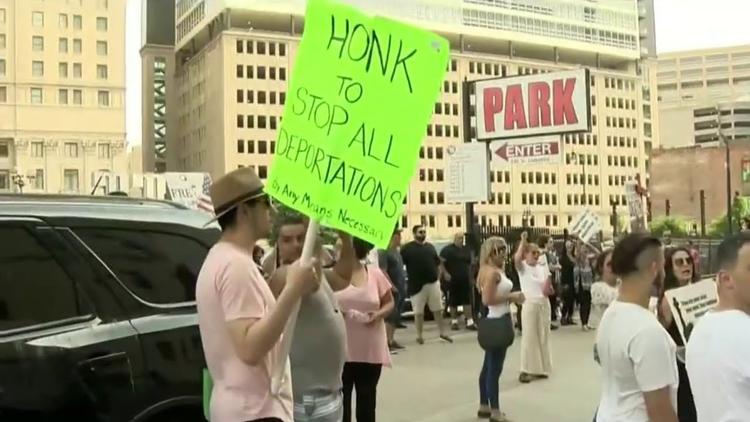 To deport Iraqi Christians, Trump’s immigration officials rely on testimony saying they won’t be at particular risk. But to justify funding and attention, officials elsewhere in the administration say the Christians face grave danger.

(ProPublica) – Even as U.S. immigration officials have pushed to deport hundreds of Iraqi Christians over the last few years, asserting in court that they are unlikely to be targeted in their homeland, another arm of the Trump administration has insisted just the opposite, saying that Christians in Iraq face terror and extortion.

Last September, a senior Trump appointee at the U.S. Agency for International Development told a government commission that in the part of northern Iraq where many Christians live, militias aligned with Iran “terrorize those families brave enough to have returned, extort local businesses and openly pledge allegiance to Iran.”

In some towns, the numbers of Christians who have returned after the defeat of the Islamic State “have reached only 1 to 2% because of persecution by these militias,” said the official, Hallam Ferguson. “While the Iraqi government has pledged to rein in these militias, they continue to operate with impunity in many areas, with the authorities seemingly unable or unwilling to confront them.”

The same day, a Middle East expert completed a sworn declaration at the request of the Department of Homeland Security for use in its efforts to deport Iraqis. The American Enterprise Institute’s Michael Rubin argued that despite a recent history of American occupation, terrorist attacks and the violent takeover of large swaths of the country by Islamic State militants, Iraq is now a more stable country with an increasingly professional government.

Iraqi Christians could count on the state’s protection and are “largely immune” from politically motivated violence, Rubin wrote.

“For the past several years, Iraq’s Shi’ite-majority government and security forces have worked to secure Christian churches and Christian neighborhoods,” Rubin wrote. “It is the elected Iraqi government which is now in control of Iraq.”

Government lawyers have submitted Rubin’s statement — along with similar declarations by two other experts — to courts during immigration hearings. The Rubin declaration was submitted by DHS lawyers as recently as last month.

The assessments by Rubin and the other experts can have significant consequences.

The administration has sought to deport hundreds of Iraqis, many of them Christians, who immigrated to the U.S. years ago. To stay in the U.S., many of the Iraqis have to prove that if they are deported, they are most likely to be tortured by, or with the tacit permission of, the Iraqi government — a higher standard than what is used in typical asylum cases. That gives DHS a strong incentive to emphasize Iraq’s progress and portray the country’s government as competent and willing to protect all its people.

President Donald Trump said in a January speech in Michigan that he would grant an “extension” to Iraqi Christians facing deportation, but DHS’ effort to deport the Iraqis is ongoing, lawyers said.

In approving one Iraqi Christian’s deportation late last year, an immigration judge wrote that he found the experts’ declarations “persuasive” and was convinced that “the Iraqi government has cracked down” on abuses by the majority-Shiite Muslim militias that helped defeat the Islamic State but have not disbanded since its demise.

In an emailed response to questions, Rubin said that he does not agree with the Trump administration’s policy of deporting the Iraqis, but that he had been asked for an informed assessment and not his political opinion.

“The only question I focus on when contributing declarations or when asked in court is whether Christians returning to Iraq are likely to be subject to detention, torture or murder upon their return, and the answer to that objectively is no,” Rubin said.

Rubin said he plans to update his statement to address recent unrest in Iraq, where there have been widespread demonstrations and the killing of hundreds of mostly unarmed protesters.

The two other experts who took similar positions as Rubin, Denise Natali and Douglas Ollivant, did not respond to requests for comment. Natali is now a senior State Department official.

The State Department, USAID, DHS and the White House did not respond to requests for comment, and the Iraqi Embassy in Washington did not offer a response either.

While the Iraqi government has succeeded in defeating the Islamic State and winning back control of its territory, and does not itself engage in persecuting minority groups, religious and ethnic minorities have little faith the government can protect them against a multitude of active, semiofficial armed groups, experts said.

“My view aligns more closely with USAID,” said Steven Cook, a Middle East expert at the Council on Foreign Relations, who visited Iraq in December. “Iraq seems to be in a situation of terminal collapse. With the continued presence of extremists and the unreliable central government, I find it hard to believe that Christians are safe and secure.”

Lawyers for the deportees have also filed declarations from human rights experts arguing that the deportees would be at risk of detention and abuse.

The Trump administration has frequently highlighted the dangers faced by Christians to support its decision to allocate hundreds of millions of dollars in foreign aid for them and other religious minorities in Iraq and Syria.

The cause is especially popular with Trump’s conservative Christian base, which he is seeking to solidify ahead of the 2020 presidential election. Vice President Mike Pence, in particular, has made this issue a priority. Starting in 2017, his aides pressured USAID to direct more funds to religious minorities in Iraq, including Christians. A ProPublica investigation last year found that, under pressure from Pence and in contravention of USAID regulations, political appointees were closely involved in deciding grants in Iraq that went to Christian groups.

In a September 2019 interview, Ferguson said the U.S. was “pretty disappointed” with the Iraqi government. “One could argue that they’re kind of standing by amidst the continued ethnic cleansing of northern Iraq.”