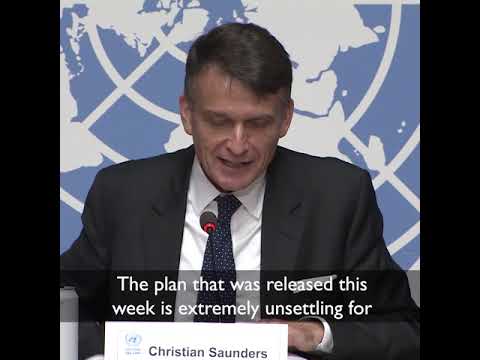 (Middle East Monitor) – The UN Relief and Works Agency for Palestine Refugees (UNRWA) remains in perpetual financial crisis. Spokesman Adnan Abu Hasna has warned that apart from a possible cessation of services by May, there are no funds for emergency programmes in the occupied West Bank and Gaza Strip. Only $125 million has been received by the Agency so far, despite pledges of $299 million in total. To be able to operate successfully in 2020, UNRWA needs over $1.4 billion.

How can UNRWA thus contribute towards the achievement of the UN Sustainable Development Goals (UNSDGs), including the eradication of poverty, access to health and education, as well as ensuring economic growth and opportunities for Palestinian refugees? It is an impossible situation. The UNSDGs are ideals that fail to address the political issues surrounding the absence of basic rights and needs. UNRWA itself operates not only with a deficit in terms of its funding — which is made up almost entirely of voluntary donations — but also due to a discrepancy between international financial support for humanitarian aid and human rights violations. US “military aid” to Israel for violating Palestinian rights will always surpass international humanitarian aid for Palestinians.

Israel’s presence has disrupted Palestinian life for decades. It has transformed a self-sufficient population — life before the 1948 Nakba saw Palestine as one of the world’s top exporters of citrus fruits, for example — to a fragmented people dependent on handouts from the international community. What purpose do the UNSDGs serve when Palestinian refugees in particular are living emergencies every single day of their lives?

The funding deficit already presents a problem that may turn out to be insurmountable in the future. Despite solidarity rhetoric, the international community is increasingly turning its attention away from the Palestinian cause, because politics have dictated the creation and maintenance of humanitarian deprivation. This has been reaffirmed in the UN’s adoption of the two-state compromise as the only purported solution for Palestinians. The Trump administration’s “peace plan” to annihilate Palestine goes further in exacerbating Palestinian deprivation with its aim to dissolve UNRWA.

The Agency provides an example of how the UNSDGs are unachievable in the colonial context created by Israel and supported by the international community. The speed at which violations are committed by Israel and now overtly supported by the US, including the looming annexation of the occupied West Bank, ensure that UNRWA is left several steps behind. Regardless of the programmes it implements to ensure that basic needs are met, the cycle of displacement perpetuates the same turmoil from a growing refugee population which has consistently requested the legitimate return to their land.

Palestinians have been forced into poverty and lack opportunities compatible with the education they receive, because of Israel’s aim to continue its ethnic cleansing of Palestine. UNRWA’s role is allegedly divested of politics, yet it operates from within the international political framework that has dictated the Palestinians’ oppression. Unless the Palestinians regain their political rights, the UNSDGs will remain unattainable. Indeed, in the absence of the legitimate right of return, there is no sustainability for Palestinians, who will remain the victims of this experiment unleashed by the UN.