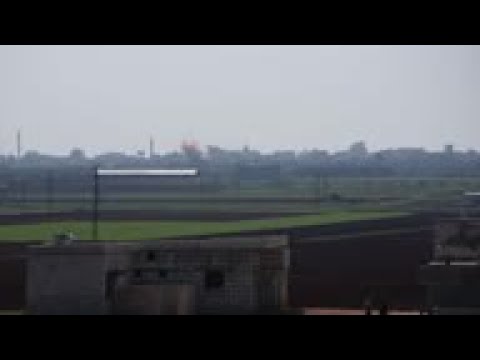 ( OpenDemocracy.net) – The tactics of Syrian and Russian forces are unforgiveable – but scarcely different to what the US and its allies were doing just a few years ago.

Around the world, people are watching the suffering of the people of Idlib with pity; their governments are alarmed at the looming confrontation between Turkey, a member of NATO, and Russia and Iran, the backers of the government of Syria led by Bashar al-Assad. The brutal tactics of Assad and his allies are nothing new, however. It is just that there was much less noise in the West when they were deployed in the region before, by different actors.

The Syrian government and its allies are attempting to take control of Idlib Province with a combination of air power, artillery bombardment and ground forces. Russian and Syrian air forces provide the air power; the Syrian army and Iranian-backed militias make up the ground troops. Air and ground bombardment have been critical because the rebels have no anti-aircraft weapons and have very little in the way of artillery, so it has become a matter of ‘remote warfare’ carried out at a distance wherever possible.

An inevitable result has been many civilian casualties, with reports last week of schools being hit, as well as huge movements of refugees desperate to escape the conflict yet unable to cross the border into Turkey.

Many states have roundly and rightly condemned the tactics used by the Syrians, Russians and Iranian-backed militias, with UN officials pointing to an unfolding humanitarian disaster. An uncomfortable matter lurking in the background, however, is that the war is being fought in very much the same way as the US-led coalition fought ISIS. It may well be that the Syrians and Russians have studied closely the coalition’s tactics, especially in its assault on Mosul and Raqqa towards the end of that war.

It had started soon after ISIS had seized the key Iraqi city of Mosul early in 2014 and was laying siege to up to 40,000 Yazidis trapped on the Mount Sinjar ridge 90 kilometres to its west. Their situation was desperate and in August Barack Obama started an air war against ISIS, which was joined by a coalition of states including the UK and France.

That quickly evolved into the intensive use of air power against centres of ISIS control, with the taking of territory mainly left to Iraqi army units aided by Iranian-backed Shi’a militias. As this combination of air and ground forces was effective across Iraq, it was repeated as ISIS paramilitaries retreated across the border into Syria, only this time most of the ground troops were from Syria’s Kurdish minority. The war culminated in the taking of the ISIS-controlled city of Raqqa on 17 October 2017, with much of the city reduced to ruins by bombing and artillery barrages.

The primary aim of the US-led coalition was to defeat ISIS but the latter’s paramilitaries were so determined, and had so much experience of urban combat, that US or other troops would take considerable casualties if they sought to take control by house-to-house fighting. Instead, the focus was on intensive bombardment, what might be termed ‘softening up’. All too often it was civilians who bore the brunt, even if this aspect was scarcely mentioned by coalition representatives.

Thus, immediately after the taking of Raqqa, coalition sources said that there had been 180 civilian casualties but over the following year a study of 200 strike locations by Amnesty International and the Airwars monitoring group reported that the real number was more than 1,600.

What happened in Raqqa was devastating enough. But it had been even worse in Mosul three months earlier after an intense eight-month siege. By the time the ISIS forces were defeated some of the few journalists who got there reported that what remained looked like the Soviet city of Stalingrad after the notorious German assault of 1942-3.

According to official figures, the coalition carried out over 1,250 attacks hitting thousands of targets with over 29,000 bombs, missiles and artillery shells. In the aftermath of the war it acknowledged just 352 civilian deaths, but the Iraqi prime minister admitted the much larger number of 1,260. Local sources, including many aid workers who have talked to citizens in Mosul, believe that the number of civilians killed by coalition forces is much larger than the coalition admits, and Airwars’ own assessments support this.

It should be noted that far more civilians were killed by ISIS paramilitaries. Still, the pattern of warfare adopted by the coalition has been closely followed by the Syrian government. In Iraq it was multinational air strikes backed up by US, French and Iraqi artillery and followed up by Iraqi Army and Shi’a militia units; in Idlib it is now Russian and Syrian air strikes and Syrian artillery backed up by Syrian army and Shi’a militia units.

What applies to casualty estimates for Mosul and Raqqa applies also to the US-led air war as a whole. As The Atlantic concluded:

Across the entire coalition war against ISIS since 2014, the United States and its allies have so far conceded 841 civilian deaths – while Airwars places the likely minimum tally at 6,200 or more killed.

This does not mean that what the Syrian government is doing is remotely acceptable. It means it is little short of hypercritical for Western states involved in the coalition to criticise the Assad regime while ignoring their own shortcomings. Not only that, but any such criticisms will simply be met by hollow laughter across the Middle East.