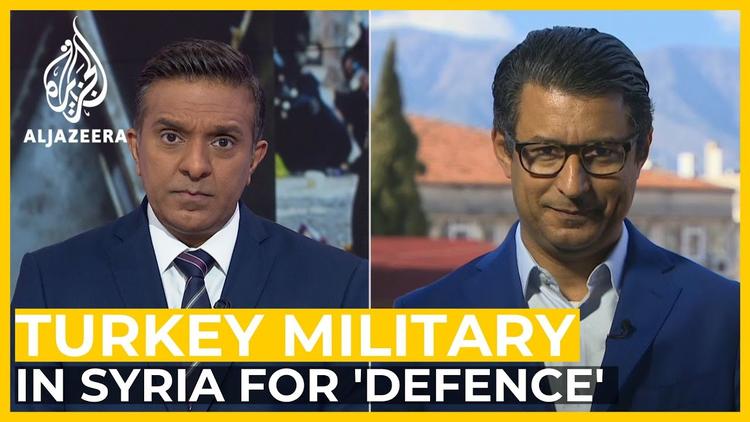 Ann Arbor (Informed Comment) – Turkey shot down two Syrian fighter jets over Idlib province this weekend and Turkish drones and artillery took out armor on the ground, allegedly killing over a hundred Syrian troops, along with Lebanese Hizbullah fighters and Iran-supplied Shiite forces.

Syria on Sunday announced that it was closing its air space to all aircraft, especially over the northwest province of Idlib, warning that foreign planes making incursions over Syrian territory risk being shot down.

A Russian spokesman concurred, warning Turkey that Moscow could not guarantee that Turkish fighter jets operating over Idlib would not be shot down. Russia, however, did not threaten to intervene itself, and Erdogan and Putin are to meet on Thursday in hopes of de-escalating the crisis.

Syria and Iran are no longer depending on Russia help in the air, since Moscow has stood down since Friday, and are planning ways of taking control of Syrian air space themselves.

The problem for Syria is that its anti-aircraft batteries are being taken out by sophisticated American-supplied Turkish weapons and there is little reason to believe that Syrian pilots can win dogfights with the Turks. Only if Russia does more than tut-tut could Damascus hope to blunt the Turkish riposte, which has emboldened fundamentalist rebel groups to retake some of the territory they have lost in Idlib in the past three months.

Turkey on the other hand has failed to secure US or NATO help and so is on its own in Idlib. Erdogan’s intervention in this part of Syria has been denounced by the centrist People’s Republican Party (CHP), one of Erdogan’s chief rivals, and you wonder whether the Turkish public has the stomach for a bloody Idlib war that cannot be sold as self-defense since it is being fought on Syria soil.

Iran has lost 21 Shiite fighters, including Afghans and Pakistanis, to the Turkish and Idlib-based rebel forces in recent days. Some reports, one from an obscure Bulgarian site, say that Iran has threatened Turkey with retaliation, but IC cannot verify it.

The Turkish Air Force and ground forces have invaded Idlib Province in response to the campaign to take much of the province launched by Syria, Russia and Iran since December. Some one million out of three million civilians have been displaced by the campaign, and Ankara is afraid they will join the 3.5 million Syrians refugees already in Turkey.

Turkish president Tayyip Erdogan had given Syria an ultimatum to return to last summer’s cease-fire lines by the end of February, which Damascus ignored.

One of Syria’s goals was to take complete control of Aleppo province to the east of Idlib and to open the M5 highway linking Aleppo and Damascus, Syria’s two largest cities. This move required taking the town of Saraqeb, which had been accomplished late last week but now it is back in rebel hands and the highway is again closed.

On Thursday, an air strike killed over 30 Turkish troops, whom Russia accused of being embedded with extremist fundamentalist elements. Turkey had pledged to curb these militants in Idlib in return for a cease-fire, but Damascus and Moscow say it failed to do so.

Idlib is, with the exception of Kurdish areas in the northeast, the last major province of Syria still in the hands of rebels against the government, who operate among 3 million innocent civilians. The rebels forces are on a spectrum from local Sunni dissidents against the secular, one-party Baath regime to groups linked to al-Qaeda.