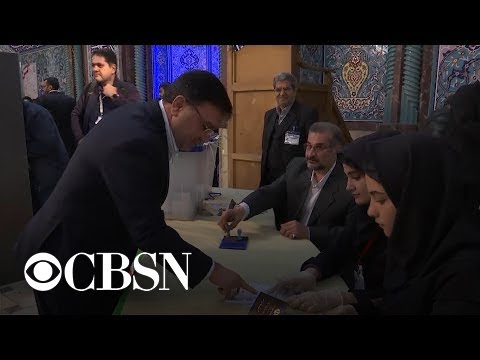 Melbourne (Special to Informed Comment) – For the first time in the history of the Islamic Republic of Iran the voter turn-out at the parliamentary elections has fallen below the psychological threshold of 50%. According to the Interior Ministry in charge of administering the elections, the national participation rate was 42.5%. In the capital city Tehran the participation was a shocking 25%. This is nothing short of a popular vote of no confidence.

Despite their differences, the reformist and the hard-line leadership in Iran consistently urged Iranians to take part in elections, presenting it as a matter of national duty. On the eve of the February polls, the Supreme Leader Ayatollah Khamenei pleaded with the voting public to participate in the elections even if they did not like him, because the future of the country depended on it. This was the most explicit acknowledgement of the widening gap between the regime and the public, and an attempt to appeal to patriotic instincts.

President Hassan Rouhani also referred to similar concepts of national pride and unity to urge electoral participation. He also spoke about the bond between the state leaders and the people that is renewed periodically at elections. He insisted on the idea of the ‘republic’ as a pillar of the Islamic Republic of Iran. The low participation rate and the election results are a significant blow to the regime and to Rouhani.

The election delivered a landslide victory for hard liners. There is an established correlation between high participation rates and the electoral fortunes of the reformist faction in Iran. Low turn-out at the ballot boxes hurts reformers. The reformist camp had a number of setbacks and disappointments during President Rouhani’s term in office which alienated the reformist voting public. The sense of disillusionment with the capacity of reformist and pragmatic leaders to bring change was overwhelming for the majority of the voters.

President Rouhani came to office in 2013 with a popular mandate to bring Iran back from the brink of collapse. His message of hope inspired the public and allowed him to push through a historic nuclear deal with P5+1 (the five permanent members of UN Security Council and Germany). Despite the excitement it generated, the nuclear deal failed to bring Iran out of isolation. In 2018, President Donald Trump withdrew from the deal, snapped back extensive sanctions on Iran by way of exerting ‘maximum pressure’ on the regime and slapped secondary sanctions on any international company that contravened US-imposed sanctions on Iran. This has brought the Iranian economy back to the brink and has resulted in periodic public displays of outrage and frustration.

Iran is more isolated under Rouhani than his firebrand predecessor President Mahmoud Ahmadinejad. Tensions in the Persian Gulf with the US Navy, the US killing of commander Ghasem Soleimani and Iran’s missile attack on a US base in Iraq have boxed Rouhani in a position of confrontation with the United States. His hard-line critics had long criticised Rouhani’s policy as misguided and ‘weak’ in relation to the United States and see President Trump’s hostile posturing on Iran as vindicating that view.

President Rouhani has also failed to address rampant corruption and mismanagement, key campaign topics against his predecessor’s administration. Politically, Rouhani has spoken regularly about moderation and tolerating diversity of views, but the political scene in Iran did not witness an opening up during his presidency. It is not surprising that voters in his natural electoral base have become disillusioned with his promises and his ability to deliver. This erosion of confidence in Rouhani is symptomatic of the disarray in the reformist camp and evaporating hopes of improving conditions by working within the system.

President Rouhani is now in the unenviable position of working with a hostile parliament. He is cornered internally and externally. His hard-line critics blame him for putting his trust in the good will of the United States and making Iran look weak, while Washington and its regional allies treat him with contempt. There seems no room left for Rouhani to regain the posture of a statesman and salvage his legacy. He is unlikely to be able to take any major foreign policy initiative in his last year in office, which does not bode well for Iran’s behaviour in the region. Rouhani has been reduced to a caretaker president until the next presidential election in 2021, which in all likelihood will bring a hard-liner into office.

The Iranian leadership repeatedly urged for mass participation at the parliamentary elections, calling it a patriotic and Islamic duty and a show of unity in the face of US ‘maximum pressure’. The record low turn-out delivered a major blow to the regime and put on public display the significant disconnect between the public and the ruling regime.