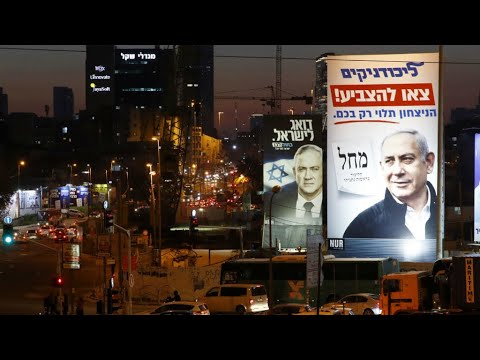 Ann Arbor (Informed Comment) – Three Israeli television news channels’ exit polls suggest that indicted prime minister Binyamin Netanyahu’s far-right racist Likud Party fell just short of a majority in Israel’s third parliamentary election in a year. The Likud, founded in the age of supremacist racialist parties of the 1930s and 1940s, was projected to gain 59 seats in the 120-seat Knesset or Israeli parliament. If these preliminary indications are borne out in the actual election results, Netanyahu can probably find two MPs to join him so as to form a government– though he needs more than than for a stable governing majority.

Netanyahu will go to trial for corruption charges in mid-March.

Ironically, the Joint List of Palestinian-Israeli parties and some Jewish leftists may do extraordinarily well, also, garnering as many as 15 seats out of 120. Palestinian-Israelis, commonly called “Israeli Arabs” or the “Palestinians of 1948,” comprise about a fifth of the population of Israel, but by Israeli law only Jews have sovereignty. Monday’s victory for the Joint List has few parliamentary implications, since Jewish parties will no more ally or co-legislate with the Joint List than white Alabama politicians would have cooperated with African-Americans in the Jim Crow era.

Member of the Knesset with the Joint List, Shadi Abu Shahada, blamed Netanyahu rival Benny Gantz for the debacle, saying that Gantz’s Blue and White coalition lost (with a projected 38 seats) because it had failed to distinguish itself in any important respect from the Likud. He implied that if all Gantz could offer was a knock-off Likud, it was understandable that Israeli voters decided they might as well go with the real thing. Gantz has been as eager to oppress and expropriate the Palestinians as Netanyahu.

As for the Occupied, stateless Palestinians, they viewed the news of the Likud semi-victory as a harbinger of unadulterated doom. PLO official Saeb Erekat proclaimed the results “the triumph of Apartheid.”

Netanyahu campaigned on stealing much of the Palestinian West Bank from the indigenous Palestinians, and so forever forestalling a Palestinian state. He was given a green light for these militaristic and expansionist policies, reminiscent of those of Mussolini toward Occupied France and Libya during WW II, by the Kushner Plan for permanent Apartheid. The obvious support of US president Donald J. Trump for Netanyahu along with American green-lighting of the expropriation and brutalization of the Palestinians, may help explain why Netanyahu did so much better in these elections than in the previous two.

In his victory speech Netanyahu proclaimed that he had made Israel a super-power in every dimension, socially, economically, and militarily, and had made the country a delightful place to live.

He promised a quick defeat of Iran, and boasted that he had made new friends among Arab governments, many of which were now supporting Israel [because of common fear of Iran].

In fact, Israel has been turned by Netanyahu into a seedy Apartheid state inextricably entangled, as political scientist Ian Lustick argues, with six million Palestinians and Palestinian-Israelis, five million of them stateless, under Israeli military rule or siege, in one of the worst ethno-nationalist nightmares in the world.

Israel is 31st in the world by nominal Gross Domestic Product, in the same league as Ireland and Norway. Its gini coefficient, measuring inequality, is .38, one of the higher in the industrialized world. France is .32, Norway is 26. Working-class Israelis face skyrocketing housing costs. The Israeli government offers behind-the-scenes subsidies for Israelis to squat on Palestinian land instead.

Political scientist Ian Lustick has estimated that as many as a million Israelis live abroad. Some say the Middle East conflicts make them nervous. Others have fled because they are liberals or leftists who are tired of harassment by the dominant far right. Some 20,000 Israelis prefer to live in Germany, along with a total of 200,000 Jews, many of them from the former Soviet bloc, who preferred to emigrate there than to Israel.

One ranking puts the Israeli military at 17th in the world, in the same league as North Korea and Indonesia. The country punches way above its weight, with some 8 million citizens, but it isn’t a superpower. In fact, it receives $3.8 billion a year in direct welfare payments from the United States, and the transfers are much bigger if sweetheart US tariffs and other benefits are counted.

Netanyahu is enormously unpopular among younger Americans, including among younger Jewish Americans, and his Apartheid state is losing the support of much of the Democratic Party. If he has won, it is hardly good news for Israel.