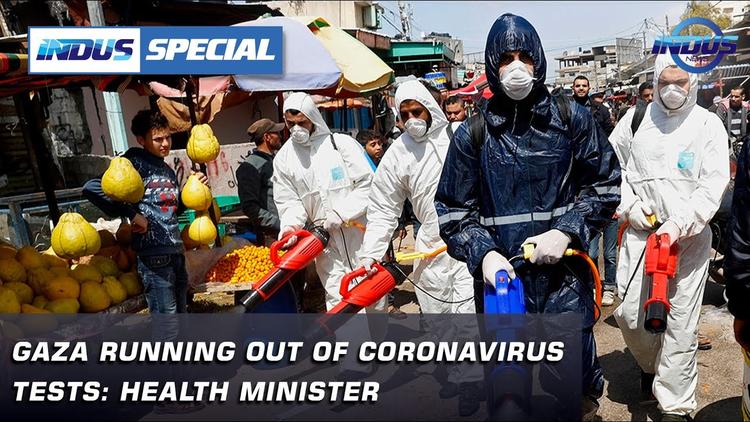 ( Middle East Monitor) -In recent days, Hamas and Israel witnessed a clear row over providing medical assistance to the Gaza Strip to counter the coronavirus, as Israel stipulated the return of its soldiers captured in the 2014 war as a condition of providing medical assistance. The Israel media has been calling for Hamas to release the soldiers in order to receive help to combat the coronavirus.

As for Hamas, it announced that it will obtain these humanitarian needs by force, through its leader in Gaza, Yahya Al-Sinwar, who announced that “six million Israelis may have to stop breathing” if Israel is unwilling to supply the Gaza Strip with the necessary respirators for coronavirus patients.

Meanwhile, Al-Sinwar hinted that Hamas might make a concession regarding the exchange deal in return for allowing the entry of supplies to improve living conditions and medical assistance in Gaza, as well as releasing elderly, sick, children and female Palestinian prisoners. Israeli Prime Minister Benjamin Netanyahu responded by charging Yaron Bloom, Israeli coordinator of POWs and MIA Israeli prisoners, with initiating the necessary calls to resume prisoner exchange deal negotiations with Hamas.

This back and forth means that it is possible that Hamas and Israel will witness a round of military escalation, because the Palestinian factions are seeking to pressure Israel to agree to allow the entry of medical supplies and health assistance to Gaza, in order to fight the coronavirus. Rockets were fired at Israel from Gaza a few days ago, and this raises questions on how both sides will deal with any military escalation, or how they will reach an exchange deal. Will we witness an undesired military confrontation during this disastrous health situation in Gaza and Israel, or will negotiations finally take place to reach a new prisoner exchange deal between the two sides?

A few days ago, the Israeli army announced that it had bombed Hamas positions in the Gaza Strip, in response to a missile fired from it towards the Gaza envelope settlements. Thousands of Israelis rushed to take shelter, although it was the first escalation since the emergence of the coronavirus crisis in February, as Palestinians and Israelis are remaining in their homes to stop its spread.

Neither Palestinian faction has claimed responsibility for the rocket launch, but the Israeli bombing of Hamas positions was carried out because of Hamas’ control over Gaza. The Palestinian factions announced that Israel was taking advantage of the world’s preoccupation with confronting the coronavirus in order to intensify the Gaza blockade.

However, the atmosphere in the Gaza Strip indicates that its health crisis, resulting from the detection of several coronavirus cases in Gaza, may push Hamas to pressure Israel to ease its blockade on Gaza. Israeli circles warned against what it described as a bleak scenario resembling the Day of Judgement, if Gaza exploded in the face of Israel with the spread of the coronavirus in Gaza.

Hamas has confirmed, from time to time, that Gaza is experiencing catastrophic conditions under the Israeli blockade and that Israel alone is responsible for its continuation. Hamas is communicating with mediators to force Israel to lift the Gaza blockade, in light of the coronavirus pandemic that exacerbated the situation. It noted that the continued blockade on Gaza is not conducive to maintaining security calm. While Hamas has not explicitly admitted responsibility for firing rockets at Israel, it also did not deny it, surrounding the issue with mystery and ambiguity.

The Hamas-run government follow-up committee in the Gaza Strip announced that the government authorities in Gaza need support from inside and outside, to confront the virus. It revealed the allocation of $1 million of urgent relief funds to 10,000 low-income families affected by the measures, and the employment of 300 new staff members in the Gaza Ministry of Health. Hamas leader Ismail Haniyeh discussed with a number of Palestinian, regional and international parties, the effects of the spread of the coronavirus in Palestine.

Palestinian views agree that Hamas and Israel have no interest in a military escalation under the coronavirus, but the launch of the Gaza missile may be part of the security disorder by armed militants that Hamas is trying to control. Moreover, Israel fears the spread of the virus in Gaza for fear that the international community will hold it responsible for Gaza, so it may grant some facilitations, such as allowing the entry of medical equipment and preventative medical supplies, as well as mobilising financial support in light of economic paralysis in Gaza, following the outbreak.

The most important requirements that Gaza needs to tackle the coronavirus are medical supplies: respirators, supplies to test for the virus, food supplies, and aid for Gazans suffering from the measure taken to fight the pandemic.

It is worth noting that Gaza is capable of only dealing with 100-150 coronavirus cases because its health system is fragile and cannot respond to large numbers. It has a modest number of ventilators and ICU beds, as well as a 39 per cent drug deficit.

While the recent escalation in Gaza may not be linked to a specific Palestinian organisation, it may send a message indicating that Israel bears the responsibility for exhausting the health situation in Gaza, which will suffer a major catastrophe if the coronavirus spreads amongst its people. Whoever fired the rocket, is seemingly demanding that Israel lift the blockade on Gaza. Israel is interested in meeting Gaza’s health and living needs, because if the pandemic spreads amongst the Palestinians, it will push them to explode and launch dozens, if not hundreds, of rockets. They may even flock to the Israel-Gaza border to save themselves from the pandemic.

With the continuation of the procedures to confront the coronavirus in Gaza, the government authorities in Gaza affiliated with Hamas, are, among other measures, subjecting travellers returning to Gaza through the Rafah crossing with Egypt and the Beit Hanoun crossing with Israel, to compulsory quarantine for 21 days. They have also closed all mosques, universities, schools, markets, wedding halls and restaurants until further notice. They are also studying the possibility of imposing a complete curfew, along with asking Palestinians to stay in their homes permanently.

All these measures contributed to the growing suffering of vulnerable groups such as drivers, and wedding hall, restaurant and café employees. Perhaps the monthly Qatari grant of $100 distributed to 100,000 needy families in Gaza relatively reduces the effect of Israeli siege of Gaza and revives its deteriorating economic situation, even though this Qatari grant was part of the humanitarian understandings between Hamas and Israel agreed in October 2018.

In recent days, Qatar announced that it would provide $150 million in financial support to the Gaza Strip over a period of six months, to alleviate the suffering of the Palestinians, and to help combat the coronavirus, without clarifying the nature of the distribution of the grant and the beneficiaries.

Meanwhile, the Ministry of Social Development in Gaza provided all meals for those quarantined in health centres, amounting to 6,000 meals a day. They also provide supplies needed by those quarantined, such as refrigerators, electrical and household appliances. The ministry also recorded the number of families affected by the state of emergency imposed by the coronavirus, and these families will be reached and helped.

All this confirms that the health and economic conditions in Gaza are dire, the basic needs of the Palestinians are not being met, and what the international agencies and the Palestinian Authority (PA) provide is only a small part of it. The government agencies in Gaza provide food and drinks to 1,600 Palestinians in quarantine centres, and these agencies are already suffering from a large financial shortage, requiring an urgent financial injection.

The launch of a missile from Gaza at Israel may be a Palestinian message to Israel that the conditions in Gaza are not acceptable, and that any Israeli attempt not to respond to Gaza’s humanitarian and health demands may mean that the missiles will increase in the coming period. However, it is unlikely to become a fully-fledged confrontation between Hamas and Israel, but rather a round of escalation lasting several days if the virus spreads dramatically in Gaza.

Middle East Monitor learned from Palestinian sources that Hamas sent messages to Israel through regional and international mediators that: “The movement holds Israel directly responsible for the deteriorating living and health situation in Gaza, and will not remain idle in the face of the spread of the coronavirus, because Hamas believes Israel is obliged to save the deteriorating health system with direct aid from them, or through the PA or international agencies.”

Hamas has not claimed responsibility for firing rockets into Israel, and it may not be in its interests to engage in a massive military confrontation. However, the current worsening conditions in the Gaza Strip, the increase in coronavirus cases, the lack of sufficient medical equipment to examine patients, and the lack of financial support necessary to compensate those unable to work as they are forced to stay home, may result in an intensifying ripple effect. Hamas may engage in a round of escalation with Israel to pressure it to provide the deficient supplies in Gaza. Hamas predicts that Israel will respond to its demands in order to be free to deal with the large-scale spread of the coronavirus among the Israelis.