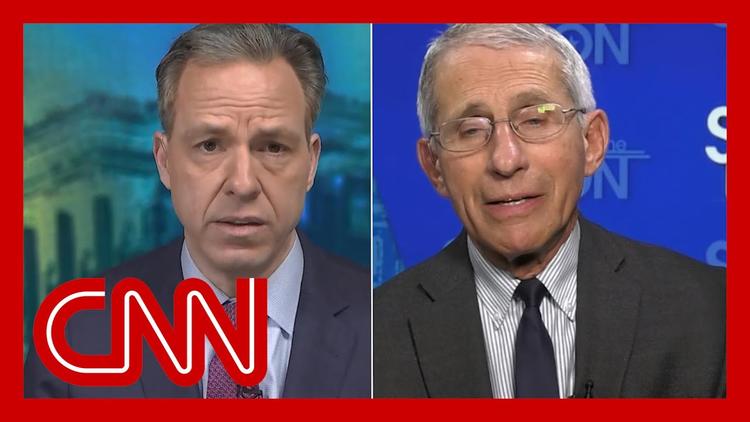 Ann Arbor (Informed Comment) – When Jake Tapper repeatedly pressed Dr. Anthony Fauci on Sunday to say whether earlier social distancing measures, say in February rather than March, would have saved lives, Fauci allowed for the possibility. Fauci is the director of the National Institute of Allergy and Infectious Diseases and heads up the Trump administration’s Covid-19 task force.

“I mean, obviously, you could logically say that if you had a process that was ongoing and you started mitigation earlier, you could have saved lives. Obviously, no one is going to deny that. But what goes into those decisions is complicated. But you’re right, I mean, obviously, if we had right from the very beginning shut everything down, it may have been a little bit different. But there was a lot of pushback about shutting things down back then.”

Fauci also implicitly recognized that Trump blew off his and others’ recommendation to begin social distancing in February:

“You know, Jake, as I have said many times, we look at it from a pure health standpoint. We make a recommendation. Often, the recommendation is taken. Sometimes it’s not. But we — it is what it is. We are where we are right now.”

I watched the interview unfold with a sense of dread. Fauci is too much of a straight shooter to dance around the facts. A politician would just have said, “what is past is past, Jake, we’re focused on now and on the future.” And I kind of wish Fauci had said that.

Trump immediately after retweeted a tweet calling for Dr. Fauci to be fired.

Trump has a history of chafing at strong advisers and cabinet members, and of firing them if they put up too much resistance to his crackpot idees fixes. He got rid of both H. R. McMasters and John Bolton at the National Security Council (the first was a bad call, the second a good one). He got rid of James Mattis as secretary of defense, replacing him with the docile former arms industry lobbyist Mark Esper. He got rid of secretary of state Rex Tillerson in favor of the notorious sycophant Mike Pompeo. He fired the secretary of the navy for objecting to his pardon of a convicted serviceman. Then the acting secretary of the navy, Thomas Modly tried to please Trump by firing the captain of the USS Roosevelt for raising alarms about Covid-19 on his ship. But Modly’s dismissive comments about the captain got out, and Modly had to resign. Now Trump is summarily firing inspectors general, and generally acting like a dictator.

High officials around Trump have to suck up to him frequently and publicly, or they won’t be around after a while.

Trump could well get tired of being contradicted by Dr. Fauci, and we know he fires people at the drop of a hat. Trump is perfectly capable of installing some suck-up crony as head of the coronavirus task force, someone who would be all right with declaring the pandemic over. Trump has an irrational dislike of the large scale testing and contact tracing method South Korea used to get back to work, and without Fauci there to champion testing, it could fall by the wayside, condemning us to waves of outbreaks and 18 months of on again off again shutdowns.

The models suggest that if the US opens for business too soon, it could produce a massive Second Wave of infections that will overwhelm hospitals. Lose Fauci, and the country could go back up toward the high end of fatalities. The initial CDC modeler estimates were 200,000 to 1.7 million dead if we did nothing.

The NYT reported on Saturday that Centers for Disease Control scientists had decided to press Trump on social distancing measures as soon as he returned from his late February trip to India, having become alarmed by reports from China that asymptomatic carriers of Covid-19 were infecting others at a high rate of transmission. But public remarks by Dr. Nancy Messonnier at the CDC spooked the stock market, and Trump fumed all the way home from New Delhi, determined to talk the markets back up and reassure them. His pigheadedness and focus only on the markets as a bellwether over his reelection cost the country a crucial 3 weeks, and the 22,000 now dead were set up for their demise by that delay.

Trump never wanted to close down the country, and only when his campaign’s polling showed that his reputation couldn’t survive allowing thousands of people to die, such that his reelection would anyway be in doubt, did he order social distancing on March 16. Trump is chafing all through April. He wanted to reopen things, at least in the Republican-governed states, by yesterday, Easter, but was warned that such a measure would just start back up the countdown to a really big death toll. With effective social distancing, the deaths can possibly be kept to 60,000 – 100,000. Opening things back up too soon, and in the absence of large scale testing and contact tracing, could push that tally substantially higher.

Trump now wants to reopen at the beginning of May, which many governors warn is too soon. A recent New York state model suggests that to avoid a massive Second Wave of coronavirus infections, the distance people keep between themselves and others may have to be increased from 6 feet to more, and people may have to stay inside all summer.

CNN: “Tapper asks Fauci: Do you think lives could have been saved?”