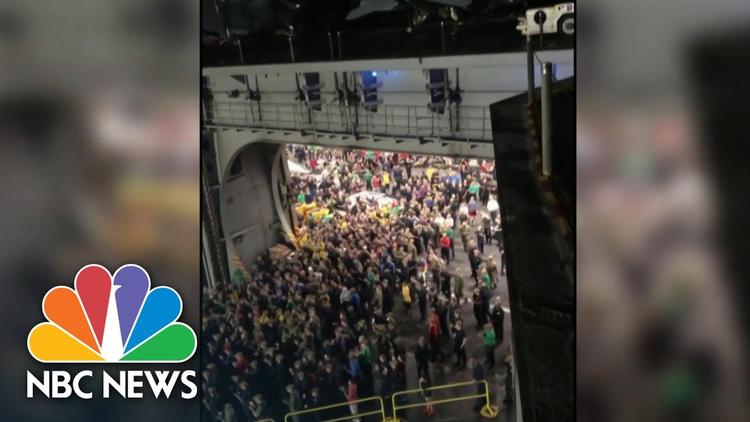 Ann Arbor (Informed Comment) – Capt. Brett Crozier of the USS Theodore Roosevelt is a national hero, as his crew recognized when they cheered uproariously as he left his ship for the last time. Crozier had provoked the Navy to let the crew of 5,000 debark at Guam. Some 100 of them tested positive for the coronavirus, and if they had been forced to remain at sea in close quarters, all of them would have been infected and 50 to 100 would have died. If terrorists threatened to kill 100 sailors on a US destroyer, all of Washington DC would be jumping up and down demanding an extra $1 trillion in counter-terrorism spending. But nobody was willing to do anything about the USS TR being a floating death trap.

We need more Croziers, not fewer. The Trump administration has forced him to retire because his letter warning of large scale deaths on his ship somehow made its way to the San Francisco Chronicle.

One of those grey “acting” high officials — with whom Trump has surrounded himself in preference to actual confirmed cabinet secretaries and undersecretaries — forced Crozier out. Acting Navy Secretary Thomas Modly said Crozier should have gone to his immediate superior instead of writing his letter. (Crozier did go to his superior, without that producing any result). Modly said that Crozier copied too many people with his letter by email, which allowed it to get leaked. What Modly really means to say is that Crozier should not have written the letter at all and should not have gone outside his chain of command. Modly got the go-head for the ouster of Crozier from secretary of defense Mark Esper.

Modly is “acting” because his predecessor would not go along with Trump’s rehabilitation of a Navy Seal who was convicted of violating Navy rules.

Crozier is a better man than Modly by orders of magnitude. As Acting Navy, Secretary Modly was certainly briefed repeatedly in January and February on the dangers of the coronavirus to the United States public and to the US Navy. What did he do about that, as he sat around watching Trump call the deadly pandemic a “hoax,” a “nothing,” “like the flu,” and promising it would go away quickly whatever it was? Modly knew that Trump was lying to the American public and that his lies would cost hundreds of thousands of American lives.

By February 8, top Federal scientists had figured out that the Trump test kits didn’t work and they were going ballistic over the increasing danger to the public. Modly’s security briefings would have given him knowledge of the dangers as well. The same goes for secretary of defense Mark Esper.

Modly stayed silent. He could have resigned and blown the whistle. He did not. He would, admittedly, have forfeited thereby the cushy positions that accrue to former high government officials in good odor with the Republican establishment– the interlocking directorates on the corporations, the cash under the table for calling an old buddy in the Senate about buying some useless new toy of a weapon. But so what? He wouldn’t starve. He is not honorable the way that Brett Crozier is honorable.

“This will require a political solution but it is the right thing to do . . . We are not at war. Sailors do not need to die. If we do not act now, we are failing to properly take care of our most trusted asset — our Sailors . . . Due to a warship’s inherent limitations of space, we are not doing this . . . The spread of the disease is ongoing and accelerating . . . Removing the majority of personnel from a deployed U.S. nuclear aircraft carrier and isolating them for two weeks may seem like an extraordinary measure. … This is a necessary risk, . . . Keeping over 4,000 young men and women on board the TR is an unnecessary risk and breaks faith with those Sailors entrusted to our care.”

The real question is not why grey bureaucrats might oust a man like Crozier. That is obvious. The real question is why Mark Esper and Thomas Modly did not go public about Trump’s fatal insouciance in the face of the greatest security threat to the United States in the twenty-first century.