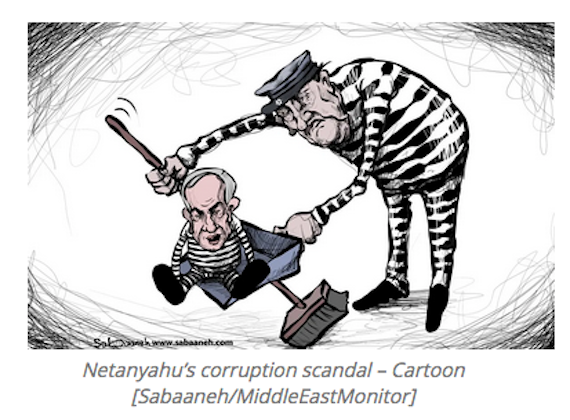 ( Middle East Monitor ) – Shortly after an agreement to form a “national emergency government” in Israel, leader of the Blue and White (Kahol Lavan) party, Benny Gantz, tweeted triumphantly that ‘democracy’ in Israel has been ‘safeguarded’.

But how is a deal that would grant Israel’s right-wing Prime Minister, Benjamin Netanyahu, a veto power over the very judicial system which will determine his fate, a form of democracy?

In January, Netanyahu was indicted on multiple counts of bribery, fraud, and breach of trust. His trial is scheduled for May 24.

By making such an assertion, Gantz is simply deluding himself, following one the most disgraceful acts of political betrayal in the country’s modern history. By agreeing to join Netanyahu’s Likud party, Gantz has demolished his own parliamentary group which unified several major parties in one single bloc, all with the aim of removing Israel’s longest-serving leader from power.

The Blue and White, which until recently consisted of three parties (Hosen Li-Israel, Yesh Atid and Telem), presented itself to Israeli voters as a political force that would finally restore some credibility to Israel’s ailing political institutions.

Clearly, Israel was not ready for such a mission.

It is convenient to blame Gantz for the collapse of Israel’s once-burgeoning opposition, but the problem with Israel’s political elites is far more complex than that of a single individual.

Israeli leaders insist that democracy, transparency, and inclusion are achievable, even when millions of the country’s Arab citizens are marginalized and continue to be victims of institutional racism that dates back to the very foundation of Israel.

In actuality, Gantz could have formed a government with the help of the Joint List, a coalition of Arab and progressive parties, which is the only Israeli political bloc that represents hope for a better, more inclusive future.

The supposed Israeli ‘centrist’, however, opted to join Netanyahu – and to, consequently, alienate his own allies, Yesh Atid and Telem – than meet the reasonable conditions of the Joint List.

The Joint List, which had eventually endorsed Gantz to form a government, had merely requested the removal of the Nation-State Law (which defines Israel as a Jewish State), the Kaminitz Law (which restricts building in Arab communities in Israel) and ending the Israeli occupation of Palestine, in accordance with international law.

The Arab parties’ demands were simply too much for Gantz to handle, for several reasons.

One, Gantz is essentially a right-wing politician and a military hawk, who favors the annexation of the occupied Palestinian territories and has called for even harsher wars on Gaza.

Two, the Blue and White would have never been able to build a wider coalition if it adhered to any of these demands. This much was made clear by the head of Yisrael Beiteinu leader, Avigdor Lieberman.

Three, Member of Knesset (Parliament) Zvi Hauser, one of the most influential figures of the Blue and White, is among the main forces behind the racist Nation-State Law of July 2018. Expecting Hauser to cancel the jewel of his political achievements would be most unrealistic and would have further destabilized a party that has already lost nearly half of its supporters in a matter of days.

Hauser is an interesting character, an ambitious politician and a person to watch, as he will play an important future role in Israel’s coalition government.

Hauser will now become the “proverbial long arm of the Judicial Appointments Committee,” according to Yossi Verter, writing in Haaretz. This committee, in particular, was the main stumbling block in the difficult negotiations, which preceded the announcement of a government coalition deal between Gantz and Netanyahu.

According to the deal, Netanyahu can accept or reject any of Hauser’s future appointments. Hauser is unlikely to find Netanyahu’s interference unacceptable, simply because he is used to the idea of being Netanyahu’s point man.

Yes, indeed, Hauser entered public service in 1994 to serve as the Likud party’s spokesman under Netanyahu who, at the time, was the country’s opposition leader. In fact, Hauser’s political career throughout the years seems to be intrinsically linked to Netanyahu’s own.

And here, yet, is another common ground between the Likud and the Blue and White, which could make the planned annexation of parts of the occupied Palestinian West Bank and Jordan Valley very much possible.

The text of the coalition government agreement spoke of potential annexation of parts of the occupied territories as early as the summer, in accordance with the US President Donald Trump’s “Vision for Peace”.

This understanding was by no means a concession on the part of Gantz, who, too, supports some form of annexation.

That’s where Hauser’s role becomes vital once more, for it was Hauser himself who headed the ‘Coalition for the Israeli Golan’, which championed and promoted Israel’s sovereignty over the occupied Syrian Golan Heights.

Hauser’s wish received a huge boost in March 2019, when Trump signed the order recognizing the Golan Heights as Israeli.

Despite its difficult birth and the Blue and White setback, the Netanyahu-Gantz coalition has more in common than meets the eye:

For one, Gantz seems to have abandoned his strategy of getting rid of Netanyahu through the court system. With Hauser as a middle man, Netanyahu, at least for now, is somewhat safe.

Secondly, not only is the annexation of Palestinian territories (despite strong Palestinian and international rejection to such a move) not a point of contention between the coalition partners but a point of agreement as well.

Thirdly, with Gantz’s rejection of a coalition that includes the Joint List, and Netanyahu’s complete disregard for the Palestinian leadership in the West Bank and Gaza, Palestinians are entirely erased from the political map of Israel’s ruling elites. This is unlikely to change in the future as well.

There is one positive aspect of Israel’s unpromising government coalition, and that is clarity. Knowing of Netanyahu’s anti-Palestinian, anti-peace, and anti-international law long legacy, we should have all the clarity needed to understand that no just peace can possibly be achieved when Netanyahu is still at the helm.

The same can be said of Gantz as well, who preferred to willingly shake the hand of the devil than to find common ground among the leaders of Israel’s Palestinian Arab community.

Even when Netanyahu’s eighteen-month term as Prime Minister expires, a Gantz-led Israeli government is unlikely to fare any better.