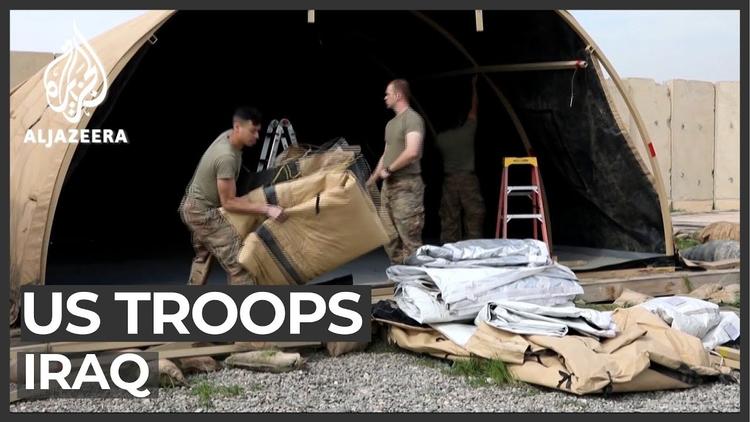 Ann Arbor (Informed Comment) – AFP quotes Trump as saying at a news conference and then on Twitter:

“”We don’t want hostility, but if they are hostile to us, they’re going to regret it like they’ve never regretted anything before . . . If this happens, Iran will pay a very heavy price, indeed! . . . Upon information and belief, Iran or its proxies are planning a sneak attack on US troops and/or assets in Iraq.”

Trump’s posture in Iraq is that of a man sitting high up in a tree on a branch and sawing away at it on the side closer to the tree trunk. The NYT reports that he is having his Pentagon plan a violent campaign of extermination against the Brigades of the Party of God (Kata’ib Hizbullah), whose leader Trump blew away on January 3 along with Iranian general Qasim Soleimani. Even the top US commander in Iraq, Lt. Gen. Robert P. White, wrote a frank letter warning against such a course of action.

White pointed out that a feud with a major Shiite militia would embroil the US in a new round of fighting, would require a substantial escalation in troop strength on the ground in Iraq, and would interfere with the US military mission of training Iraqi troops to fight the remnants of ISIL, the terrorist group that once claimed to be a “caliphate.”

Washington does not appear to understand that the Popular Mobilization Forces (PMF), to which US journalists and politicians often refer to as Shiite militias, are actually part of the Iraqi government. In 2018 Parliament recognized them as a sort of National Guard, to be integrated with the Iraqi military. These paramilitaries also spun off political parties, and their joint coalition won 40 seats in parliament in the last election, making them the second-largest Shiite party. For the US to make war on them is for it to make war on a key part of the Iraqi government itself.

In its attacks on the Brigades of the Party of God in late December and since, the US has alienated much of Shiite Iraq against itself. In January Parliament voted a binding act requiring the prime minister to find a way to move US troops out of the country.

The Popular Mobilization Units, in turn, have waged a low-intensity campaign to get US troops out of Iraq, with attacks on bases where they are stationed that have left two US servicemen dead and several others wounded, along with a British servicewoman. They have also subjected the US embassy to rocket or mortar fire, though so far they have not hit the building or injured any Americans there.

Although Washington codes the PMF as Iranian proxies, they are Iraqi forces whom many Iraqis see as national heroes for their role in defeating ISIL (at a time when the US-built Iraqi Army had collapsed). In fact, at a time when the US joint missions against ISIL with the formal Iraqi military have been frozen because of the coronavirus, the Popular Mobilization Forces are still actively fighting ISIL in provinces such as Diyala. There is no evidence that they are attacking bases where US soldiers are stationed because Iran told them to. They now have a feud with the US, after Trump blew away Abu Mahdi al-Muhandis at Baghdad International Airport.

An adviser to the Iraqi military, a Mr. al-A’sam, said this week that the US military in Iraq is intensively spying on the Popular Mobilization Units, seeking Iraqi informers in the Baghdad government as well as deploying drones to fly over PMF bases.

Nevertheless, the PMF were in part trained and funded by Iran. AP reports that Esmail Ghaani, Soleimani’s successor as head of the Jerusalem Brigade of the Iranian Revolutionary Guards Corps, is in Baghdad this week in a bid to unite the PMF, which is beset by internal disputes. He may also be attempting to ward off the installation of Adnan al-Zurfi, a pro-American conservative, as the new prime minister. Al-Zurfi was proposed by Iraq’s pro-American Kurdish president, but faces steep opposition in parliament and from the paramilitaries.

Iran or no Iran, it seems likely that at some point a PMF group will in fact again attack US troops in Iraq. Is Trump setting up a scenario where he can blame any such attack on Iran, and then use that as a pretext to bomb Iranian soil? Although Trump has resisted the entreaties of far right uber-hawks in his administration to bomb Iran on several occasions, he may be weakening on that score.

One reason for Trump’s saber-rattling against Iran may be that he hopes a conflict with Iran could in turn take the mind of the public off his criminal mishandling of the coranavirus threat domestically in the US. Presidents have been known to resort to military action in a bid to keep or regain their popularity at home. After a 1990 film, that move is now called “wagging the dog.”

Trump may be among the few presidents not to have a dog while in the White House. But that won’t stop him from wagging one.