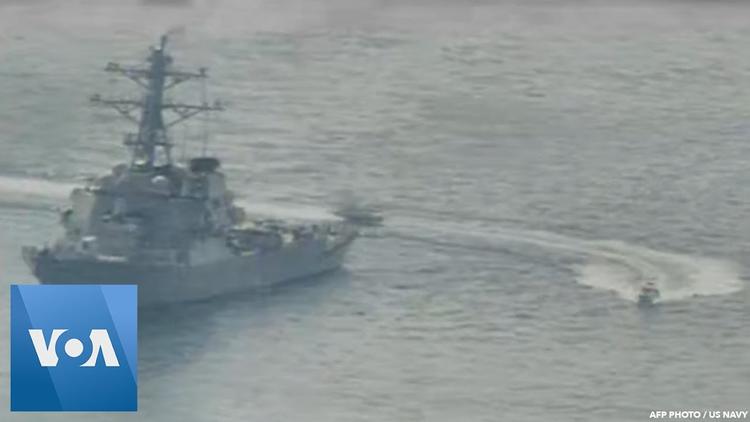 Ann Arbor (Informed Comment) – The diarist and attorney James Boswell recorded that the writer Samuel Johnson remarked on the evening of April 7, 1775 that “Patriotism is the last refuge of a scoundrel.” He wasn’t condemning a healthy love of country but the manipulation of public opinion for narrow sectional purposes. Johnson might observe of Trump that jingoism is the last refuge of a scoundrel. Trump gained popularity by promising conflict with China over the decline of US manufacturing. (Manufacturing turned down last year and this year won’t be good for it, China or no China).

Trump’s dog and pony show touting his coronavirus performance (those two months he pissed away calling it a hoax and setting up the country for Vietnam War-level death tolls) is sending his ratings into the dumpster.

So Trump throws gobs of mud at the wall to see if it will stick.

The mud this week is threatening to “shoot down” tiny Iranian skiffs that have been taunting massive US destroyers in the Gulf. Millions of actual English-speakers on social media pointed out that you can’t shoot down a boat, since they don’t typically fly in the air.

Also, the Iranian craft in question are indeed little “fast boats,” not “warships” as some media have been calling them. Take a look for yourself:

That’s kind of like an ant crawling up an elephant’s behind with rape on its mind.

Seriously, even a tiny boat that is armed could represent a threat to US naval personnel on deck, so the Iranian Revolutionary Guards Corps, in engaging in this taunting last week, was acting in a stupidly provocative way. The skiff pointed its machine gun at the US vessel.

But let us face it, US warships have rather heavier armaments than a machine gun, and can wipe the mat with those little skiffs anytime they like.

And this dance has been going on for years– Bush-Cheney were also exercised about it 14 years ago.

Amir Vahdat at AP reported that Iran acknowledged the incident, but blamed the US for interfering with its drill.

Trump’s tweet that the US Navy should fire on Iranian vessels behaving in this way doesn’t have the force of law and is a little unlikely to be acted on by US Navy captains, who typically know the law of the sea.

What Trump was advising would be a war crime, since Iranian boats that haven’t actually fired on or harmed US vessels have a right to be on the high seas, and interfering in that right to the point of termination with extreme prejudice is illegal.

US administrations have for decades been trying to build up Iran in the US public’s mind as a peer threat, even though Iran has a tiny navy, mostly frigates and patrol boats, and no destroyers (one is allegedly planned). Iran’s annual military budget before its recent woes was on the order of Norway or Singapore. It also has a very small air force, with many planes ancient, like the Nixon-era F-4.

Iran simply is not a military threat to the US, which is precisely the sort of adversary Washington DC loves. You can’t go to war with nuclear states like China or North Korea, but an Iran presents a tempting target that would make the US arms industry a lot of money and keep the US public in line. I still get angry every time I think about George W. Bush calling himself a “war president.” When you launch an elective, aggressive war of choice, you aren’t a war president, just a war criminal. It isn’t something that happened to you as with FDR. It was a choice, and there is no reason for the public to pay for your choice or cut you any slack or respect you more.

I doubt that Trump’s tweet will last longer than his memory of calling the coronavirus a hoax has. He’s just seeing if he can get a rise from his base by … acting like a scoundrel.