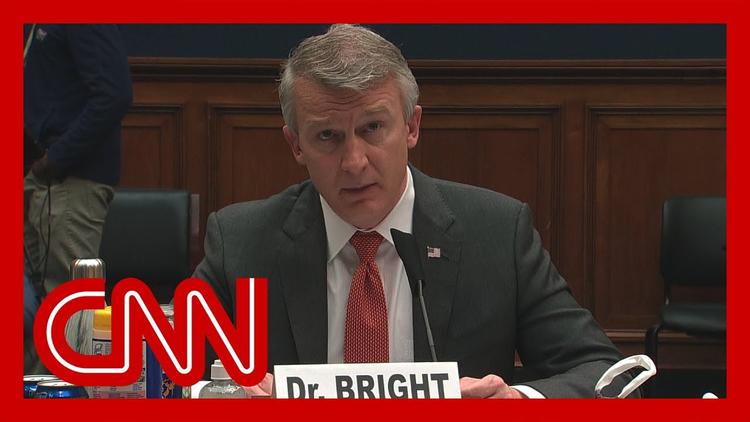 The testimony of Dr. Rick Bright on Thursday was a remarkably low-key affair given the bombshell revelations Ruiz divulged of the paralysis, inaction and frankly stupidity of the Trump administration regarding the looming coronavirus catastrophe back in January and February. We all saw Trump himself say stupid things like that the virus was a hoax or that there were only 11 cases in the US and that would soon be zero, that it would just go away, like a miracle, that it would disappear in April when the weather started warming up, that we should drink bleach to deal with it (well it certainly is the case that there isn’t much a virus can do to a corpse).

In his prepared testimony, Bright warned that if the Trump administration continued to mishandle the crisis we could face a second, bigger wave of the novel coronavirus this winter at the same time as flu season hits (flu seems to kill about 35,000 people in the US every winter). He said it could be “the darkest winter in modern history.”

Bright is the former director of the Biomedical Advanced Research and Development Authority (BARDA) at the Department of Human Services who says that his warnings about Covid-19 were studiedly ignored by the department all through January, February, March and early April before he was unceremoniously kicked out as director of BARDA on April 20 for resisting pressure to recommend treating Covid-19 with hydrochloroquine even without the supervision of a physician. He was reassigned to the National Institute of Health.

I include an excerpt below of the questioning of Dr. Bright by Rep. Raul Ruiz (D-Ca.), and have bolded the most alarming exchanges. Ruiz is an ideal questioner because he is himself a physician and has a degree in public health. Indeed, Wikipedia says:

“Born in Zacatecas City, Mexico, Ruiz grew up in Coachella, California. He was the first Latino to receive three graduate degrees from Harvard University, attending Harvard Medical School, the John F. Kennedy School of Government and Harvard School of Public Health. He worked as an emergency physician at the Eisenhower Medical Center in Rancho Mirage, California, before assisting humanitarian efforts in the aftermath of the 2010 Haiti earthquake.”

Trump keeps saying Mexico sends their worst people and we need a wall to keep them out, but if only we could trade Trump for a thousand Raul Ruizes, we’d improve the country a hundred thousand fold (99,000-fold in getting rid of Trump, plus a thousand-fold in getting all those Ruizes.) Surely Mexico needs some shitty overpriced hotels?

Ruiz is a highly admirable man, who has both firmly grounded scientific knowledge and an impulse to act bravely in the real world. If we had 535 like him in Congress, our country would be light years ahead of where it is now.

Ruiz laid out the case better than the attorneys could.

2. Procuring and distributing Remdesivir, the most likely candidate for a medicine that would help treat Covid-19.

3. Mounting a Manhattan project to create an effective vaccine.

He also wanted to see an effective Federal distribution effort for these materiel instead of having the states scramble and compete with each other. (He did not bring up Jared Kushner actually stealing PPE from the states and giving them to his friends at Fox News).

Ruiz elicited from bright the information that he and others at the Department of Health and Human Services discussed these three needs in February, but that the Trump administration did nothing on any of them.

In fact, we know that the Trump administration actually sent enormous amounts of PPE out of the country! “The State Department announced Feb. 7 that it had “facilitated the transportation of nearly 17.8 tons of donated medical supplies to the Chinese people.” These included, incredibly, masks for medical personnel.

Bright was forced out for refusing to promote hydrochloroquine as a treatment for Covid-19 without close physician oversight, as demanded by Trump and his superiors. That drug has been found to cause heartbeat irregularities and to weaken the heart in dangerous ways, and some small trials have found no benefit of the drug for Covid-19 patients. Trump just has a fixation on it, as part of his showmanship and desperation to get reelected (he wanted his base to have hope that something works).

REP. RAUL RUIZ (D-CA): … We are now seeing the very real dangers and consequences of not making decisions based on science. Hydroxychloroquine, which Fox News commentators and then the White House repeatedly touted and actually encouraged people to use is exhibit A on this list.

But there is one drug that appears to provide some therapeutic benefit, Remdesivir. Two weeks ago Dr. Fauci announced that Remdesivir showed a clear cut significant positive effect in diminishing the time to recovery.

My understanding is that in January and early February, you launched a comprehensive review to assess which existing drugs may prove a therapeutic benefit and you quickly identified Remdesivir as the most likely drug to be effective against COVID-19. Can you describe how you came to that conclusion? Who you told within HHS and what their response was?

BRIGHT: Yes, Sir. That conclusion was came about by a technical review from number of scientists within HHS to the CDC, FDA, NIH, and BARDA. But it was also aligned with the scientific assessment from WHO and a number of global experts, who rapidly looked at every potential drug and ranked Remdesivir as the drug that had the most potential for benefit…

RUIZ: And so you had a discussion and what was their response? Did anything happen?

BRIGHT: No decision was made at that time.

RUIZ: OK. My understanding is that Peter Navarro, the White House trade advisor reached out to you on February 7th to seek your counsel. You told him about your top three concerns,

the shortage of N95 masks,

the need for a, quote unquote, Manhattan project to develop vaccines and

Can you tell us if Mr. Navarro agreed with you and what steps you and he took?

BRIGHT: Mr. Navarro did agree with me on the Remdesivir, with the N95 masks, and the vaccine, Manhattan project. And he drafted a memo on February 9th to the White House Chief of Staff and Mick Mulvaney to share with the White House Taskforce.

RUIZ: The director for HHS to act on Remdesivir occurred on February 10th. What happened next? And did the department promptly procure the needed supplies of Remdesivir?

BRIGHT: We did not proceed with procuring any supplies of Remdesivir.

RUIZ: OK. You were removed from your position on April 22nd. By time you were removed, had the department settled on a plan and procured the Remdesivir?

BRIGHT: No, sir. They were still discussing —

BRIGHT: — slide presentations about potential donations of Remdesivir at that time.

RUIZ: Doctors describe how they can obtain the drug and don’t understand the process for accessing it. Dr. Benjamin Linas from the Boston Medical Center said, quote, there’s no transparency. The process is just a staggering injustice. Dr. Bright, you were warning about this over three months ago if the department had listened to you and the other experts at your agency, could this fiasco have been avoided?

RUIZ: So it didn’t have to be this way.

CNN: “Richard Bright: This could be the darkest winter in modern history”