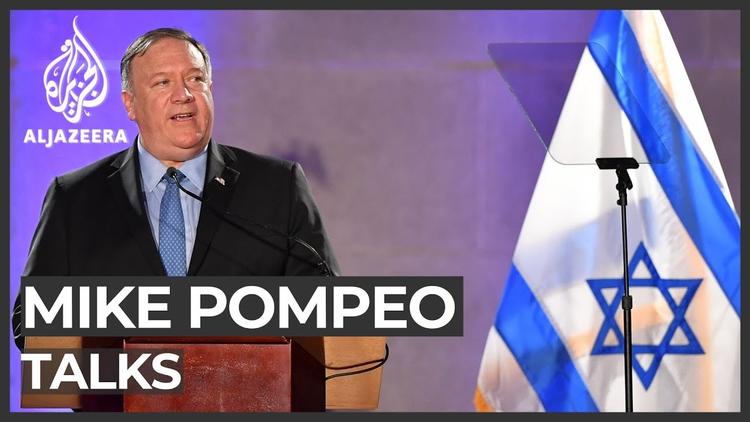 ( Middle East Monitor ) – US Secretary of State Mike Pompeo will visit Israel tomorrow for discussions with its leadership about annexation, among other issues. After politically facilitating the annexation process for Israel, Pompeo is attempting, and failing, to divert attention away from the role the US played in the recent colonial decision.

During the meeting with Israeli Prime Minister Benjamin Netanyahu and leader of the Blue and White Party Benny Gantz, Pompeo will just be “sharing views” on the annexation process. “I have said previously that this is a decision that the Israelis will make. I want to understand how the new leadership, the soon-to-be new government, is thinking about that,” Pompeo declared when asked about the purpose of the visit.

The so-called “deal of the century”, which Israel said it will implement unilaterally as benefits its political agenda, was described by Pompeo as meeting “the core requirements of both the Palestinians and the Israeli people.” The Palestinian leadership, albeit lacking any political vision, rejected the US-Israeli scheming. As Palestinian Authority leader Mahmoud Abbas scrambles for peace conferences, Pompeo’s visit to Israel is set to consolidate the annexation plans, despite US rhetoric attempting to sound cautious.

In an exclusive interview with Israel Hayom, Pompeo echoed US Ambassador to Israeli David Friedman, saying that the decision to extend sovereignty over settlements in the occupied West Bank is “Israel’s decision”. This decision, however, falls within the parameters of the international law manipulation which the US concocted for Israel’s demands.

Further asserting Israel’s contempt for international law, Pompeo reiterated that Israel’s decision-making reigns supreme. The US, according to Pompeo, is merely aiding in purported clarification. “We have clarified what we believe international law permits. And we recognise Israel’s right to make its own decisions.”

Putting it briefly, the US is clarifying what international law means for Israel and now framing the politics as being solely an Israeli decision. The international community, on the other hand, remains largely silent on the planned land grab and dispossession of the Palestinian people. Warnings, which are what the UN has issued so far, hold no political sway over Israel’s violation of international law. EU countries France, Belgium, Ireland and Luxembourg are among the most prominent in advocating that Israel’s annexation of the occupied West Bank should be challenged. Yet there is also a considerable chance of the bloc capitulating to Israel as evidenced by the words of an unnamed senior EU official: “There is clearly a need to look at what annexation means in the context of international law and we do need to know our options.”