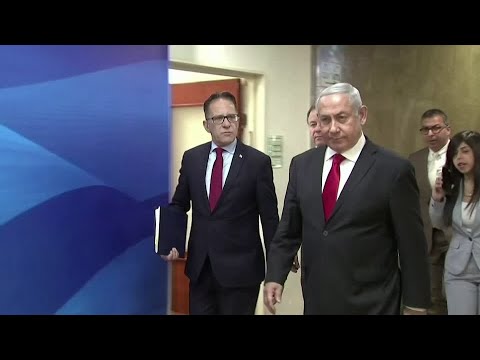 ( Middle East Monitor) – After a long and complicated process that lasted 18 months, the largest Israeli political factions, the Likud and Blue and White have formed a government . . .

Israeli journalist Oren Ziv told me that there is a crisis of confidence facing Netanyahu and stressed that the delay of the announcement of the government “is only a taste of what is to come”.

“Everything about Netanyahu was associated with corruption, bribe-taking, a lack of virtue, a danger to the rule of law, an assault on the courts and the state prosecutor, and an attempt to publicly end the career of the attorney-general,” former Israeli Prime Minister Ehud Olmert has said. “This operational mode, mafia-like by nature, is typical of Netanyahu, his son, and their gang of yes-men.”

Reflecting how far Netanyahu has deviated from the truth to achieve his personal and family interests at the expense of the public and the state, Olmert said: “Truth, facts and sources are all not important and they never were. In the age of fake news, it is possible to spread lies, build stories, and create false documentation that seems real and then spread them far and wide.”

The split of the Yamina alliance and the removal of Rabbi Rafi Peretz from it to join the government coalition caused unrest among the right-wing, many of whom accused Netanyahu of secretly removing clauses in the coalition agreement regarding the annexation of illegal settlements in the occupied West Bank.

“Netanyahu promised time and again he would apply sovereignty over Judea and Samaria [the occupied West Bank], it was the promise of the elections, but Gantz and Ashkenazi threatened Netanyahu and he capitulated and erased it from the foundational principles [of the coalition agreement],” former Defence Minister Naftali Bennett said in the press conference.

Israel: We are working hard to return our troops from Gaza

The minister, who was ousted as part of the new coalition deal, went on to attack Netanyahu for his failure to reform the Israeli judicial system. It seems that Bennett had remained silent about Netanyahu’s shortcomings in return for holding positions in government. “There was choice between Netanyahu and the right-wing bloc and Netanyahu chose Netanyahu,” Bennett added.

Several senior Likud officials have also voiced their distrust with Netanyahu. “Those who flattered Netanyahu got jobs and those who are professionals and have done their job well have come up empty,” a one party minister told the Jerusalem Post.

“There’s a limit to the disrespect!” Deputy Defence Minister Avi Dichter said as he was seeing Likud MKs far lower than him on the Knesset list being invited and given posts in the new government. “I have decided not to participate in the vote [on the government],” he said. “This is spitting in the face of 130,000 Likud members who elected me to Likud’s leadership ranks,” he raged, according to the Jerusalem Post.

However, Israeli journalist – with close ties to Netanyahu – Baruch Yedid, denied that a crisis of confidence in the prime minister existed within his party. “All what is going on is a trick by the Likud aimed to get some portfolios back from other parties who joined the coalition,” Yedid said.

“The idea that Netanyahu and Gantz would sit down and shake hands – or bump elbows as we do today to express personal affection – just weeks after the media were full of such strong language and vicious attacks by members of Likud was beyond the imagination,” Olmert said, referring to the fierce war of words between Netanyahu and Gantz prior to the coalition agreement.

“Moments before the new government was to have been sworn in, Gantz still behaved as they he couldn’t trust Netanyahu to keep his word over the course of a single weekend.”

Hating Arabs as a Common Ground: Why Israel’s Coalition Government is Likely to Survive

Gantz was due to resign from the Knesset prior to the signing of the coalition deal, but did not follow through with this. Ziv explained: “Gantz withdrew his resignation as he was not sure 100 per cent of Netanyahu’s intentions … Gantz has never trusted Netanyahu, but now he is using the coronavirus as an excuse to sit on the same table with him.”

Gantz had previously declared: “I am not able to sit [in government] with Netanyahu.”

“Friends, I am facing reality — I am telling you, we are speaking about a corrupt man who is destroying the country, and I cannot sit with him… Bibi is not a king and not the messiah and it’s possible to go on without him.”

The coalition will eventually be sworn in, but will always remain weak because of the lack of trust and the gaps in policies.

Through it all, Netanyahu remains the winner. He split a number of parties and, as a result, decimated any real competition that he faced. He has ensured sufficient backing in the Knesset that he can pass through the laws he is after; in particular an immunity law which would allow him to avoid trial and possible jail term on corruption charges.