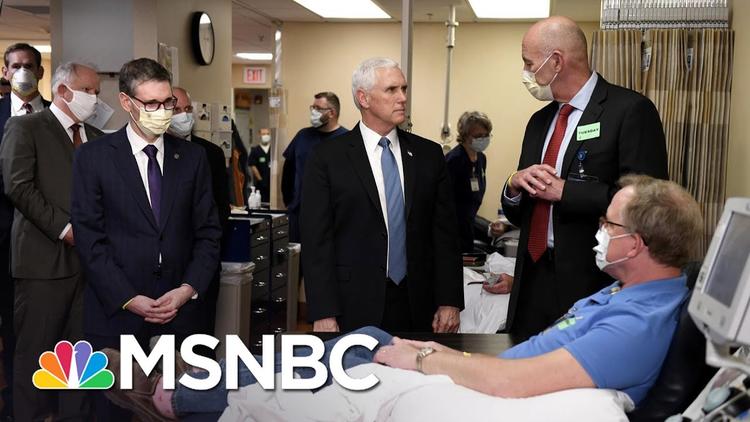 Ann Arbor (Informed Comment) – Jana Winter and Hunter Walker at Yahoo News broke the story that 11 Secret Service agents have tested positive for the coronavirus. Likely some of them served in the West Wing. This week it was revealed at that a US military valet who brought Trump food came down with the virus, sending Trump into a “lava level” rage. Two aides to Vice President Mike Pence have tested positive. Some observers are afraid that the virus is circulating in the West Wing itself.

If so, it would come as no surprise, since the Trump White House has been thumbing its all along nose at best practice mitigating measures.

1. Denialism. Trump spent two months doing absolutely nothing to prepare for fighting the coronavirus, repeatedly denying it would be a problem in the United States, saying there were only 15 cases, that it would fall to zero, that it would magically go away in April. When a scientist at the Centers for Disease Control in late February warned on television of what was coming, the stock market took a dive. Trump had been in India and he fumed all the way home about that public admission. That is, one of Trump’s motives in coronavirus denialism was to protect the value of securities so as to keep his wealthy base happy going into his bid for reelection.

This stance of denialism required that Trump and his circle not be seen to take the coronavirus seriously. But that means that the administration did little to stop the spread of the disease in the White House itself.

In contrast, infectious disease expert Dr. Anthony Fauci strongly urged that the whole custom of shaking hands be abolished forever. In fact, along with wearing masks, South Korea, Japan, Hong Kong and Taiwan, all of whom have unexpectedly low numbers of cases and fatalities, share in common a culture where you greet people in some other way than transferring someone’s microbes from their hand to yours.

3. Refusing to wear a mask. When Pence toured the Mayo Clinic, he had apparently rethought shaking hands, but bumped elbows (also advised against because you have to get in fairly close to do it). But he was, like, the only one not wearing a mask.

Trump wouldn’t even wear a mask when he toured an Arizona Honeywell factory that makes masks, and where all the employees were wearing them. They were playing Paul McCartney and the Wings’ 1973 James Bond theme song, “Live and Let Die” in the background during his visit. I kid you not.

Will Weissert and Jonathan Lemire at AP reported that Trump fears he would look ridiculous in a mask and that the Biden campaign would use footage of him thus attired in attack ads, hurting his reelection chances.

In Hong Kong universal public voluntary adoption of face masks appears to have been one of their secrets of success in containing the coronavirus. Some Americans, in contrast, are so ignorant that they have actually brandished guns rather than wear a mask. (Since they want to be gunmen, why are the so against wearing a mask? Billy the Kid did).

4. Big Meetings. The intrepid Hunter Walker at Yahoo News also reported that big meetings have been held regularly in the White House, including in the relatively cramped Oval Office. Staff routinely meets in large gatherings with no masks and no social distancing.

5. It is almost as though this Republican administration is full of arrogant people who dismiss science. Oh wait.

There was that op-ed Mike Pence wrote denying that smoking tobacco causes lung cancer, and then there was his refusal to provide clean needles during the HIV crisis, harming Indiana public health. Then there is Trump’s own claim that climate change is a Chinese hoax. Gee, there are a lot of Chinese hoaxes around that all seem actually to come true.

Trump’s chief advisor on making America Minderheitenrein (purified of minorities), Stephen Miller, came up through the far right wing Breitbart propaganda mill that denies the science of climate change. Miller’s wife was one of the Pence aides who contracted the coronavirus this week. I wish Ms. Miller a speedy recovery. It is a nasty disease that can leave even young people with serious health conditions, including decreased lung function and damage to the heart, kidneys and other organs.

People who dismiss the prescriptions of science are prospective Darwin Award winners. The danger is that when they own the White House, they may force the rest of us to join them at the podium for the award ceremony.