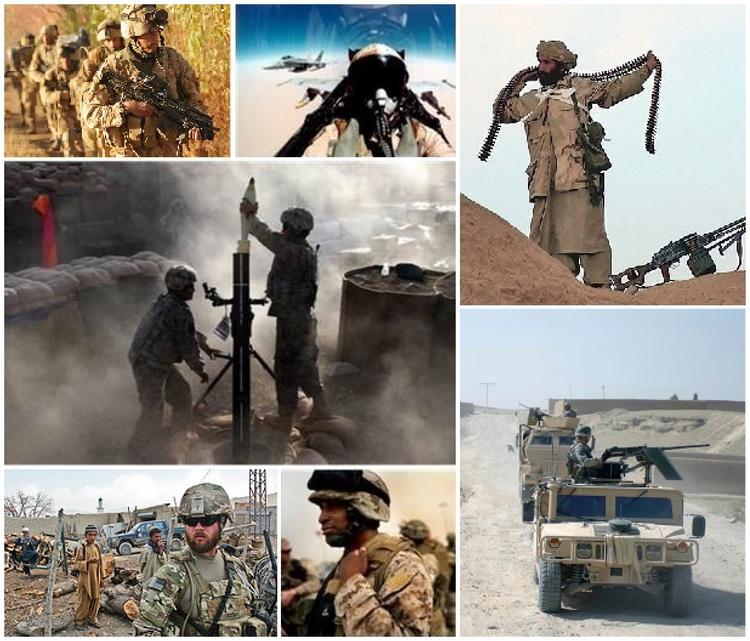 Ann Arbor (Informed Comment) – Wouldn’t it be nice if the richest country in the world had some resources stored up to deal with the worst economic crisis since the Great Depression and the worst health crisis since the 1918 Influenza Pandemic that killed 600,000 Americans? I mean, we had a $21 trillion a year economy.

George W. Bush and his administration squandered $6.4 trillion on the Iraq and Afghanistan wars. With regard to Iraq, that was a war of choice. Iraq had not attacked the United States. Iraq’s secular government feared and hunted down al-Qaeda. Bush just didn’t like the looks of Iraq and decided to whack it.

The US was in a rare moment of global ascendancy. We had won the Cold War. The former Soviet Union was supine. There were no peer rivals in the whole world. The US could have wound down its arms industries, slashed the Pentagon budget, and invested in science and technology and educating the American public in creativity and critical thinking. Late in the Clinton administration we even had a slight budget surplus.

And then Bush pissed it all away. He actually borrowed a lot of the money for his wars, so you and I had to pay interest on their costs. It was sort of like being forced to buy a burned out building and pay interest on the mortgage for the rest of your life. Then he had the bright idea to lift financial regulation, allowing banks and even General Motors (?) to wrap up bad mortgages into securities and sell them like pigs in a poke to unsuspecting investors until that little ponzi scheme collapsed big time.

We was had. The September 11, 2001 attacks on New York and Washington, DC, took a high toll in innocent American lives. But they turn out to have been a flukey success by a small terrorist organization that spent $500,000 on them. Putting in locks on the doors of jetliner cockpits and implementing some basic security measures forestalled further such attacks (it turns out that airliners were all along big bombs heavy with explosive fuel, and they used to be relatively unguarded).

But that was mostly what you needed to do. Improve travel security, and conduct some targeted counter-terrorism operations against the small al-Qaeda terrorist group.

You did not need to make Afghanistan into an American colony and try to change the lifeways of its 37 million people. You did not need to invade and occupy Iraq (pop. 38 million) and try to rule it as though the United States were a sort of steampunk Imperial Britain under PM David Lloyd George. You did not need to have 2.7 million American service members serve 5.4 million military deployments. We did not need to drop an average of 3,500 bombs on Afghanistan yearly since 2006. (Quite apart from the death toll, can you imagine how much those bombs and rockets and missiles cost, each, and how much it cost to deliver them? Who was making money off all that? Not you and me.) You did not need to kill 800,000 people (the angry relatives of whom also started taking potshots at you, requiring you to bomb and kill more people).

A lot of my readers now are too young to remember that during the 2004 Olympics the Bush administration actually took out ads claiming to have liberated 50 million people. They were talking about having invaded and militarily occupied Afghanistan and Iraq. George W. Bush hung out with his viceroy in Iraq, Paul Bremer, at one point in 2003, and Bremer said when they parted, Bush told him, “I’ve got a country to run and so do you.” Nobody thought Bush actually ran anything or was capable of it. As for Bremer, the Iraqis sullenly suffered his presence for about a year before he had to sneak out of the country at night, sort of the way Napoleon Bonaparte absconded from Egypt in the summer of 1799 after it turned out that his invasion hadn’t been a good idea after all.

Bush first said he wanted to attack Iraq because it was close to having a nuclear weapon. This was a damned lie. Iraq did not even have an active nuclear research program, and UN inspectors who had been on the ground there until 1998 so attested.

Then after Bush invaded Iraq and it became clear that the country had no chemical, biological or nuclear weapons or even programs, he started saying he invaded the country to impose democracy. But then he said he did not want one person, one vote elections there, which made you kind of skeptical about that democracy business– along with the fact that he hadn’t ever mentioned liking democracy before. When the press asked him about Gen. Pervez Musharraf’s coup against the elected government of Pakistan, Bush said he approved heartily. Then they asked him Musharraf’s name. But he didn’t know that, he just knew that a general had made a coup in a country full of brown people and that sounded like a capital idea to him.

So you would think that since the Republican Party had brought you two unwinnable wars and an epochal financial collapse that no one would ever vote for it again. But no, the American people looked high and low and found someone even worse at managing affairs than Bush had been (and boy was that hard).

And so now the coronavirus pandemic has hit, and Trump had fired some of the people who would ordinarily have been on the lookout for such a crisis. And in January when a US manufacturer came to him and said he could ramp up to produce millions of needed P95 masks, Trump blew him off.

So our $6.4 trillion is gone up in smoke in Mesopotamia and Central Asia. Did you see any benefit of it? I certainly did not. You do have to admit that it was a kind of genius to succeed in making Americans think those places were somehow important to them. In January 2005 when Iraqis voted and the pro-Iran parties won big, Bush supporters sent me snarky emails decrying my pessimism about the likelihood that Bush would turn that country into a shining beacon on a hill and use it as a fulcrum to reform the whole Middle East. Jonah Goldberg wanted to bet me that in a decade Iraqis would all be very satisfied with the Bush-backed 2005 constitution (which three of the 18 provinces rejected out of hand).

So not only did we waste $6.4 trillion, we continue to waste trillions more on war industries that don’t actually do us any good or make us perceptibly safer.

In fact, the big threat to the United States, both with regard to loss of life and economic harm was lurking in bats or pangolins in East Asia. What you would have needed to be prepared for it was a health and university and scientific research budget instead of a Pentagon budget. The United States has been hollowed out by the war corporations and the fossil fuel corporations and other useless industries that don’t even supply many manufacturing jobs. They’ve made the US government their piggy bank. Meanwhile, 67% of the economy is something called “services” and 42 percent of Americans were making less than $15 an hour even before the calamity struck.

George “Prince Ali” Bush once said he envied the grunts he sent to Afghanistan because of the “romance” of it all. We’ve had quite enough “romantic” adventures abroad, thank you. We want our $6.4 trillion back. And we want steep cuts in war spending. Americans are hurting.