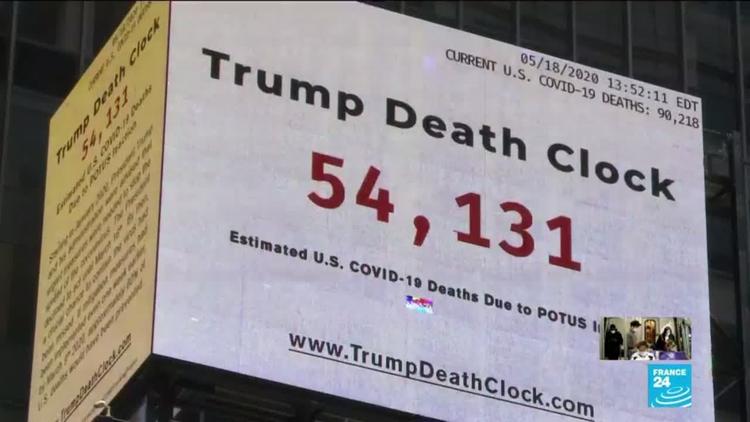 Ann Arbor (Informed Comment) – If Trump were actually a commander-in-chief in the war on Covid-19 instead of playing one on TV, he’d be less like General Dwight D. Eisenhower than like General George Armstrong Custer. Eisenhower defeated the military forces of the Third Reich on May 8, 1945, having already dispatched those of the fascist Italian state. Custer was killed on June 25, 1876 in Montana with all of the five companies he led.

To win a war, you need a strategy, tactics, logistics, intelligence on enemy movements, superior troop strength, and a smart, agile leader with an iron will to achieve victory.

Trump has none of the above.

South Korea demonstrated what a strategy might look like. It would consist of large scale testing and contact tracing. South Korea has had 266 deaths. South Korea is about a 6th as populous as the US, so that is equivalent to 1721 deaths. We have had 58 times that many.

Social distancing in and of itself is not a strategy, it is merely an attempt to keep hospitals from being overwhelmed by Covid-19 patients. It is more of a tactic than a strategy.

Massive testing and contact tracing would require a Federal, nation-wide effort in partnership with state and county health departments.

After “wasting” April, by mid-May the US was testing 300,000 people a day, according to German Lopez at Vox. Most epidemiologists believe we’d need to be doing something closer to a million a day to be effective.

Trump has no national plan to triple testing, much less to increase it by many times over as some scientists propose, according to Robinson Meyer at the Atlantic.

No plan. Now, Eisenhower’s plan was to make a stealth landing on the French coast, establish a beachhead and take France away from the Nazis, then drive on toward Germany itself. The Allied forces needed some practice in making such landings and taking territory from the Axis. So, first, Eisenhower ordered Operation Torch, the landing of troops in Morocco and Algeria so as to take North Africa away from Vichy France. The Allies succeeded, and then drove into Tunisia, from which they mounted the invasion of Italy. These were all practice runs for D-Day.

So if you asked General Eisenhower in 1942, ‘What is your strategy, sir?’ that is what he’d tell you.

If you ask commander-in-chief Trump what his strategy is for fighting the coronavirus, he’d have to say, “I don’t have one.” His main strategy is to lie and say everything is all right when his policies are actually killing your grandmother. If Eisenhower had adopted that strategy in 1942, we’d all be speaking German by now.

Just testing people isn’t enough to prevent further waves of the virus. When a patient is tested and found positive, a contact tracer has to go back and warn the people with whom he’s been in contact to quarantine themselves for a couple of weeks. One recent study found that the contract tracers need to find and test and quarantine about half of the patient’s prior contacts to cut transmission rates by 10%, according to James Temple at MIT Technology Review.

Temple notes estimates that the US needs 100,000 contact tracers to deal effectively with the pandemic.

When the US invaded France the Allied invasion forces amounted to about 4.5 million men. German had 1.6 million. Before 21st century smart weapons, US military doctrine was that you defended your territory with a troop ratio of 1 to 3 but attacked with a ratio of 3 to 1. Eisenhower’s numbers were exactly right.

Custer had about 700 cavalrymen and scouts, facing on the order of 2000 warriors of the Dakota, Lakota, Northern Cheyenne and Arapaho. He invaded 1 to 3, which is the opposite of the correct ratio.

With 11,000 contact tracers this spring, Trump was doing the equivalent invading with a ratio of 1 to 9, which makes him far less well prepared than Custer. Trump himself is not doing anything about contact tracing (what with not having a strategy and all). It is the states that are swinging into action. And their present, ambitious plans will only take us to 2/3s of what is needed.

It would be as though Eisenhower had said, look, guys, the Nazis are not the problem of the Federal government. Me, I’ve going off to play golf. The governors of the states can call up their national guards and send them to Europe if they like. And then the governors managed to gather up only 3 million poorly trained and equipped troops and send them into the maw of the crack German divisions at only a 2 to 1 ration. Iffy. Very iffy.

Then we have the tactic of mask wearing, which Hong Kong showed amazingly effective.

And as for Trump refusing to wear a mask and implicitly encouraging people not to do so, that would be like sending the troops into battle with no helmets. Steel helmets and other equipment improvements increased the survival rate for wounded and ill troops to 50% during World War II; it had been only 4% during World War I.

Masks are even better than helmets. If 80% of the public wore masks, coronavirus transmission could be stopped. Jeremy Howard notes that “Another recent study showed that unfitted surgical masks were 100% effective in blocking seasonal coronavirus in droplets ejected during breathing.” So you don’t need a fancy N95 mask for this to work.

The virus is not mostly spread by touching surfaces. It is mostly spread though droplets coming out of the mouth of an infected person. If such a person sneezes, it comes out at 200 miles an hour. Even just talking loudly spews it out. That doesn’t happen if the person wears a mask. Masks are much more effective in stopping infections than had been though a few months ago. It is the only way to explain how densely populated Hong Kong only has 4 deaths from Covid-19. People just voluntarily universally wore surgical masks there, even without a strong government policy.

So this is like Eisenhower saying, look, guys, helmets are for pansies and I ain’t wearing one and if you’re a real man you’ll suck up and just take the damn Nazi shrapnel to the brain.

Trump has actually impeded the logistics of fighting the virus by trying to grab up scarce personal protection equipment and by failing to provide an effective test in February when one needed to be rolled out.

It would be as though Eisenhower not only made the state national guards fight alone in Europe without the national army, but swooped in and stole their rifles, tanks and helmets for the Federal army so as to give them back out to the governors he liked.

The only correct logistical step he has taken is to back the quick development and delivery of a vaccine, a task with which he charged Dr. Moncef Slaoui. But it isn’t clear exactly what resources Trump is putting into that effort.

With regard to intelligence, Alan Turing broke the Nazi “Enigma” code.

Since we aren’t doing enough testing we don’t really know where we are winning or losing. Georgia certainly opened too soon and will certainly get a second wave (just as Arkansas is now getting), but its numbers looked earlier this month like they were going down. They weren’t. Georgia’s health officials just mixed together findings for who was sick with the virus and who had been exposed to it, creating a statistical optical illusion. (This may not have been deliberate). A Florida state health worker says she was fired because she wouldn’t phony up the coronavirus numbers the way Governor Rick DeSantis wanted her to. This is plausible.

Those statistics CNN shows you of over 1.5 million cases and nearly 100,000 dead are breathtakingly high for a hi-tech society like the US, and galactically worse than those for South Korea or even Germany. But the statistics are certainly vast underestimates. With no national testing program or efficient data collection and aggregation, a lot of cases are slipping through the cracks, and a lot of old people are dying at home in their beds and not being counted. Figures close to Trump have allegedly pressured the CDC to attribute deaths to other causes where the patient had had more than more disease alongside Covid-19.

So we don’t have an Alan Turing to break the enemy encryption so as to know his troop movements. We don’t even have a sure grasp of our own casualties.

Folks, on Memorial Day weekend as we face an insidious foe that will almost certainly kill 200,000 of us at least, we find ourselves at the Little Big Horn, not at Normandy.

And we are not being commanded by a supple military genius like Dwight D. Eisenhower but by a clueless George Custer.

Informed Comment deeply regrets the deaths of 100,000 Americans, every one a precious life. We above all regret the unnecessary deaths, preventable by savvy leadership and well-executed strategy and tactics.