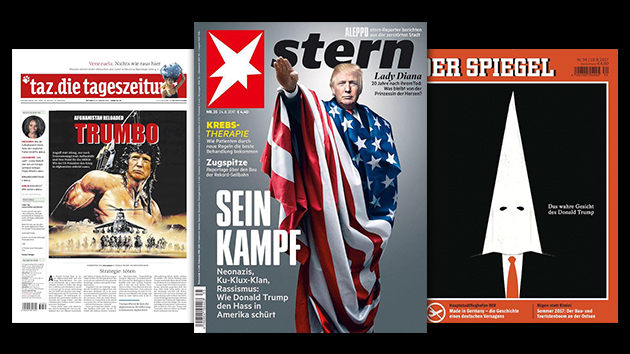 Hamilton, Ont. (Special to Informed Comment) – George Floyd has ignited an “Arab Spring” in the United States. Like the now-fallen dictators of Egypt and Tunisia, the current American regime demonstrates that it does not serve the people. It consumes them. Trump’s America is a failed state. That’s why other countries rally in support; they know a democratic uprising when they see one. This is the basic reality voiced by the protestors; Black Lives Matter is a demand for basic human rights, a demand for just governance. BLM is the change we need, because George Floyd is the American reality.

The protests illustrate the fundamental nature of politics—health and rights are inseparably tied together. A government that does not allow its citizens to survive, to eat, to breathe, to live, is illegitimate. The U.S. is having an Arab Spring, perhaps an “American Spring.” George Floyd, like Khalid Said (Egypt) or Hamza Al Khatib (Syria), was an outrageous public killing by police that showed ordinary citizens the bankruptcy of the state and their own dim futures. Structural racism allowed a comfortable majority to look away while African Americans were sacrificed, but now with 100,000+ dead, high unemployment, a staggering economy, and soon to come, overwhelm of health infrastructure, there is no looking away. The Trump regime threatens the physical survival of African American citizens and all citizens. Trump has been clear about his intentions from the beginning–to dismantle the republic with the aid of his white alt-right allies. Recent history shows what Trump offers, and what the American future could be.

George Floyd is America—Why Protestors Are In the Street

Why are people in the street? Protestors tell the NYT, “George Floyd was the last straw.” (Michael Sampson II), “It could be my father, my brother, my uncle, my cousin, my friend.” (Victoria Sloan). “If you’re not standing up for George Floyd, who’s going to stand up for you?” (Beth Muffett). In Egypt, Syria and Tunisia, national uprising also centered on an innocent whose brutal death demonstrated the oppression and suffering in society. What happened in these countries in 2011 can provide a glimpse of possible futures for the U.S.

In Tunisia, Mohamed Bouazizi lit himself on fire (December 14, 2010) and the Arab Spring began, as his fellow citizens saw themselves in his suffering—I also cannot eat, work, have shelter, or raise a family in my country. Beaten by police when he tried to create a fruit stand, Bouazizi burned himself to protest a regime that makes citizens’ survival impossible. In Egypt, police beat the young Khalid Said to death in broad daylight. In Syria, 13 year-old Hamza al-Khatib was detained by police when he demonstrated with junior high classmates. He was tortured, his penis hacked off, shot several times in the chest, and his corpse was released to his parents (May 2011). Egyptians and Syrians chanted, “We are all Hamza al-Khatib.” “We are all Khalid Said.” and marched for regime change. What does it mean to be murdered by police? The police are not accountable to the people. It means human life is not valued in this system. Can such a government be legitimate? By what right? Like Khalid Said and Hamza al-Khatib, Americans now march for George Floyd, and like the Arab Spring, electoral posters will soon bear his image reminding us to vote.

African Americans have long lived the world of George Floyd and Mohamed Bouazizi while white America turned away. But none are free in a country where police can kill fellow citizens with impunity. The festering wound of structural racism has rotted the foundations of the house, and Trump is the end of the line. One can say this is the logical conclusion of America, a state founded on slavery. But the Constitution promises a different vision. The Black Lives Matter movement is the fight for the true republic itself.

The US can now turn left or right, realize the promise of the constitution or disintegrate from internal contradiction. There aren’t sidelines. The Arab Spring offers a few endings, and two seem most analogous. We can be Syria, or we can be Tunisia.

Hitler and his brownshirts didn’t have 4-Chan to plan their “Boogaloo” (race war), but their American children, Trump and his alt-right “accelerationists” (don’t forget Steve Bannon training “gladiators” in Italy) are clear about drawing tactics and goals from their fascist forbearers. Like Mussolini and French fascists from Georges Sorel (1847-1922) to Renaud Camus, the alt-right is goading its followers to “accelerate” violent revolution and race war to destroy government and “purify” white civilization. A Minneapolis alt-right protestor casually smashed windows; “Proud Boy” Wesley Somers set fire to the Tennessee courthouse, Trump blows the dog-whistle for his alt-right paramilitaries, who hear even from Russia. Commentator John Buell at Informed Comment asks if “Trump sees in COVID-19 his Reichstag moment?” Der Stern depicted Trump’s “Sein Kampf.” The parallels write themselves: Hitler campaigned to replace republic with white nationalism, denounced the press, and had the German parliament (Reichstag) set fire, a chance to blame the Left, use crisis to suspend constitutional civil liberties, claim extraordinary powers, censor the press, impose martial law, and encourage civil violence. He even hid in a bunker.

Now as Trump puts together his mail-order dictator kit, Bashar al-Assad in Syria lights his way (another pal of Vladimir Putin). What does Trump need to stay in power? A faceless secret police and spy apparatus, arbitrary detention, military force against civilians, police violence as a terror tactic, hamstrung elections, a corrupt judicial authority, and a nation based on race ideology.

Assad has it all, and if we follow, we can expect Syrian outcomes. Even if you’re ready to join up with Mitch McConnell for Trump’s Christian, white-supremacist “Fox Nation,” civil war will be a constant. Civilian killing will be a constant. Only violence can keep a minority in power over a resistant majority.

Black Lives Matter—Tunisia and the Future of the American Republic

The Tunisian revolution was also live-tweeted, filmed, and facebooked, the swollen, bruised faces of DC protestors could be Tunis in 2011. Tunisia was bedeviled by its own Islamic version of “accelerationists,” but despite assassinated politicians they nevertheless persisted and stayed the democratic process. Tunisia’s opposing parties came together to draft a new constitution (2014) with greater protection for human rights. The crisis of COVID-19 has accelerated the disintegration of American democracy, and we have one opportunity in November for an orderly transfer of power to preserve social order, peace, and public welfare. Let’s be like Tunisia, and recognize ourselves in George Floyd, whose death is a crime against all citizens. Tunisia brought reconciliation by addressing historic injustice. America has a long way to go to address structural racism, but we can begin by listening to the voices of African Americans to guide the nation to reform. And vote. Ninety percent of Tunisians voted in 2011, the first historic free election. Could Americans reach 91% in November?

The United States can go beyond the Arab Spring and open a new chapter in history by addressing structural racism. Only when black lives matter can we be free. As Al Sharpton said, “Make America Great? Great for who and great when? We’re going to make America great for everybody for the first time.”

Ellen Amster is an Associate Professor in the Department of Family Medicine and in the Department of Religious Studies and is Jason A. Hannah Chair in the History of Medicine at McMaster University. Her publications include “The Body and the Body Politic: Medicine, Public Health, and Healing as History in the Modern Middle East and North Africa,” International Journal of Middle East Studies (47:3): 563-565 and her book, Medicine and the Saints: Science, Islam, and the Colonial Encounter in Morocco, 1877-1956 (Austin, Tx., 2014).