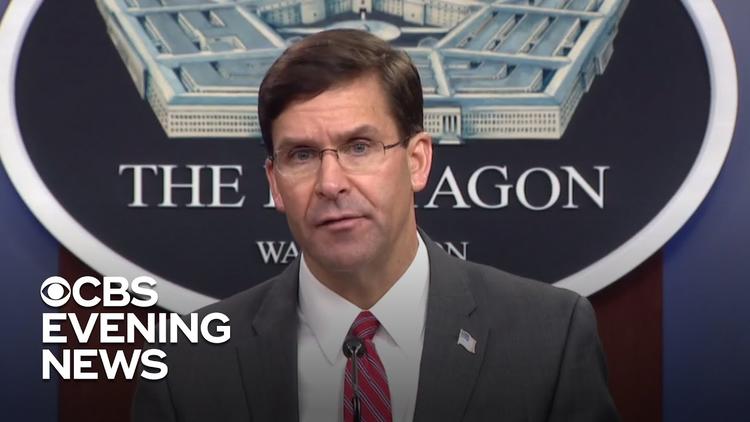 Ann Arbor (Informed Comment) – Maybe Mark Esper isn’t having fun anymore as Secretary of Defense. On Wednesday he appeared to be trying to commit political suicide by president, as he openly rejected the idea of invoking the 1807 Insurrection Act to send US troops into states over the objection of their governors, broached by his boss, Donald J. Trump.

“I say this not only as secretary of defence, but also as a former soldier, and a former member of the national guard, the option to use active-duty forces in a law enforcement role should only be used as a matter of last resort, and only in the most urgent and dire of situations. We are not in one of those situations now. I do not support invoking the Insurrection Act.”

Well, you can’t accuse him of pussyfooting around the issue. There were immediate leaks from White House staff to reporters that Trump is absolutely furious with Esper. You wonder if the leaks were Trump himself, doing his “John” voice from his 90s phony press plants. His spokesperson said that Esper is still secretary of defense “for now.”

Pressed on why in the world he was walking with Trump through an abandoned Lafayette Park from which peaceful demonstrators had been unconstitutionally and forcibly expelled, accompanying the Orange One in his bizarre march on an Episcopal church from which clergy had been expelled, Esper seemed at least a little bit contrite:

Esper also tried to explain away the use of a military medevac helicopter to buzz demonstrators (which is an extremely dangerous maneuver to use on civilians). Julian Borger at The Guardian said that he suggested that the helicopter was checking if there were protesters at a checkpoint, which of course makes no sense.

He insisted that the US military would “stay apolitical in these turbulent days.”

Borger says that Esper backed off a bit from his use of the term “battlespace” for American citizens, explaining that it is “part of our military lexicon” and that “It’s what we routinely use to describe a bounded area of operations. It’s not a phrase focused on people, and certainly not on our fellow Americans.” He ended with a slight retraction: “In retrospect I would use different wording, so as not to distract from the more important matters at hand.”

Yes, I’m not sure who Esper thinks is in that battlespace area of urban operations if not his fellow Americans. Informed Comment took him to task for this terminology.

Esper’s desperate act of mild defiance of the president seems to have been something of a palliative to a few Republican lawmakers, who have for three and a half years suffered from severe moral lordosis (a condition in which the spine bends too far backwards).

The Hill quoted Senate Majority Whip John Thune (R-S.D.), “I think that these tasks ought to be relegated as much as possible to the state and local authorities, the law enforcement and police,” But the Hill was only able to find three or four such GOP voices, and one of them was the already-disgraced Mitt Romney.

At least Esper took a baby step toward moral adulthood by standing up to Trump while still in office.

Former SecDef Jim Mattis missed his own Rubicon by two years, condemning Trump as a danger to the constitution. If he had said that when still in office, it might have tipped the scales on the impeachment of Trump. If you miss crossing the Rubicon by two years, then the civil war is over. No one cares. It is sort of like two-year-old fish and chips. They don’t even stink any more, they’re just kind of brittle and uninteresting.

I doubt if all this sound and fury will amount to anything. Trump does as he wants, and if Esper gets in the way he can join Mattis in the ineffectual pages of The Atlantic. The congressional Republicans will go along with the president. They still think he’s their life raft, not realizing he is their Captain Edward Smith, the helmsman of The Titanic.