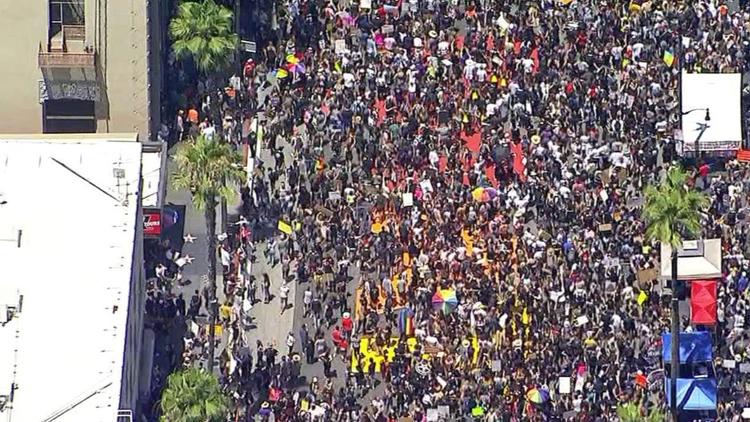 ( Tomdispatch.com) – They were relegated to the protest equivalent of a ghetto. Their assigned route shunted them to the far fringes of the city. Their demonstration was destined for an ignominious demise far from any main thoroughfare, out of sight of most apartment buildings, out of earshot of most homes, best viewed from a dinghy bobbing in the Hudson River.

Those at the head of the march had other ideas. After a brief stop at city hall, they turned the crowd onto the main drag, Washington Street, and for the next few hours, a parade of protesters snaked through Hoboken, New Jersey.

“Whose streets? Our streets!” is a well-worn activist chant, but for a little while it was true as Hoboken’s motorcycle cops played catch-up and the march turned this way and that — first, uptown on Washington, where a conspicuous minority of businesses were boarded up, expecting trouble that never came. Then, a left onto Sixth, another onto Jackson. Monroe. Park. Finally, back to Washington and onward.

All the while, the voices of the mostly white marchers, being led in call-and-response chants mainly by people of color, rang through the streets and echoed off high-rent low rises.

As an ever-more middle-aged white guy who, a decade ago, traded covering U.S. protests for reporting from African war zones, I have little of substance to add to the superlative coverage of the Black Lives Matter demonstrations that have erupted across the country in the wake of the police killing of George Floyd. For that, read some of the journalists who are on the front lines innovating and elevating the craft, like the great Aviva Stahl’s real-time eyewitness observations, incisive interviews, and on-the-fly fact-checking, while marching for miles and miles through the streets of Brooklyn, New York.

Instead, bear with me while I ruminate about something I said to Tom Engelhardt, the editor of this website, TomDispatch, at the beginning of March when our lives changed forever. Instead of simply bemoaning the onslaught of the Covid-19 pandemic — however devastating and deadly it might prove to be — I uncharacteristically looked on the bright side, suggesting that this could be one of those rare transformative moments that shifts the world’s axis and leads to revolutionary change.

I bring this up not to brag about my prescience, but to point out the very opposite — how little foresight I actually had. It’s desperately difficult for any of us to predict the future and yet, thanks so often to the long, hard, and sometimes remarkably dangerous work of organizers and activists, even the most seemingly immutable things can change over time and under the right conditions.

Despite my comments to Tom, if you had told me that, in the span of a few months, a novel coronavirus that dates back only to last year and systemic American racism that dates back to 1619 would somehow intersect, I wouldn’t have believed it. If you had told me that a man named George Floyd would survive Covid-19 only to be murdered by the police and that his brutal death would spark a worldwide movement, leading the council members of a major American city to announce their intent to defund the police and Europeans halfway across the planet to deface monuments to a murderous nineteenth-century monarch who slaughtered Africans, I would have dismissed you. But history works in mysterious ways.

Four hundred years of racism, systemic abuse of authority, unpunished police misconduct, white skin privilege, and a host of other evils at the dark core of America gave a white Minneapolis police officer the license to press a black man’s face to the pavement and jam a knee into his neck for nearly nine minutes. For allegedly attempting to buy a pack of cigarettes with a phony $20 bill, George Floyd was killed at the intersection of 38th Street and Chicago Avenue in Minneapolis, Minnesota, by police officer Derek Chauvin.

At the beginning of the last century, whites could murder a black man, woman, or child in this country as part of a public celebration, memorialize it on postcards, and mail them to friends. Between 1877 and 1950, nearly 4,000 blacks were lynched in the American South, more than a death a week for 73 years. But the murders of blacks, whether at the hands of their owners in the seventeenth, eighteenth, and nineteenth centuries or of unaccountable fellow Americans in the latter nineteenth and twentieth centuries never ended despite changes in some attitudes, significant federal legislation, and the notable successes of the protests, marches, and activism of the Civil Rights Movement of the 1960s.

From 2006 to 2012, in fact, a white police officer killed a black person in America almost twice a week, according to FBI statistics. And less than a month before we watched the last moments of George Floyd’s life, we witnessed a modern-day version of a lynching when Ahmaud Arbery, a 25-year-old black man, was gunned down while jogging on a suburban street in Glynn County, Georgia. Gregory McMichael, a 64-year-old white retired district attorney, investigator, and police detective, and his son Travis, 34, were eventually arrested and charged with his murder.

Without the Covid-19 pandemic and the Trump administration’s botched response to it, without black Americans dying of the disease at three times the rate of whites, without the suddenly spotlighted health disparities that have always consigned people of color to die at elevated rates, without a confluence of so many horrors that the black community in America has suffered for so long coupled with those of a new virus, would we be in the place we’re in today?

If President Trump hadn’t cheered on the efforts of mostly older white protesters to end pandemic shutdowns and “liberate” their states and then echoed a racist Miami police chief of the 1960s who promised “when the looting starts, the shooting starts,” essentially calling for young black protesters to be gunned down, would the present movement have taken off in such a way? And would these protests have been as powerful if people who had avoided outside contact for weeks hadn’t suddenly decided to risk their own lives and those of others around them because this murder was too brazen, too likely to end in injustice for private handwringing and public hashtags?

In Minneapolis, where George Floyd drew his last embattled breath, a veto-proof majority of the city council recently announced their commitment to disbanding the city’s police department. As council president Lisa Bender put it:

“We’re here because we hear you. We are here today because George Floyd was killed by the Minneapolis police. We are here because here in Minneapolis and in cities across the United States it is clear that our existing system of policing and public safety is not keeping our communities safe. Our efforts at incremental reform have failed. Period.”

A month ago, such a statement by almost any council chief in any American city — much less similar sentiments voiced across the nation — would have been essentially unthinkable. Only small numbers of activists working away with tiny chisels on a mountain of official intransigence could even have imagined such a thing and they would have been dismissed by the punditocracy as delusional.

But the reverberations of George Floyd’s death have hardly been confined to the city where he was slain or even the country whose systemic bigotry put a target on his back for 46 years. His death and America’s rampant racism have led to soul-searching across the globe, sparking protests against discrimination and police brutality from Australia to Germany, Argentina to Kenya. In Ghent, Belgium, a bust honoring King Leopold II was defaced and covered with a hood bearing Floyd’s dying plea: “I can’t breathe.” In Antwerp, Leopold’s statue was set on fire and later removed.

It was Leopold, as TomDispatch regular Adam Hochschild so memorably documented in King Leopold’s Ghost, who, in the late nineteenth century, seized the vast territory surrounding Africa’s Congo River, looted its rubber, brutalized its people, and presided over a fin de siècle holocaust that took the lives of as many as 10 million people, roughly half the Congo’s population. Belgian activists are now calling for all the country’s statues and monuments to the murderous monarch to be torn down.

A Cultural Renaissance or a Societal Black Death?

Like the island off its coast, Hoboken was born of a great swindle. In 1658, the Dutch governor of Manhattan reportedly bought the tract of land that now includes that mile-square New Jersey city from the Lenape people for some wampum, cloth, kettles, blankets, six guns and — fittingly enough, given Hoboken’s startling bars-to-area ratio — half a barrel of beer.

In other words, the city where I covered that demonstration is part and parcel of the settler colonialism, slavery, and racism that forms the bedrock of this nation. But even in that white enclave, that bastion of twenty-first-century gentrification, in the midst of a lethal global pandemic with no cure, 10,000 people flooded its parks and streets, carrying signs like “Racism is a pandemic, too” and “Covid is not the only killer” that would have made little sense six months ago.

There were also posters that would have been shocking in Hoboken only several weeks ago, but didn’t cause anyone to bat an eye like “ACAB” (an acronym for “All Cops are Bastards”) or “Are you a:

Not to mention dozens and dozens of signs reading “Defund the Police” or “Abolish the Police.” Suddenly — to most of us, at least — such proposals were on the table.

In reality, social change rarely occurs by accident or chance. It usually comes in the wake of years of relentless, thankless, grinding activism. It also takes a willingness to head for the barricades when history has illuminated the dangers of doing so. It requires persistence in the face of weariness and distraction, and courage in the face of abject adversity.

Where this movement goes, how it changes this nation, and what it spawns around the world will be won or lost on the streets of our tomorrows. Will it mean an America that inches closer to long-articulated but never remotely approached ideals, or usher in a backlash that leads to a wave of politicians in the Trumpian mold? In moments like this, there’s no way of knowing whether you’re on the cusp of a cultural Renaissance or a societal Black Death.

It takes a long time, but the Earth’s orbit and axis do change and once they do, things are never the same again. Already, from Minneapolis to Antwerp to modest Hoboken, this world is not what it was just a short while ago. A man forced to die with his face pressed to the ground may yet shift the earth under your feet.

Nick Turse is the managing editor of TomDispatch and a fellow at the Type Media Center. He is the author most recently of Next Time They’ll Come to Count the Dead: War and Survival in South Sudan and of the bestselling Kill Anything That Moves.