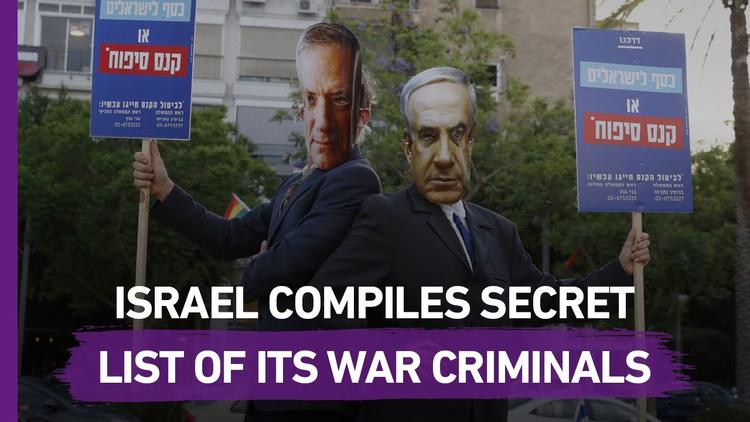 ( Middle East Monitor) – The International Criminal Court (ICC) has adjourned without issuing its ruling on whether Israeli officials will be tried for war crimes against the Palestinian people since 2014, when Gaza was destroyed during “Operation Protective Edge”. With an extended timeframe until the ruling is due, Israel now has additional time to prepare for any eventual action taken by The Hague. It has apparently already drawn up a list of officials who might be liable to be prosecuted for war crimes.

According to Haaretz, the list contains the names of 200-300 Israeli officials, most probably including Prime Minister Benjamin Netanyahu and Defence Minister Benny Gantz. The list has been drawn up in utmost secrecy, not least because, as Haaretz points out, “The court is likely to view a list of names as an official Israeli admission of these officials’ involvement in the incidents under investigation.” The existence of the list alone is likely to be viewed as such.

However, what needs to change at an international level is the endorsement of Israel’s security narrative. The ICC’s clear mention of war crimes, as opposed to alleged war crimes – the latter being a phrase which many human rights organisations have used and through which Israeli impunity has also been cultivated – should prompt a new reckoning of Israel’s standing and its state violence.

During that 2014 military offensive against the Palestinians in Gaza, the international community was quick to promote “Israel’s right to defend itself” even as Palestinian civilians were being slaughtered. So far, the UN has never considered Palestinians as anything other than a statistical detail supporting its purported humanitarian endeavours.

The fact of the matter is that Israel is a colonial entity, but this has been eliminated from international diplomatic discourse, to the detriment of the Palestinian people. Hence the discrepancies when speaking of Israel’s perpetual violations against the Palestinians; by refusing to include the colonial-settler context, the international community eliminates the foundations of what have now been described clearly as war crimes by the ICC.

The list itself suggests guilt, admitted more or less openly by the very fact of its compilation. While the criminal investigations are down to the competence of the ICC, it rests with the international community to see them through to their conclusion, rather than simply parroting Israel’s excuses for its violence. The planned annexation of the occupied West Bank is a case in point. Israeli officials are concerned that implementing the annexation plans will be detrimental to Israel, especially given that settlement expansion is being considered as the strongest evidence of war crimes. The international community, however, has still failed to unite against the possibility of additional war crimes being committed against the Palestinian people, and limited its response to repeated statements that annexation is against international law.

Israel has never, ever, heeded such statements. The possibility of ICC investigations, however, is exposing the fact that Israel knows it has committed war crimes and is preparing to shield the perpetrators from international prosecution. If the UN is truly concerned with safeguarding human rights, it should seize the opportunity to refrain from further endorsement and dissemination of Israel’s security and “self-defence” narrative, which itself violates international law. It should adopt a strong stance against Israel and its annexation plan, and stand by the ICC’s clear admission that colonial expansion is a war crime. The UN, however, cannot do so without taking into account its own complicity in maintaining Israel’s colonial violence, hence the absence of a consistent human rights narrative which would support a possible criminal investigation at an international level.