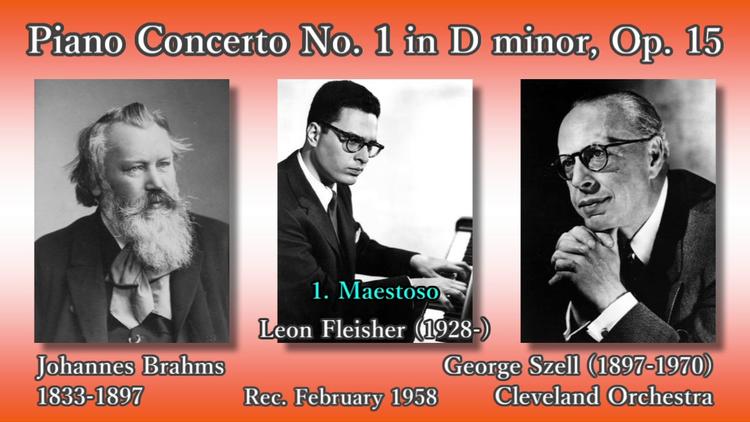 It was a sad day for the music world when we heard that concert pianist, conductor, and teacher par excellence Leon Fleisher died on August 2 at the age of 92.

But it’s also an opportunity to celebrate the legacy of a great musician who was an inspiration to countless music lovers and anyone struggling to overcome adversity.

In his early career, Fleisher was an internationally-renowned pianist who made landmark recordings with acclaimed conductors. But when in his 30s he suffered a severe disability — loss of his ability to play with the right hand — he coped with this adversity by reinventing his career, and inspiring many others along the way.

I first heard Leon Fleisher perform live when he played a piece for the left-hand only—the Prokofiev Piano Concerto No. 4. It was a reminder that a disability need not preclude you from doing the things you love. You just have to work harder and be more creative.

Born in 1928 to Jewish immigrants from Odessa and Chelm, Fleisher began playing piano at 4, studied with the legendary Austrian-American pianist Artur Schnabel, and debuted with the New York Philharmonic at age 16.

After winning the prestigious Queen Elizabeth of Belgium competition, his reputation grew to international fame.

But when he was 36, at the height of his concert pianist career, he started suffering symptoms of a debilitating condition of his right hand: His fifth and fourth fingers would cramp and curl under.

He tried every possible therapy to find a cure for this mysterious malady. One doctor tried shock treatment; another put his hand in traction for 6 weeks. Some told him it was in his head, so he sought psychological help. But all his efforts at finding a cure were to no avail.

After more than 30 years of amazing success with the piano, Fleisher found he could no longer play the music that was such a part of his soul.

“It was hard to find words for the dark cloud that hovered over me: of anguish, of dejection, of rage. I fell into a deep depression . . . [but] I was stuck with my love of music. Something about it was still sustaining, and still worthwhile,” he wrote in his 2010 memoir, My Nine Lives.

And so, Fleisher reinvented his career.

First, there was the repertoire for left-hand only. Several famous compositions for the left-hand, such as the Prokofiev piece and the Ravel Piano Concerto, became his trademark.

Yet, there is no denying that high-level showpieces for piano left-hand and orchestra are few and far between. Compared to what he had played before, it was a huge disappointment.

But it was mainly teaching where he found his calling. Fleisher threw himself into teaching at Peabody Institute, Johns Hopkins University’s school of music. His master classes (check out this one with Yo-Yo Ma) and lectures produced hundreds of talented musicians, and some of our generation’s leading pianists, including Andre Watts, Yefim Bronfman and Jonathan Biss.

In the mid-1990s, after he had tried “everything from acupuncture to Zen Buddhism,” Fleisher found a partial cure to the malady that afflicted him, focal dystonia, a neurological condition caused by repetitive tasks which causes contraction or spasm of the muscles.

A combination of Botox injections and Rolfing, a deep massage therapy, enabled him to resume playing with two hands. But he still had to pick his repertoire carefully, because he wasn’t completely cured.

When he celebrated his 90th birthday, Fleisher marked the occasion by giving a series of two-handed concerts with the Baltimore Symphony Orchestra.

I attended one of those performances. As he played Mozart’s Piano Concerto No. 12, and the “elder-statesman” musician made the piano sing the Mozart melodies, you could hear—in between the notes—his message of finding hope and overcoming adversity.

His musical and academic achievements notwithstanding, Leon was known as an approachable, down-to-earth guy with a wry sense of humor.

Once, when serving as a judge in the International Rubinstein Piano Competition in Tel Aviv, one of the contestants played a Prokofiev Toccata faster and louder than anyone else. Fleisher turned to a fellow judge, and remarked: “Why does he hate his mother?” Fleisher believed in playing music to move people, not for showing off flashy virtuosity.

On being married three times, he said that while Opus 1 and Opus 2 didn’t work out so well, Katherine Jacobson—or Kathy—was his Eroica. “Eroica” is the epithet of Beethoven’s Third Symphony. “It means ‘heroic.’ It seemed to suit her very well,” Fleisher wrote. They were married for 38 years.

Leon believed in making classical music accessible to all. Following his marriage to Kathy, the couple organized concerts for youth in the “rough neighborhoods” of West Baltimore, and invited kids from the program to their Thanksgiving dinners. They set up the Fleisher-Jacobson International Children’s Education Foundation, which helps kids with schooling and other needs.

It’s unusual for classical music artists to wade into politics, but Fleisher didn’t shy away from standing up for what’s right and promoting human rights. When in 2007 he was going to be awarded the prestigious Kennedy Center Honors, he found himself in an inner struggle whether to accept the honor, because the event is traditionally attended by the President.

In an open letter in the Washington Post, “My White House Dilemma,” he protested the Bush White House’s policies regarding the Iraq War, the torture of prisoners, and other decisions that he said amounted to a “systematic shredding of our nation’s Constitution [that] have left us weak and shamed at home and in the world.” He ended up attending the event wearing a peace symbol and a purple ribbon.

Leon wrote: “The purpose of music is to communicate from the heart to the heart. Beethoven’s vision of music as a force capable of reconciling us to each other and to the world may today seem remote, but that renders it an ever more crucial ideal for which to strive.”

May the legacy of Leon Fleisher continue to inspire and help us achieve that goal.