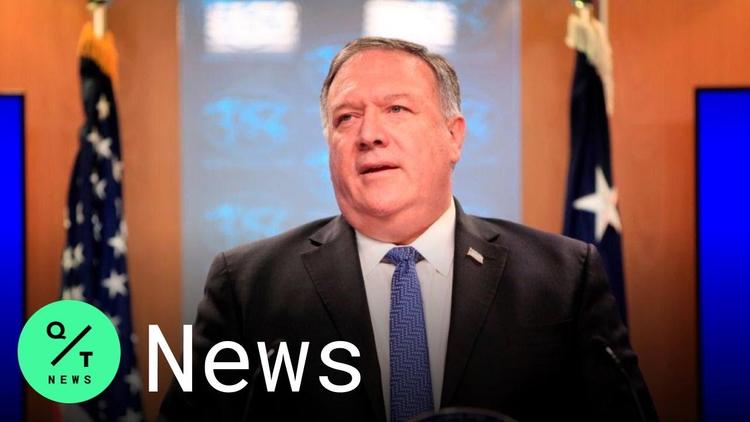 Ann Arbor (Informed Comment) – Peter Hutchison at AFP reports that the Trump administration may be set to shoot itself in the foot at the United Nations Security Council (UNSC) next week by pressing for an over-ambitious resolution against lifting the arms embargo on Iran.

The 2015 Joint Comprehensive Plan of Action signed by the US and the other permanent members of the UNSC plus Germany involved a set of bargains. Iran had to give up 80 percent of its civilian nuclear energy program and accept constraints that made it impossible ever to weaponize the program. According to consistent CIA and IAEA reports, Iran did not have a nuclear weapons program, contrary to the lies of people like John Bolton.

One thing Iran was to get out of the deal was that on October 18, 2020, the ban on arms sales to Iran would lapse.

The US, Israel and Saudi Arabia are desperate that Iran not be allowed to purchase weapons freely, and want to find some way to make the UNSC extend the embargo.

Secretary of State Mike Pompeo had the bright idea to maintain that the US, which pulled out of the treaty, is still a “participant” in the 2015 nuclear deal. The JCPOA has a clause whereby if Iran does not meet its obligations, any signatory can initiate a “snap back” procedure revoking Iran’s gains. Since the US reneged on the deal and has orchestrated a financial and trade blockade on Iran, Iran has ceased complying 100% with the treaty stipulations, though frankly its departures have been minor and intended to pressure Europe to buck the US blockade.

Pompeo, having pushed Iran out of the treaty, now wants to invoke snap back provisions to stop the lifting of the UN arms embargo on Iran. His resolution actually goes way beyond snap back and is harsher than the earlier UNSC provisions. He also complained about Iranian aid to the Houthi rebels in Yemen, where Saudi Arabia, backed by the US, is bombing the country back to the stone age. The 2015 nuclear deal was narrowly focused on Iran’s enrichment program and has nothing in it about Yemen, so Pompeo’s draft is not even coherent.

Those countries that want to see the 2015 JCPOA survive and be brought back to health are afraid that Pompeo’s draft, if passed, would cause Iran to withdraw from the treaty entirely. Except for Russia, they are all hoping that Biden will win in November and that the nuclear deal can be reinstituted.

The five permanent members include France, Britain, China and Russia. China and Russia both want to sell weapons to Iran and do not approve of the Trump Administration trying to deep-six the treaty, and if push comes to shove they will veto the US draft.

Permenent members France and Britain and non-permanent members Germany and Belgium want to keep the JCPOA alive and so will vote against the maximalist Trump language. Those four might have been persuaded to do a two-year extension of the arms embargo, in accordance with European Union policy, but Pompeo and other Trump officials were not willing to compromise.

As for the rest of the non-permanent members, Trump is unlucky in them. The US maintained an arms embargo on Viet Nam for decades after the US war there was lost, and Obama finally lifted it. Viet Nam says that it fully supports the 2015 nuclear deal and would like to see the parties work out their differences to keep it in place. Hell will freeze over before Viet Nam votes against Iran on behalf of the US.

Indonesia is the world’s most populous Muslim country and is seeking stronger bilateral diplomatic and economic ties with Iran. At the UN in June,

“Indonesia called on all parties to remain engaged and to complete fully, effectively and in good faith their obligations under the Joint Global Action Plan and resolution 2231 (2015), which are of crucial importance. In this regard, Indonesia expressed concern about the United States’ decision to withdraw from the Action Plan and to reimpose sanctions. Efforts should be made to create an enabling environment for the implementation of the Action Plan.”

I don’t think Jakarta will vote with Trump.

Niger is a Central African country with a population of 22 million that is 99.3% Muslim and has its own uranium industry. According to a recent UN press release, the position of Niamey is that

“Niger has called the Islamic Republic of Iran to respect its obligations, including submitting to the International Agency for control measures for Atomic Energy (IAEA) so as to eliminate any risk of proliferation. Niger also called on the international community to lay the foundations, with the Islamic Republic of Iran, for a new relationship based on mutual trust and respect. Niger considered it urgent to ease, for humanitarian reasons, all unilateral economic measures that could prevent Iran from mobilizing the means to fight the COVID-19 pandemic.”

South Africa never thinks it is good for white people to beat up on people of color, and says it thinks the 2015 agreement was extremely important in world history and should be strengthened, not weakened. If I were Pompeo, I wouldn’t count on Pretoria.

Tunisia doesn’t seem to have been vocal about what it would do, but my guess is that they will vote as France and the other EU countries do. Tunis would like to stay on the good side of the US, and the current prime minister and president don’t much care for Muslim fundamentalist regimes like Iran. But I think the ties to the EU will overwhelm all other considerations.

Maybe the US could get the Dominican Republic and Estonia to vote with it, but that is about it.

I think a lot of countries mind what the US did. It was understood that when Iran mothballed most of its program, the UNSC would lift the economic sanctions it had placed on Iran. The UNSC did, except for the US, which did not because the Republican Congress insisted on keeping the sanctions. Since, however, the US threatens third party sanctions for trading with Iran, it means that de facto, the sanctions remain. So basically Iran gave up all the deterrent effect of a nuclear program and got nothing at all in return. In fact, Trump breached the treaty in May, 2018 and slapped a financial and trade embargo on Iran more severe than anything ever applied to any country by another in peace time.

The European countries on the UNSC would like to find a compromise, but the US draft allowed no room for a compromise.

So, I agree that in all likelihood, the US resolution won’t even get to the point where Russia and China would have to veto it. If it did, I think they would exercise their veto.

So all this maximum pressure on Iran and allies has backfired big time, and Iran and the Russian and Chinese arms industries are the big winners.