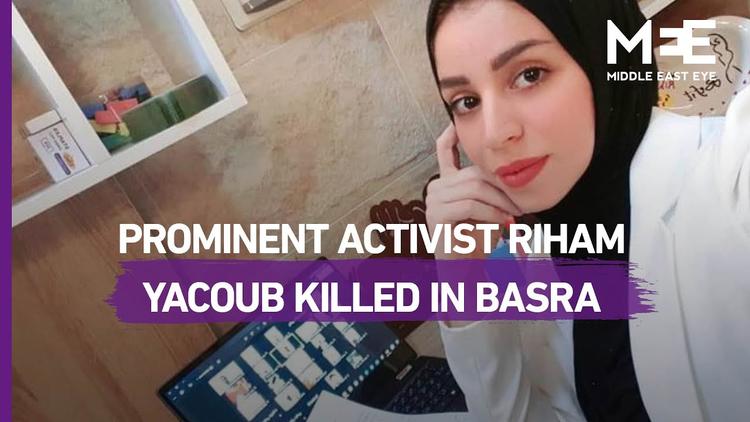 Hundreds of Protesters Dead Since October 2019; No High-Level Prosecutions

Human Rights Watch (Beirut) – Unidentified gunmen have since August 14, 2020, assassinated two protesters and wounded another four, all linked to a youth protest group with political aspirations in Basra, in southern Iraq, Human Rights Watch said today. They are the most recent victims of killings of hundreds of protesters in Baghdad and southern Iraq since October 2019, including by abusive security forces.

“The situation in Iraq has devolved to the point that gunmen can roam the streets and shoot members of civil society with impunity,” said Belkis Wille, senior crisis and conflict researcher at Human Rights Watch. “It’s unclear whether the federal government is even able to rein in the violence at this point and ensure justice for victims.”

The recent Basra victims had ties to the Al-Basra Civil Youth group, which youth protesters founded in 2014 to organize protests in the city, three members told Human Rights Watch. Members of the group recently decided to form a new political party to participate in parliamentary elections planned for June 2021.

“Since then, unknown Facebook accounts have launched a defamation campaign against our group, including by calling us anti-Islamic, because we are a secular movement,” one member said. Special Weapons and Tactics (SWAT) forces beat at least two journalists covering security force abuses at a protest in demanding justice for the killings.

On August 14, two masked armed men in civilian dress shot and killed Tahseen Osama Ali, 30, in his apartment and wounded his brother in the leg. The group members said that Ali was a prominent member of the group and regularly convened meetings of protesters in his office, downstairs from his apartment. In an August 9 Facebook post, Ali accused Basra’s police chief, Lieutenant General Rashid Falih, of failing to protect protesters and allowing criminal gangs to roam the city and kill activists and journalists.

On August 16, one of the group members said that as he was returning home from Ali’s funeral at about 10 p.m., he spotted a white Toyota Crown Royal Saloon car with blank license plates following him, but he was able to evade it. He said that someone knocked on his door two hours later, but when he opened it he only saw a car speeding away.

On August 17, Ludia Remon, an activist with close ties to group members, said unidentifiable armed men in a white Toyota Crown Royal Saloon opened fire outside her home on her and two friends involved in the protest group, Fahad al-Zubaidi and Abbas al-Subhi. Remon was hit in the leg and al-Subhi in his back, wounding both, she said, before they were able to drive away. The attackers’ car was visible in CCTV footage of the incident.

On August 19, an unidentifiable armed man on the back of a motorcycle shot and killed a protest movement leader, Reham Yacoub, as she was leaving the gym in her car. The attack also wounded a friend of hers in the car. Yacoub also had ties to the group.

“We are under threat,” said the member who had been followed. “A senior security official that I know warned us that our group is being targeted but didn’t know by whom. I have now gone into hiding.”

On August 17, after the attack outside Remon’s home, Prime Minister al-Kadhimi fired Chief Falih, and the governorate’s director of the National Security Service, an intelligence agency that reports to the prime minister. But he did not refer anyone in Basra for prosecution for the killings, as far as Human Rights Watch has been able to determine.

In 2018 in Basra, Interior Ministry forces injured dozens of people and killed several with excessive force when trying to disperse protesters.

On August 16, 2020, protesters gathered outside of the home of the Basra governor, demanding accountability for Ali’s death. Two journalists who attended the protest said that armed forces in SWAT uniforms beat them with wooden batons, kicked and slapped them when they saw the journalists filming SWAT forces beating protesters, and opened fire with live ammunition into the air. Some protesters were also throwing rocks and Molotov cocktails at SWAT forces and lighting cars on fire, the journalists said.

One of the journalists said she went to court on August 18 and filed a criminal complaint against a SWAT commander for hitting her so hard that it burst her eardrum. “Since that day, unknown Facebook and Instagram accounts have been attacking me, accusing me of being supported by the US, and accusing me of giving money to protesters to turn out,” she said. “If they know about the criminal complaint I filed, I don’t know how they found out, I didn’t post anything about it.” She said that these allegations were tantamount to calling for her to be assassinated.

The protests across Iraq that began in October 2019 have continued. Clashes with security forces have left close to 560 protesters dead in Baghdad and Iraq’s southern cities, according to the federal government’s own estimates. In May. when al-Kadhimi took office, he formed a committee to investigate the killings of protesters. But as of late August, the committee had yet to announce any findings. In July, the federal government announced it would compensate the families of those killed, and that it had arrested three low-level security forces members. As far as Human Rights Watch has been able to determine, no senior commanders have been prosecuted.

On July 6, unidentified gunmen on a motorcycle assassinated a prominent political analyst, Hisham al-Hashimi, outside his home in Baghdad. Al-Hashimi was well connected to Iraq’s political elite, including its prime minister and president. Before the killing, al-Hashimi had focused much of his work on researching and criticizing abusive behavior by the Popular Mobilization Forces (PMF or Hashad), formally under the prime minister’s control. Despite commitments from al-Kadhimi, as far as Human Rights Watch has been able to determine, no one has been arrested for the killing and authorities have not provided any transparency on the progress of the investigation.

The Iraqi federal government should make the preliminary findings of the investigative committee into the deaths of protesters public immediately and set out a clear timeline for the committee’s final report.

The government should make public the number of investigations it has referred to the judiciary into armed forces’ behavior, including into PMF members, since protests began in 2019, including the most recent killings. It should include details of the outcomes of the investigations, including sentences given and sentences served, as well as other disciplinary action taken. The government should publicize the steps it is undertaking to investigate killings by non-state armed actors and results achieved. It should present publicly all measures it is currently undertaking to prevent future abuses by armed forces in protest contexts.

“The renewed targeting of protesters in Basra highlights the continued climate of impunity and efforts by armed actors to silence dissent,” Wille said. “Until authorities properly prosecute these horrific killings, protesters are risking their life every time they head out into the streets.”