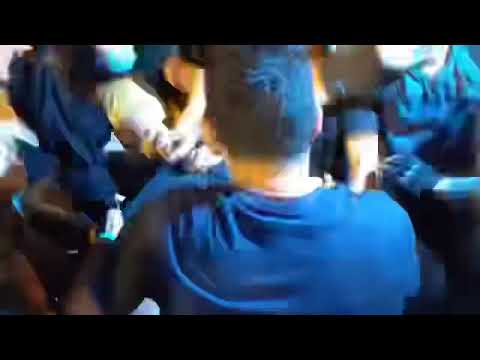 Ann Arbor (Informed Comment) – The Israeli-Palestinian newspaper Arab48 reports that tens of thousands of protesters came out against Israeli prime minister Binyamin Netanyahu on Saturday, in what has become a weekly ritual for the past three months that has grown larger and larger.

The rallies disproved the allegation of pro-Netanyahu pundits that the recognition of Israel by the United Arab Emirates would be recognized as a major diplomatic achievement for the prime minister and would cause the demonstrations to fizzle.

In Jerusalem alone, Israeli television news Channel 11 estimated that 10,000 demonstrators joined processions and sit-downs in the streets. Some 1,000 clashed with police in front of the prime minister’s residence on Balfour Street. Police used force to clear protesters from Paris Square near the prime minister’s residence, hauling some of them off in vans. The protesters said that police assaulted them with unnecessary brutality. As many as 50 protesters were arrested there, according the Palestine News Network. A policeman was injured by rock throwing.

Embed from Getty Images
Israeli policemen remove demonstrators during an anti-government demonstration in front of the Prime Minister’s residence in Jerusalem on August 22, 2020. (Photo by menahem kahana / AFP) (Photo by MENAHEM KAHANA/AFP via Getty Images).

Israeli police did not issue a permit for a rally on Saturday, saying that the weekly demonstrations were interfering in routine life in the city and causing hardships for residents. Israel does not have a written constitution. The Israeli Supreme Court has recognized freedom of speech and assembly as basic rights, but the government has broad discretion to curb such rights, especially on security grounds.

The demonstrators came out anyway, filling streets and making them impassable as part of their protest. The police initially attempted to block their procession, and 7 persons were arrested. In the end, the police let the crowds surge toward Netanyahu’s residence, where they hoisted huge balloons caricaturing Netanyahu and his partner in the national unity government, Benny Gantz.

Some of Saturday’s demonstrators throughout the country hailed from the small Black Flag movement, the leaders of which say they want to save Israeli democracy from Netanyahu’s assault on it.

Israeli Channel 12 said that throughout the country, protesters flooded into major intersections or gathered on bridges for anti-Netanyahu rallies.

The protesters are demanding that Netanyahu, who is on trial for corruption, step down while court proceedings are under way. The trial began in May and could drag on for two or three years.

In a parliamentary system, there is no way for the protesters actually to change the government, and I confidently predict that Netanyahu will not voluntarily step down.

Ironically, the government may fall anyway. The Times of Israel reports that if Netanyahu’s far right Likud Party cannot agree on a budget with coalition partner the centrist Blue and White Party by Monday night, the government will fall and the country will go yet again to new elections. The parliament can vote to extend the deadline if the two major blocs cannot come to an agreement by then, but it isn’t clear that that is what Netanyahu wants.

Netanyahu has an agreement with Benny Gantz, the head of Blue and White, but is attempting to change its terms. Given his corruption trial, he is trying to get more control over the appointment of senior law enforcement figures, including state prosecutor, contrary to his agreement with Gantz. Likewise, he is trying to limit the budget legislation to only 2020, which some suspect is his way of reneging on his agreement to rotate out of the prime ministership in 2021 in favor of Gantz.

Clashes between police and protesters in Israel 22/8/2020