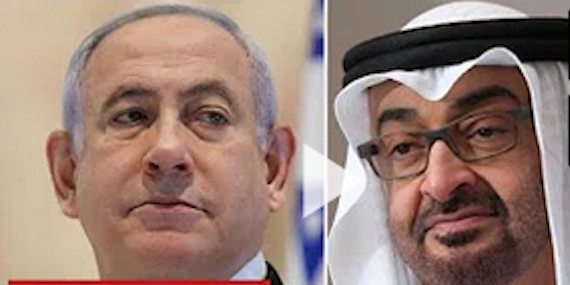 Ann Arbor (Informed Comment) – Trump’s announcement Thursday that the United Arab Emirates (UAE) would recognize Israel was presented by the White House as a diplomatic achievement. The problem is that it achieved nothing, at least with regard to the Israeli-Palestinian issue. The step was, however, politically and economically expedient for the signing parties. The Emirates is a union of seven Gulf sheikhdoms, though oil-rich Abu Dhabi is their de facto leader. The population is 9.6 million, but only about a million of those are citizens, with the rest being guest workers who can be rotated out of the country at will. The citizen population is like that of Rhode Island. The UAE gross domestic product, driven by oil in Abu Dhabi and by finance and tourism in Dubai, is $405 billion, slightly higher than Israel’s $387 billion.

1. What Trump got out of the announcement:

a. It will please the Israel lobbies and he hopes it will help him in Florida, which has a large Jewish-American population, many of them retirees. This voting bloc has soured on Trump because of his poor handling of the coronavirus pandemic, inasmuch as they are a high risk population. In other words, they know he is trying to get them killed. In general, Trump is way down in Florida, with Biden polling at 51% in high quality polls in which Trump comes in as low as 38% and no higher than 46%. The UAE is a small country with a citizen population of only about a million people (and another 8 million guest workers), and despite its high-tech weapons purchases, has never posed a military danger to Israel. In fact, Abu Dhabi has had many friendly behind-the-scenes dealings with Israel. So this treaty is more a recognition of reality than a real breakthrough, and it is unclear that Trump will get much of a bump from it.

b. It cements an American-backed anti-Iran axis consisting of the UAE, Saudi Arabia, Bahrain and Israel. Trump has erected an international trade and financial embargo on Iran, but is opposed in this by China, Russia and the European Union. The Saudi-UAE-Bahrain axis offers basing for US military forces as well as for electronic surveillance, and the addition of Israel increases all those capabilities.

2. What the UAE gets out of the agreement: Abu Dhabi will now be adopted by the American Israel Public Affairs Committee (AIPAC), an umbrella for thousands of pro-Israel organizations, which is the most effective lobby in Congress. It may qualify for higher level military technology transfers as a result. Markets may also open to it. After Hurricane Katrina, Dubai Ports suggested that it could rebuild and take over the port of New Orleans, but faced public backlash. Its image will now be substantially burnished. The price of Trump’s economic pincer on Iran is that some UAE tankers have suffered mysterious fires likely as a result of Iranian sabotage. The Emirates already benefit from a US security umbrella, but that protection is now even stronger. The Emirates will likely be read in to US and Israeli intelligence on Iran if it hasn’t already been.

3. What Israel gets out of the agreement: The Arab League boycott of Israel was never effective, and it has been a long time since any Arab country posed a credible conventional military threat to Israel. Egypt has had a peace treaty since 1978, and Jordan since 1994. Still, Arab non-recognition was a way of pressuring Israel to cease colonizing the West Bank, and the UAE has just reduced that pressure.The UAE is a major petroleum and finance center, and offers, as Forbes notes, opportunities for Israeli investment and business partnerships that could be very lucrative. Gaining an avowed ally against Iran in the region is also a strategic benefit.

4. What the Palestinians get out of the agreement: Nothing. Netanyahu’s annexation plans had already been scotched by Jared Kushner and by his own partner in the national unity government, Benny Gantz. He practically speaking gave up nothing. The Palestinians remain under Israeli military occupation. Israel continues to steal Palestinian land and water and to divert these resources to Israeli settlers, which it actively sends in as squatters. Palestinians are routinely attacked by these armed settlers, including just this week. Palestine recalled its ambassador from Abu Dhabi and a Fateh spokesman, Abbas Zaki, denounced the treaty as “a losing bet” and an act of “subordination to the enemies of the Arab nation.”

5. What it means for Iran: Very little. The Emirates play both sides against the middle, and it is alleged that Dubai banks have been major launderers of money and conduits for Iranian economic enterprises, as a way of avoiding US sanctions. That is unlikely to change, though it may have to be hidden even better. Despite their US-provided F-16 fighter jets and other fancy equipment the Emirates are too small and vulnerable to pose a military threat to Iran. Some 5,000 US troops are already stationed in the UAE. Diplomatically, the anti-Iran axis has been strengthened, since it is now out in the open. But given the crushing economic burden that Trump has placed on Iran, and given China’s new interest in adopting Iran as part of its One Belt, One Road project, Gulf diplomacy doesn’t amount to much. Iran is developing ports on the Arabian Sea, beyond the Straits of Hormuz, to export oil and other goods, making the Gulf less salient to Tehran. With regard to regional public opinion, Iran benefits from being viewed as one of the few remaining strong supporters of the Palestinians. That reputation is only increased as Arab states defect to the US and Israel. One reason Saudi Arabia did not immediately join the Emirates in this step is that, unlike the other Sunni Gulf monarchies, it has a substantial citizen population of over 20 million, and many (not all) strongly support the Palestinians.