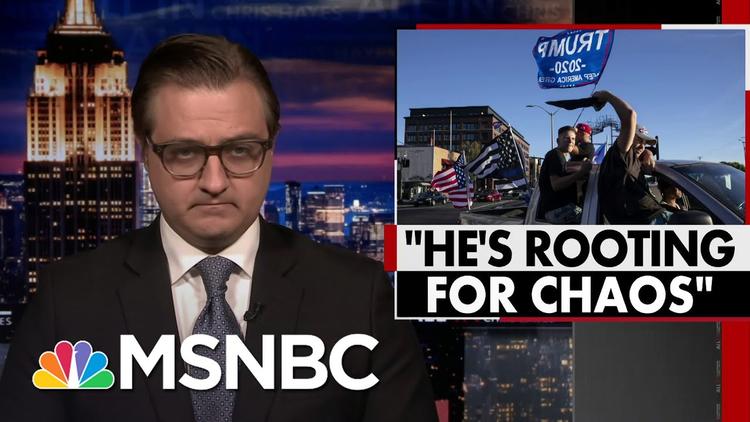 Sacramento, Ca. (Special to Informed Comment) – During the Republican National Convention, in his fantasy world, Trump paralogized a “liberal dystopia” claiming: “I’m the only thing standing between the American dream and total anarchy, madness and chaos.”

In the real world, the opposite holds true. If, after the November 2020 elections, Trump is left standing, madness will reign sovereign, while chaos, perhaps even anarchy, become a more likely scenario than if he was gone. Disappointment and anger are two incendiary ingredients that fuel chaos and anarchy. A recent poll by Pew Research Organization shows that the voters’ disappointment and anger will be significantly greater should Trump win a second term. Among all voters, a clear majority of 57% say they will be either “Disappointed” (24%) or “Angry” (33%) if Trump wins. If Biden wins, the figure drops down to 47%, with the “angry” percentage reduced by half (17%). If we compare the reactions of the supporters of each candidate to losing the election, nearly twice as many Biden supporters describe their emotions as angry compared to Trump supporters (61% vs. 37%).

As for Trump self-anointing himself the keeper of the American Dream, after the 2007-8 financial meltdown, Americans pretty much gave it up. So did Trump. In 2015, when he announced his candidacy for the presidency, Trump declared: “Sadly, the American dream is dead.” Today, not even the ever-duplicitous Trump can seriously claim the American Dream is alive and well ready for the Democrats to destroy it once again!

For most of its lifespan, the American Dream has remained an elastic idea meaning different things in different eras and to different peoples. Its nearest origin goes back to the Horatio Alger myth popularized during the Gilded Age of late 19th century America. The term, however, was coined by James Truslow Adams in his 1931 book, Epic of America to convey the “dream of a land in which life should be better and richer and fuller for everyone, with opportunity for each according to ability or achievement.” Over the years its meaning has ranged from very broad to narrow. In its broad rendition, the dream enshrines the pie-in-the-sky belief that “anyone, regardless of where they were born or what class they were born into, can attain their own version of success in a society where upward mobility is possible for everyone.” In its unadorned version, the Dream has come down to the goal of homeownership for the working class. More importantly, over the years most Americans have learned to downsize their version of the dream. Today, eight out of ten Americans have shrunk the scope of their American dream to one of attaining “financial security for themselves and their family.”.

Even in one of the most optimistic polls about the American Dream in 2020, “just over half (54%) of US adults think the American Dream is attainable for them.” Among them, however, only 46% of Millennials (born between 1981-1996) believe it is “within reach for them personally”, less than either the older or the younger generations. This is no accident. Millennials are most directly grappling with the challenges and obstacles in the path of reaching their American Dream. “Crippled by debt and bereft of Horatio Alger paths out of it,” millennials “mock the traditional American tenet that each generation will be better off than the one before.”

If the attainment of the American Dream ever was as ubiquitous as the American public has been led to believe by politicians and the media, it might well have been due partly to an artifact: our fixation on hyping the successful stories while overlooking or discounting the failed ones. However, defined, the uninterrupted growth in income inequality in America, a compliment of stagnant wages of the past decades, all points to the Dream’s fairy-tale pedigree.

One final finding from the Pew poll comparing Trump and Biden supporters discussed earlier is worth reflecting upon: the percentage of all voters who say they would feel “relieved,” should one or the other candidate wins. If Trump wins, 28% of the voters feel “relieved,” but if Biden wins, it jumps to 42%. Indeed feeling “relieved” is the dominant reaction to Biden’s victory among all voters, paling “disappointed” (30%) “angry” (17%), and “excited” (9%). Even though only 9% of all voters feel “excited” about Biden’s victory, over 40% of them say they would be “relieved” if he wins. This suggests that American voters are prepared to say good riddance to their deranged president, even if they don’t feel excited about his successor. Bottom line (excuse the pun): sanity trumps madness. Left unexplored by the polls is the likelihood that, should Trump lose, would he enflame his Blackshirt goons –the white supremacist and extreme right-wing militias—to descend upon our cities to start the anarchy, chaos, and madness he forewarned about?