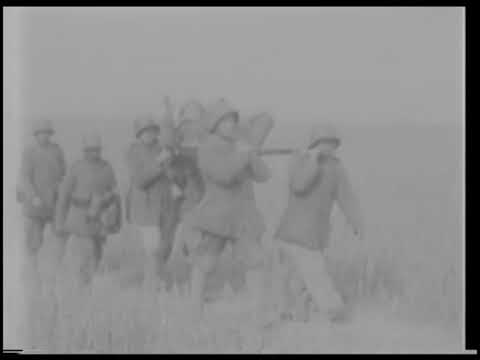 Ann Arbor (Informed Comment) – Jeffrey Goldberg at the Atlantic reported yesterday on what he was told by four members of Trump’s entourage about the president’s 2018 visit to France. He had been scheduled to visit the Aisne-Marne American Cemetery near Paris, but it was raining and he made excuses.

Goldberg’s sources told him that Trump asked of World War I, “Who were the good guys in this war?”

He added that Trump said of the cemetery visit, “Why should I go to that cemetery? It’s filled with losers.”

He later called the more than 1,800 marines killed at Belleau Wood “suckers” for having sacrificed their lives.

Social media is aflame with Marines and relatives and friends of Marines reacting angrily to the revelations. Belleau Woods or in French Bois Belleau is a storied battle in the history of the Marine Corps.

Being a historian, I thought I would underline its importance with a couple of accounts. One is from interviews with a veteran who had fought there. The second is by a war correspondent who saw the first day of the campaign with his own eyes.

Col. Michael C. Howard of the US Marine Corps wrote,

“On 27 May 1918, German Gen. Erich F. W. Ludendorff, bolstered by the massive flux of troops from the Eastern Front where Russia had been knocked out of the war by revolution, launched a devastating offensive.”

He explained that the Germans reached the outskirts of Paris in only four days.

Gen. John Pershing had been pressed to just put the US Marines under French command, but insisted on them retaining their independence. The US Marines stopped the German advance and then went on the offensive against them on June 6, 1918.

“More Marines were killed in action and wounded this first day (1,087) than in all previous Marine Corps engagements combined.”

That June, the Germans deployed mustard gas against the Marines, with devastating health effects for those who survived. Howard briefly tells the story of Cecil Key, who was blinded and suffered burns from mustard gas, but eventually recovered his sight and lived into the 1990s.

In the article, “MARINES CONTINUE DRIVING ENEMY BACK,” The Associated Press reported on June 7 about the Marines’ offensive on the previous day, the costliest for the Corps up until that point in history.

“The one point where the objective was not reached was on the right of the attack in the Belleau Wood. The fiercest fighting was continuing there . . .”

“The marines in their forward sweep took strong ground on either side of Belleau Wood and cleared out the ravine south of Torcy, which linked up the line with Hill 142, which was taken yesterday morning. This gave them a strong and dominating position for a continuation of their attack. Their total advance was approximately two miles on a three-mile front.”

The captured German soldiers displayed poor morale, saying they were glad to be out of the fighting. But they had nevertheless fought determinedly, AP reported:

“the marines dashed into them yelling like Indians and plying bayonet and rifle. One marine who was taking back a prisoner ran into two German officers and 10 men. He tackled them single-handed with his rifle and bayonet, killed both the officers and wounded seven of the men . . .”

“The marines advancing in the Belleau Wood region went forward in four waves in open formation. The men in the first wave were for the most part armed with rifles and bombs, while the rear waves were equipped with automatic rifles. With them came squads of machine gunners lugging their collapsible guns. They crossed the open space and toiled up the slope bent over like gnomes. The trenches the marines passed over were clearly visible from below but they hardly deserved the name, for they were simply lines of little holes, big enough to hold a man, while barbed wire was lacking. There was some, however, interlaced among the trees of Belleau Wood but the marines pushed their way through it . . .”

“On all sides the guns were flashing, some of them stationed right in the field, while others were hidden in the woods. Looking down into the valley only a mile away, the village of Busseires could be seen on fire. As the correspondent watched the scene the clouds of white shrapnel smoke over the village of Torcy also became brownish and flames appeared in that town.

The artillery fire that preceded the attack lasted an hour and was of especial intensity for five minutes preceding the time when the marines went over the top . . .

It appears that the marines in going in forestalled an attack the Germans had planned . . .”

This was only the beginning. As with most battles in that horrible war, the campaign ground on for months. It wasn’t until October 29 that American newspapers proclaimed that the Marines had all of Belleau Woods (“for the sixth time”). The New York Times headline on Nov. 2 was, “TIME BOMBS LEFT TO KILL AMERICANS: Infernal Machines Ingenious, Some Exploding Long After Germans Have Gone.” The improvised explosive devices or IEDs in Iraq were not exactly a new technology.

Goldberg quotes a general close to former chief of staff John Kelly, who said that Kelly became convinced that Trump could not understand actions that were not transactional. People who lose their lives fighting for others are in his lexicon “losers.” Non-losers are out for themselves and get rich, apparently.

The White House is denying Goldberg’s story. But Goldberg was a cheerleader for the Iraq War and a defender of far-right Israeli prime minister Binyamin Netanyahu, so he isn’t exactly a bleeding heart liberal. If even he is pursuing leads on a story that reflects so badly on Trump, it is because the story is true.

Long-time readers know that my father served for two decades in US army, mostly in the Signal Corps, and I grew up on military bases. GIs were my friends and mentors. They were in a potentially dangerous occupation, and their eyes were open. They were successors of Cecil Key at Belleau Woods, who suffered mustard gas burns there for his country. The only one short-changed is Trump, who cannot imagine self-sacrifice for a cause greater than oneself. It is a stain on the escutcheon of the presidency that Trump occupies that position.

Images from the era of the Battle of Belleau Woods, 1918