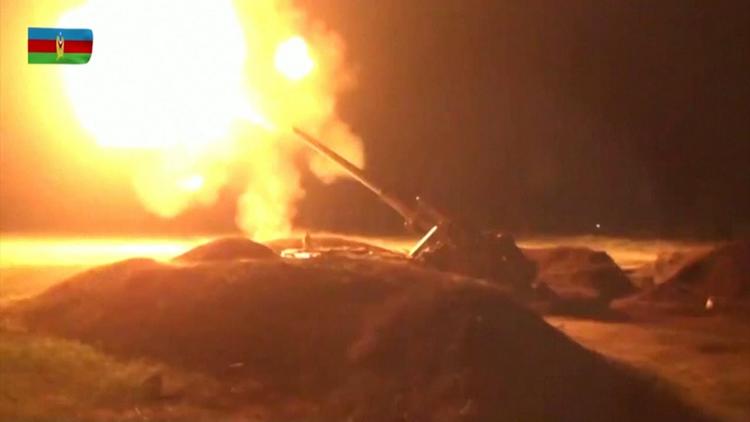 Belgrade (Special to Informed Comment) – Clashes between Azerbaijan and Armenia over the disputed region of Nagorno-Karabakh threaten to destabilize the Caucasus. Turkey and Russia – the major foreign actors in this proxy conflict – are still not directly involved in bloodshed that erupted on September 27, although Ankara openly supports Baku by providing full political and propaganda support, while the Kremlin hesitates to side with its ally Yerevan, as it aims to preserve the role of the regional arbiter.

There are reports that Ankara transferred its proxies from Syria and Libya to fight the war in Nagorno-Karabakh, also known as Artsakh – a region of Azerbaijan that has been under the control of ethnic Armenian forces backed by Yerevan since the conclusion of war in 1994. Turkey, however, denied such accusations. On the other hand, there are claims that Armenia is attempting to transfer hundreds of Kurdish fighters from Iraqi Kurdistan to Nagorno-Karabakh via Iran.

The Iranian state has long been firmly allied with Armenia, and is in danger of being drawn into the conflict, as unconfirmed video circulated appearing to show that Iran had shot down an Azerbaijani drone that entered its territory. Although some Iranian clerics reportedly urged their country to support fellow Shiia Azeris, Tehran ironically enough aligns with Christian Armenia. It is worth noting that, according to Iranian reports, during heavy clashes between the Azerbaijani Armed Forces and Armenia-sponsored Artsakh troops several rockets landed in Iranian villages near the line-of-contact between Azerbaijan and Nagorno-Karabakh. Tehran had to deny that it allowed the passage of Russian weapons bound for Armenia after unverified video footages were posted on social media.

Russia is also Armenia’s ally, since Yerevan is a member of the Moscow-led Collective Security Treaty Organization (CSTO), although that does not necessarily mean that Russia will directly get involved into the conflict over Nagorno-Karabakh. According to Key Article 4 of the Treaty, “if one of the States Parties is subjected to aggression by any state or group of states, then this will be considered as aggression against all States Parties to this Treaty”. However, Azerbaijan attacked the Armenia backed self-proclaimed Republic of Artsakh, not Armenia itself, which is why for Moscow hostilities in the disputed region are seen as a showdown between Armenians and Azerbaijanis for control over Nagorno-Karabakh. In other words, Russia is attempting to maintain good relations with both, Yerevan and Baku. Although the two sides are de facto at war, as they both declared martial law and mobilization, Azerbaijani President Ilham Aliyev and Armenian Prime Minister Nikol Pashinyan turned up on the same Russian primetime TV show to explain their positions on the conflict.

The Kremlin is still trying to portray itself as a key mediator in this decades old conflict, as any changes on the ground would ruin not only Moscow’s reputation, but also its lucrative position. Over the years, Russia has been selling weapons to both, Armenia and Azerbaijan, and even though Yerevan is a member of Russia-dominated Eurasian Union, the trade turnover between Russia and Azerbaijan reached $3 billion in 2019, which is much higher than the trade balance Moscow has with Armenia. Also, Azerbaijan is an energy-rich country, and two pipelines that carry oil and gas from the former Soviet republic westward through the Caucasus both pass near the disputed Nagorno-Karabakh region.

In case the conflict spills over the borders of the disputed territory, the very existence of the energy corridors could be under threat. Still, at least at this point, such an option does not seem very likely as that would have a strong impact on Turkey’s energy supplies. Natural gas and crude oil, rather than alleged Neo-Ottoman and Pan-Islamic ambitions, are the key reasons for Turkish explicit support to Azerbaijan, as Ankara aims to reduce its dependency on Russian energy. That is why, for Turkey, Baku is the most important partner in the Caucasus and Ankara remains one of the most important buyers of the Azeri energy.

Russia’s interests in the region are also based mostly on energy. The Kremlin aims to prevent the construction of the Trans-Caspian pipeline, as well as Southern Gas Corridor, as such projects would bypass the Russian Federation and undermine the country’s influence in the Caucasus. As long as there are hostilities between Azerbaijan and Armenia, flawless gas and oil supplies to Europe via Turkey will be under threat. Since

Finally, it is worth remembering that Turkey pushed its proxies in Libya to capture the energy-rich Sirte province, but after Russia, Egypt France and the United Arab Emirates warned Ankara not to cross the “red line”, none of the sides managed to break the stalemate in the conflict over the North African country. Given that the Nagorno-Karabakh war has been treated as a frozen conflict over the past 26 years, it is very unlikely that situation on the ground will radically change without wide deals between Russia and Turkey.