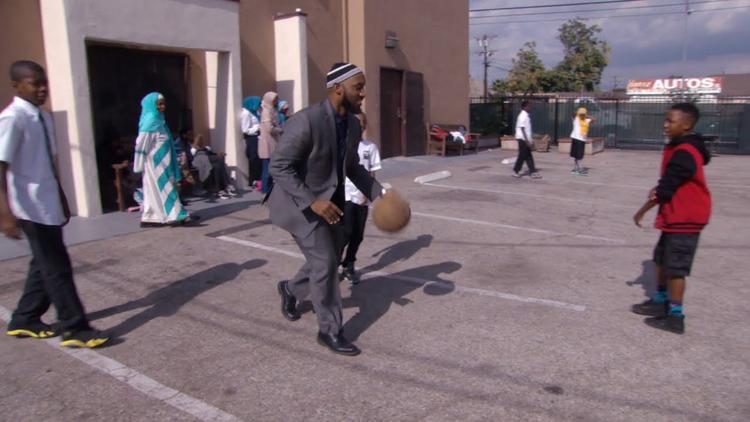 A pioneering professional development course that’s been training teachers to confront anti-Muslim and anti-Arab hate for over a decade faces political threats and shut down.

( Waging Nonviolence ) – As Muslim and Arab students join their classmates in heading back to school this fall, the 19th anniversary of the Sept. 11 terror attacks weighs on their minds. It’s a time of perennial blame and shame, a time when classmates and teachers hold them unjustly responsible for a national tragedy they also mourn. Many experience being called a terrorist and, if a Muslim, having their religion deeply misunderstood, maligned and denigrated. As a result, they have learned to suffer silently or hide their identities.

While few efforts exist to put an end to this problem, one group of teachers in Los Angeles — which is home to both one of the largest school districts and Arab American populations in the country— has been working for over a decade to confront the elephant in the classroom. It all started in 2005, when they were approached by the Quaker organization American Friends Service Committee, or AFSC, and its Middle East Peace Education Committee. They wanted the teachers to take advantage of a perk afforded by their progressive union, United Teachers Los Angeles, or UTLA, and create a new kind of professional development course addressing Islamophobia and Arabophobia.

The teachers agreed and, together, they set about designing a course for their colleagues that would dispel misinformation, misunderstanding and irrational fears — while at the same time promote the history, culture and contributions of people from the Arab Middle East. Titled “Learning About Islam and the Arab World,” the course was approved that year by the Joint Labor Management Salary Point Committee, or JSPC.

“The 16-hour two-day class taught teachers about positive achievements of Arabs and Muslims throughout history, while providing them the opportunity to ask questions about aspects they didn’t understand, or for which they had only negative information,” said Linda Tubach, one of the teachers who helped design the curriculum.

According to Rola Karam, chair and lead organizer of the workshops, they tried to emphasize the importance of talking to students about what was on the news — such as the U.S.-led war on Iraq, occupation of Palestine and Middle East refugee crisis. “These are teachable moments, which are potentially transformative,” she said. “Students look to us to make sense of human conflict with deep historical roots and dramatically divergent perspectives.”

While the course became highly successful — drawing more than 1,000 educators from 2005-2018, often with a waiting list to enroll — adversity struck in October 2017, when the Los Angeles Unified School District, or LAUSD, began receiving complaints that the curriculum portrayed Israel critically. They came from an organization called the Israel Group, which says it “protects Israel in the diaspora by developing and launching initiatives to cripple the BDS movement,” or the boycott, divestment and sanction of companies doing business illegally in the West Bank, Gaza and East Jerusalem. Moreover, the Israel Group had launched a social media campaign accusing the LAUSD and UTLA of promoting anti-Semitism by discussing BDS.

The Fellowship of Reconciliation-LA’s Arab World Education Committee (which has sponsored the class since 2007) was quick to dispute the claim. According to Karam, who chairs the FOR committee, “The classes present facts and a variety of sources including from Jewish organizations, some of which support BDS as a legitimate form of nonviolent resistance in the struggle for Palestinian self-determination. We leave it up to the participants to think critically and draw their own conclusions.” She insists that all course materials reflect, and are in keeping with, international law — including scores of UN General Assembly and Security Council Resolutions condemning Israel’s illegal occupation and colonization of Palestinian land, and providing for their right of return. “These resources are perfectly acceptable components of our curriculum,” Karam said.

In response to the Israel Group’s complaints, the LAUSD sent staff to observe one of the classes in October 2017. The observers issued a report to the superintendent and the Board of Education stating that the presenters met and surpassed all guidelines and criteria. Specifically, they taught to the class agenda, were knowledgeable about the topics, engaged participants in dialogues and activities where diverse viewpoints were encouraged, provided multiple sources to help participants formulate their own opinions, promoted the values of peace and inclusiveness, and respectfully responded to two non-district individuals who repeatedly challenged the presenters. According to Tubach, “LAUSD staff did not observe any evidence of concerns raised by community members about the course.”

The contract for this version of the class expired in 2017, and in August 2018, Karam submitted a proposal for a new class called “Introduction to the Arab World and Islam.” The JSPC unanimously approved the proposal for a new five-year contract. However, in October 2018, the district’s assistant chief of human resources officer sent a memo to the JSPC citing “issues related to potential safety of our employees participating in the course.” As a result, the district wouldn’t offer the course until 2019, and would move it to an online format and platform.

UTLA responded to this announcement by filing a formal grievance with the district, arguing that its action violated a section of the collective bargaining agreement that gives the JSPC sole authority to approve salary point classes. What’s more, the agreement states that JSPC’s decisions are final and binding. At the same time, the union also requested, but never received, evidence to substantiate the “potential safety” issues.

After months of district inaction on the grievance, UTLA Secondary Vice President Daniel Barnhart published an article in the union’s August 2019 newspaper titled “LAUSD Censors Long-standing Professional Development Class.” In it, he called upon educators to play a frontline role against the ignorance, bias and hate that precede acts of violence, by learning and teaching about the roots of anti-immigrant, Islamophobic, anti-Jewish, and xenophobic racism in the classroom. “Our students, and their families, need us to make sure that they are seen in our classrooms, that their stories are heard in our curriculum, and that we have the professional preparation to make sure that happens,” Barnhart wrote.

According to Tubach, the salary point class was cancelled despite the district mandate that teachers and all health and human services professionals complete two units of coursework to meet its multicultural awareness requirement. She finds it ironic that the district would stop providing a professional development workshop that not only meets this requirement but also addresses the roots of Islamophobia, when hate crimes against Muslims and Arabs have spiked in recent years. “Why is this the only salary point class out of many that are offered for multicultural competency to be unilaterally postponed by district management and told to change to an online format?” she asked. “This is disparate treatment, and we think the district is simply caving to the threat of blowback from the Israel Group.”

These issues are particularly relevant as the LAUSD shut down the workshops at a critical moment. According to Sahar Alsahlani, board member of the Council of American Islamic Relations-New York, “There has been an uptick in Islamophobic hate crimes, unprecedented since the immediate aftermath of 9/11.” In the past five years, the climate has grown increasingly hostile towards Muslims and Arabs, as many Republican candidates, in particular, have run on platforms steeped in anti-Islam vitriol and fear-mongering. From Sen. Ted Cruz of Texas stating that American Muslims are potential “security risks” and “only Christian refugees should be allowed into the country” to President Donald Trump’s unconstitutional “Muslim Ban,” there has never been a greater need to improve the public’s understanding of Arabs and Muslims.

“Educators are on the frontlines in confronting ignorance and inoculating students against hate and bias,” Karam said, noting the importance of training workshops like the “Introduction to the Arab World and Islam” course, which she feels is weakened by the online format. “This strips it of one of its greatest strengths: interpersonal engagement and interaction. Sometimes the best exchanges of information are over lunch while sharing Middle Eastern food.”

After many months of no response from district management, UTLA moved the grievance to arbitration and the hearing date was set for April 3, 2020. However, all arbitrations have been postponed indefinitely due to the COVID-19 pandemic. At this point, FOR-LA’s Arab World Education Committee sought support from legal counsel, which was able to make a public records request to the district, after the publication of the article about the course cancellation in the UTLA newspaper. Additionally, the district has been asked by counsel to respond to the committee’s demand that the class resume in the format approved by the JSPC for five years, as soon as face-to-face instruction is possible.

For the time being, UTLA and the FOR-LA are just waiting for district management to respond. According to Karam, “Our new class is even more interactive and has enhanced sections on addressing stereotypes — exactly what the district wants out of a multicultural awareness professional development course.” Meanwhile, other school districts across the country facing similar challenges in addressing Islamophobia and Arabophobia have yet to adopt such professional development workshops. In this regard, the survival of “Introduction to the Arab World and Islam” is imperative not only for teachers and students in Los Angeles, but the rest of the country, which can look to this professional development curriculum as a model and inspiration.

Susan H Smith is director of operations at the Fellowship of Reconciliation, community liaison for the Muslim Peace Fellowship, and a member of the intentional multi-faith Community of Living Traditions at Stony Point Center, NY. She is involved in migrant justice and anti-Islamophobia work at local, national and international levels.