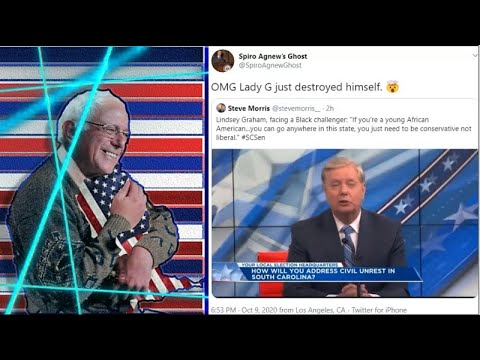 Ann Arbor (Informed Comment) – Lindsey Graham couldn’t have another debate with his rival for one of South Carolina’s senate seats, Jamie Harrison, because he wouldn’t take a COVID-19 test and Harrison quite rightly declined to be on the same stage with someone who had been hanging around with Donald “Typhoid Mary” Trump. The two therefore had a televised conversation instead.

Harrison pointed to systematic racism as a problem, and Graham denied it. He pointed to SC senator Tim Scott, who is Black, and former governor Nikki Haley as proof that African-Americans and immigrants could succeed in the state if they are conservative. Graham said,

“Do I believe our cops are systemically racist? No. Do I believe South Carolina is a racist state? No. Let me tell you why. To young people out there, young people of color, young immigrants, this is a great state, but one thing I can say without any doubt, you can be an African American and go to the Senate but you just have to share our values.”

Graham went on to remark, “If you’re a young, African American or an immigrant, you can go anywhere in this state, you just need to be conservative, not liberal”.

That sounds pretty horrible, but to be fair, Graham did not mean by “go anywhere” to move physically around. He meant you could “rise to the highest office in the land.” Under South Carolina’s Jim Crow laws until the Federal government invalidated them, there were places African-Americans could not go, and the memory of that humiliation was unfortunately revived by Graham’s thoughtless diction.

But even if Graham did not say what it sounded like he said, it is worth pondering his thesis.

He was arguing that the Democratic Party is alien to South Carolina, and the core essence of the state is what he calls “Conservative,” by which I take it he means “Republican.” Let us examine that proposition below.

He was also arguing that South Carolina is color-blind. Now, now. No laughing. We are being serious.

Graham might want to explain why African-Americans account for half of those shot by police in his state, whereas they are 27% of the population.

As for that Conservative essence, it is a unicorn. Graham made it up. He makes up a lot of sh*t.

Harrison wouldn’t be pulling neck and neck with Graham if what Graham is saying were true. And, some back of the napkin figuring can show why Harrison has a shot.

The population of the state is roughly 5 million. Some 27 percent are Black. That is 1.35 million people. Only 7 percent of them or 94,500, say that they are Republicans.

That is 1,255,500 people in South Carolina who Lindsey Graham says cannot “go anywhere” because they are not Conservatives.

Actually, another 2.2 percent (110,000) say they are mixed-race, and I suspect they are equally unlikely to be Republicans. So that’s another 102,300 who aren’t going anywhere.

So I count 1,345,000 white people who aren’t going anywhere according to Lindsey Graham.

Then Asian-Americans and Native Americans, who trend Democratic nationally at least, are about 1.8 percent. Nationally, registered Asian-American voters give the Democratic Party favorable ratings by 58%.

Our total of South Carolinian non-Conservative deadenders comes to . . .

And I didn’t even count the Latinos, who are probably another 2 percent and heavily Democratic.

You note that since we figured the total population at 5 million, the resulting number of non-conservatives who are not like Nikki Haley or Tim Scott is a majority of the state.

The only way South Carolina is a consistently conservative state is that all eligible African-Americans don’t actually vote, and also a lot of the non-Conservative white people don’t. If you had an Australia-style mandatory universal voting system in the Palmetto state, it might be consistently Democratic.

By the way, those counties that had the most lynchings during Jim Crow have the lowest rates of African-American voter registration today.

Many obstacles are put in the way of African-American voters, including losing wages from having to take off work on a Tuesday to vote. African-Americans have to wait on average twice as long in line to cast a ballot as whites.

So Graham’s depiction of South Carolina as consistently open to talent as long as it is Conservative talent is simply not true. People Conservative enough to tell pollsters they are die-hard Republicans are a minority in the state.

Another corollary of the Graham thesis would be that there should be some Republican members of the House of Representatives from South Carolina who are Black. None are. The only African-American from the state in the House is a Democrat. In fact, I do not believe that there were any African-American congressional representatives from South Carolina between 1900 and the election of Jim Clyburn in 1993.

So Tim Scott is rather being invoked as a token here.