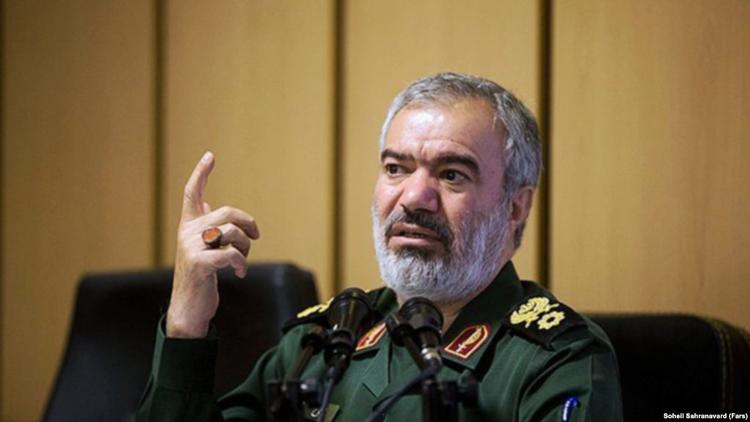 ( RFE/RL) – Iran has spent nearly $20 billion pushing its controversial foreign policy objectives in the region, the deputy commander of the Islamic Revolutionary Guards Corps (IRGC) said in an interview on state television.

Speaking to state TV channel Ofogh on September 26, Ali Fadavi said Iran had spent $19.6 billion on the 1980-1988 war with Iraq while adding that the cost for Iran’s regional policies — on such things as proxy armies and military aid in countries like Syria, Iraq, and Yemen — was less than that.

He added he could not remember the precise amount.

But Fadavi, the second most senior commander in the IRGC, said those billions were insignificant compared to what Iran had gained in the region.

“From the beginning when we got involved in the [so-called] Resistance Front, how much do you think we spent? The numbers are very low, a lot less than the war but the results [have been significant].” he said.

The rare estimate on how much the IRGC spent supporting regimes and factions in nearby countries was far less than figures cited by other sources.

Lawmaker Heshmatollah Falahatpisheh, for example, was quoted by Iranian media in May as saying Iran might have spent between $20 billion and $30 billion just on its involvement in Syria where Iranian-backed forces and militia have propped up the government of Syrian President Bashar al-Assad.

It’s not possible to verify such figures due to the secrecy of most IRGC expenditures and because Iran does not reveal the cost of its support for regional proxies aimed at expanding its influence in the region and countering its rival, Saudi Arabia.

Iran’s support for those paramilitaries, including the Lebanese Hizballah, has been a source of anger for some Iranians particularly when economic mismanagement and crippling U.S. sanctions have led to the free fall of the national currency and skyrocketing prices that make life extremely difficult for many people.

During recent antiestablishment demonstrations, protesters chanted “Leave Syria, think of us,” and “No to Gaza, no to Lebanon, I sacrifice my life for Iran.” The chants highlight the frustration people have with Iran’s support for those regional armies and the aid it provides to Syria.

Iran’s use of proxies has also been a talking point by the administration of U.S. President Donald Trump against the clerical establishment, accusing Tehran of stealing resources from the Iranian people to create instability in the Middle East and support terrorist groups.

The U.S. State Department said in 2018 that the Iranian establishment has spent “$16 billion propping up the Assad regime and supporting its other partners and proxies in Syria, Iraq, and Yemen since 2012.”

The report also said Iran funds Hizballah to the tune of $700 million annually and gives a further $100 million a year to Palestinian groups such as Hamas and Islamic Jihad.

When Fadavi was asked about the chants of protesters against Tehran giving such aid to countries in the region, he appeared to suggest that they’re unimportant in the face of what he described as the “victories and greatness” Iran has achieved through its policies being implemented.

In separate comments, General Rahim Yahya Safavi, a military adviser to Supreme Leader Ayatollah Ali Khamenei, who served as IRGC commander, said Iran will support any “Muslim or non-Muslim country” that will ask for its help, adding: “but we will take money from them.”

Iranian officials have suggested that despite Washington’s campaign of “maximum pressure,” which has brought unprecedented problems to the Iranian economy, they are not ready to give up their support for proxies.

The IRGC’s external Quds force, whose chief Qasem Soleimani was killed in a U.S. drone attack in January, is believed to have played a major role in expanding Iran’s regional operations.

“For every assistance we provided to the Iraqis we received dollars in cash,” Safavi said in a September 27 interview with the semiofficial Mehr news agency. “We signed a contract with the Syrians in exchange for certain things, of course the Russians will [benefit] in Syria more than us.”

He also confirmed earlier media reports that Tehran had received gold for sending fuel to Venezuela, which has also been targeted by U.S. sanctions.

“We gave gasoline to Venezuela and received gold bars [in payment]. We brought the gold to Iran in a plane so that nothing would happen to it,” Safavi said.

Fuel Shipments To Venezuela Hailed In Iran As ‘Humiliation For America’

The two countries have forged close bilateral relations due to their shared problems with Washington.

“Venezuelans are communists, but they stood up to the Americans and we are helping them, giving them software, and giving them ideas such as how to mobilize people and how to repel cyberattacks,” he said, without providing details.