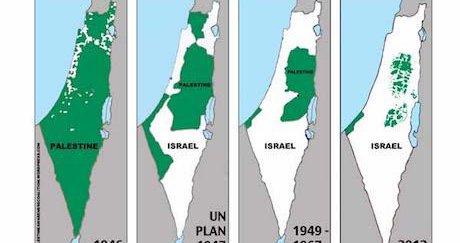 ( Middle East Monitor ) – US Ambassador to Israel David Friedman has left no doubt about the rationale behind the recent normalisation agreements with Arab states, praised by the international community as an opportunity to kick-start negotiations about the two-state compromise. In the background, the UAE’s lauded diplomacy, which postponed the annexation process and was hailed as an achievement for the Palestinian people, has served its purpose to normalise the next step.

“When we feel we’ve exhausted these efforts,” Friedman declared with reference to encouraging more countries to normalise ties with Israel, “of course we will help Israel formalise its boundaries, including communities in Judea and Samaria [the occupied West Bank].” He described the Arab League as “made up of potential normalisation partners.”

In words reminiscent of Israeli Prime Minister Benjamin Netanyahu’s, Friedman reiterated that the annexation of occupied Palestinian territory was neither cancelled nor abandoned, but suspended. “To suspend is by definition temporary.”

Now that the international community has a clear view of what it tried to spin as a diplomatic breakthrough, perhaps the Palestinian Authority can stop scrambling for support from the UN, which encourages the inevitable illegal annexation while pretending to oppose Israel’s colonial settlement expansion. A merging of what the two-state compromise and US President Donald Trump’s deal of the century seek to achieve is what the international community seems to be aiming for, even if this is promoted through different paradigms.

Friedman was addressing the Kohelet Policy Forum online conference, in which Netanyahu also participated, pointing out that the normalisation agreements indicated Israel’s power in the region. “Global superpowers said concessions will bring peace and peace will bring security,” Netanyahu argued. “This dangerous plan, if it were to happen, would make Israel vulnerable and weak.”

Yet Israel exerts enough influence upon world powers to ensure that it is not left vulnerable, and the concessions Netanyahu spoke of were never incumbent upon Israel, which has never made any. Reprimands are not concessions, and neither is the two-state compromise a concession, given that it allows Israel to decide the fate of the indigenous Palestinian people and their land. Without political recognition of the Palestinian right of return, all the concessions Netanyahu speaks of are Palestinian losses, and annexation will merely formalise the colonisation process that the international community has tacitly supported under the guise of the two-state imposition.

Israeli settlements and annexation are both violations of international law. The normalisation deals are being used by the US and the international community to shift focus back to the diplomacy that caters for Israel’s demands. From March to August this year, Israel increased its destruction of EU-funded Palestinian structures, yet the EU has not spoken out against the hypocrisy of “suspending” annexation simply to secure adequate consensus for what is an illegal act. Likewise, the UN only spoke of opportunity in terms of diplomacy, while invalidating the rights it purportedly stands for.

Peace – the term favoured by the international community – is an Israeli conjecture. What Israel defines as peace, namely increased militarisation in the name of security, ties the loose ends of the colonial project together. If the international community does not oppose annexation politically, and if the PA continues to insist on applying defunct and exploitative policies to allegedly advance the Palestinian cause, the underlying message is nothing less than an endorsement of Palestine’s complete disappearance.