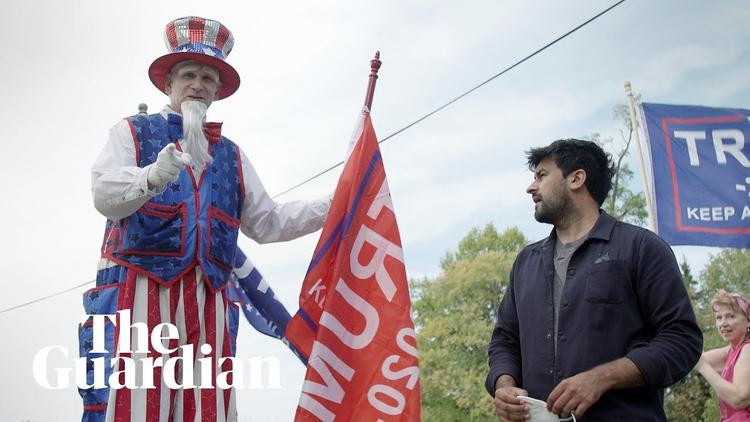 1. Environment. This is the biggest single issue. Trump is a real-life world-destroying Thanos from the Avengers, and is trying his best to commit planeticide. His policies will kill the earth. The human race has a window of about 20 years to avoid the worst impacts of the climate emergency. We should have swung into action years ago to vastly reduce our use of coal, gasoline and natural gas. Trump has presided over an increase in our annual carbon dioxide emissions rather than, as he should have, greatly reducing them. If Americans give him another four years to wreak this kind of destruction, it will be game over for normal human life on the planet. We will see gargantuan disruptions, with turbocharged hurricanes, massive wildfires, raging sea level rise, coastal flooding, and mass extinctions. These disasters can be light or heavy. Trump is doing his best to ensure they are heavy.

Trump has promoted coal burning, the dirtiest fossil fuel and the one most deadly to the health of the earth’s climate.

Trump has tried to remove fuel efficiency standards for US automobiles, which would mean the US would have to import more expensive petroleum and would emit more carbon dioxide, a dangerous heat-trapping gas currently wrecking the planet. Trump keeps saying the US is energy independent. It isn’t. Trump imports millions of barrels of petroleum every day. He seems to be trying to get a better price for his Saudi buddies, which would come out of the pocket of the US consumer.

2. Trump’s second biggest failure was in dealing with the coronavirus pandemic. For the most part, he adopted an ostrich policy of burying his head in the ground and pretending that it wasn’t there, or would abruptly disappear “like a miracle,” or that its consequences were not grave.

Few other industrialized democracies had as poor a record of government inaction on the pandemic as the United States. South Korea and even Japan ran rings around the Trump response. South Korea has 124 cases a day at the moment, with a total of 466 deaths since February. Multiply those numbers by roughly 6 to get an idea of what they would look like in the US, which has a much bigger population. Trump doesn’t have 3,000 deaths. Trump has had at least 230,548 deaths, and the number is likely closer to 300,000 because a lot of the elderly poor die in their beds without being diagnosed. Germany? 10,530. Multiply that by four to get its US equivalent. 41,120 is not the same as 230,548. Trump has failed, and the measure of his failure is the deaths. Not to mention the 9.4 million Americans Trump has allowed the coronavirus to sicken. Many of them will have long term respiratory or major organ problems.

Trump has had a hundred times as many deaths as South Korea. Trump did not do the things South Korea did– near universal mask wearing, development of rapid tests and provision of government contact tracers, zeroing in on hot spots and quarantining those involved. He was advised to do those things by the Centers for Disease Control. He refused. He did not want to spook the stock market, because he knows his real base is the rich and the upper middle classes, and they would not forgive him a bad stock market. So, Trump appears to have decided to let grandma die.

3. Trump’s failure on the coronavirus is also a failure on the economy. China dealt with the pandemic in a scientific way, and is now past the crisis. It will grow 1.2 percent this year, whereas US GDP will be in negative territory. Trump blames governors’ shutdown orders for harming businesses. But even when there is no shut down, people are chary of eating indoors at a restaurant. Ben Kesslen at CNBC reports,

“The food service industry is on track to lose $240 billion in revenue this year. In an industry that accounts for around 2.3 million jobs, 1 in 6 restaurants (or about 100,000) have closed permanently or long term, and 40 percent of operators don’t expect to make it through February without more federal relief, according to the National Restaurant Association.”

Kesslen notes that not only are customers afraid to dine in close spaces, but many have seen reduced income and are not in the mood to buy a nice meal out.

South Korea didn’t shut down because it didn’t have to, and people there aren’t afraid to go shopping. Because Moon Jae-in is an infinitely better president than Donald Trump is.

In August, South Korea’s unemployment rate was 3.2 percent. That is what you can do when you get a handle on the pandemic.

4. Health Care. Trump has tried to kneecap Obamacare, which had allowed an extra 22 million Americans to afford health care insurance. Trump has undermined the program at every turn. He is presently in court attempting get rid of the Affordable Care Act entirely. He has also consistently challenged the requirement that insurers insure people with pre-existing conditions. Trump brazenly lies about his opposition to health care for people and his attempt to get rid of the provision about pre-existing conditions. But you have to look at what he does, not what he says. What he has done is to sue to get rid of them and to get rid of the ACA. He lies and says he has a better plan in mind, but the Republicans have had a decade to produce an alternative and they never have given us a bill to examine.

5. Under Trump, the US trade deficit has climbed 14% from where it was in Obama’s last year. It skyrocketed with China, but then Trump used tariffs (paid for by Americans) to wrestle it back down to just about where it was in 2016. It then just grew with other countries.

I observed a couple of months ago, “Trump has not brought back manufacturing jobs. At all. Last fall, Industry Week reports, manufacturing fell to 11 percent of US gross domestic product, the lowest since 1947 and lower than any year of the Obama administration.”

Michael Sainato at The Guardian reports that Trump lost nearly 1800 factories.
He adds,

“On the day Trump was inaugurated, 20 January 2017, GM cut 2,000 jobs at its Lordstown plant in Ohio. The next year General Motors announced it would shut down its Lordstown plant for good as part of a plan to cut another 14,000 jobs in the US. The news came even as GM received a tax windfall of $157m in the first three months of 2018 due to Trump’s tax cuts, which Trump and the company had praised as a job creator.”

“In 2019, the number of manufacturing jobs in Michigan, Ohio, Wisconsin and Pennsylvania fell by 0.5 percent, according to a report by Michael Shields, researcher at Policy Matters Ohio and Andrew Stettner, senior fellow at the Century Foundation. With the onset of the coronavirus pandemic, 381,000 additional manufacturing workers in these states were laid off or furloughed. Two auto plants in Michigan have closed since 2017, with a third on its way out (the Romeo engine plant where Krzysiak got his start). “Trump doesn’t give a rat’s ass about manufacturing workers,” says Krzysiak. “He got elected and [spent] the last four years undercutting workers’ abilities to organize, make a decent wage, and [maintain their] job security.”

Trump’s 2017 tax break for corporations and the wealthy has encouraged them to move further offshore, taking jobs overseas.