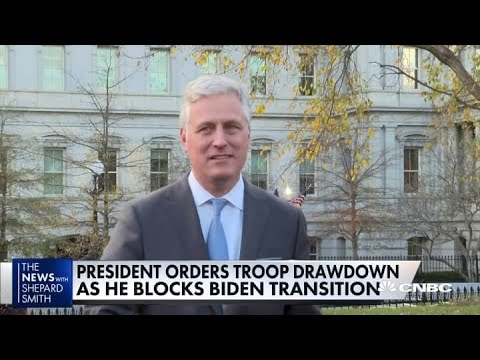 Ann Arbor (Informed Comment) – Dustin Jones at NPR reports that Trump has instructed the Pentagon to bring most US troops home from Iraq and Afghanistan by January 15, 2021. Some 2,500 would remain in each country. The announcement was made, WaPo reports, by acting secretary of defense Christopher C. Miller. Miller was apparently brought in to replace Mark Esper because Esper opposed this move.

There is, however, something passing strange about this announcement. National Security Adviser Robert O’Brien is quoted as saying that the plan is for all of them to be out by May. Miller also referred to this prospect in his remarks.

Trump, however, won’t be in office after January 20, whatever he may think, and so that decision will be Biden’s. Why leave 2,500 in each country. Why not withdraw them all if that is the goal?

There are only 3,000 US troops left in Iraq, after Trump initiated a feud with the country’s Shiite national guard in January by killing the leader of the Party of God Brigades, Abu Mahdi al-Muhandis, with a strike on Baghdad International Airport that also killed Gen. Qasem Soleimani of Iran. Thereafter the Shiite militias in Iraq and the US military conducted a series of tit for tat attacks on one another. The Iraqi Parliament demanded that the prime minister initiate measures to expel US troops from the country. Prime minister Mustafa al-Kadhimi has slow-rolled this demand but is said to stand by the parliament’s decree in private.

This summer, Iraq and the US military reached an agreement to reduce US troop strength from 5,000 to 3,000 by September. So Trump is in fact only bringing 500 US troops out of Iraq.

The powerful Shiite militias, who were recognized by Iraq’s parliament as a sort of national guard in 2018, want them all gone, and fired rockets at the US embassy in the Green Zone on Tuesday.

MP Karim Alaiwi, who serves on the Security and Defense Committee in the Iraqi Parliament, denied that the US withdrawal would harm Iraqi security. A member of the Fatah Bloc, comprised of hardline Shiite party-militias of the sort Trump bombed last spring, Alaiwi said that the US covertly supports terrorism in Iraq. His views are not widely shared in Iraq, but are held by a minority of Shiites.

As for Afghanistan, President Obama had attempted to get out entirely in 2013 and 2014, and then in 2016 announced he would keep 8,400 troops there through the end of his term, saying that a final withdrawal would be up to his successor. The problem of Afghanistan for presidents is that if you bring all the troops out and then the Taliban take the capital of Kabul the next month, you have egg on your face. This would be bad for your party’s reelection chances.

Maybe I’m reading too much into this, but we know that Trump and his aides are doing whatever they can to sabotage the incoming Biden administration and to prepare for a 2024 Trump run for the presidency.

Maybe Trump wants to be able to tell his 70 million acolytes in 2024 that he got the US out of Afghanistan and Iraq almost entirely, but then Biden came in and screwed things up.

If Biden is the one who withdraws completely from Afghanistan and then Kabul falls, it will be the Democrats who have egg on their faces. If Biden puts the number of troops back up to 5,000, then Trump can say that Biden dragged us back in to fruitless Middle East wars. He is convinced that those wars have become unpopular with the white working class. Some 43% of households with a union member voted for Trump in November, according to exit polls. Only about ten percent of the US work force is unionized, however. Most workers vote Democratic, and most of Trump’s support was from the better-off segments of the population. Still, he did win in 2016 by getting about 14 percent of the white working class that had voted Obama to shift to himself.

When Biden was vice president, he opposed Gen. David Petraeus’s big think plan for a huge “counter-insurgency” effort in Afghanistan, preferring a small special operations force that would concentrate on counter-terrorism. That is, when you had a small attack or bombing somewhere by 16 people, you’d go in after them. Biden lost that one, and in 2010 we had the Marja Farms and Qandahar campaigns, which had no long term impact and which no one now even remembers. My guess is that Biden will revive his small-scale counter-terrorism plan, with the Afghan National Army in the lead, and that 2,500 US troops would be enough back-up.

As with all things Trump, finding a firm policy rationale in his erratic pronouncements is almost impossible. But that he is trying somehow to shore up his own reputation and at the same time to sandbag Biden is always plausible.