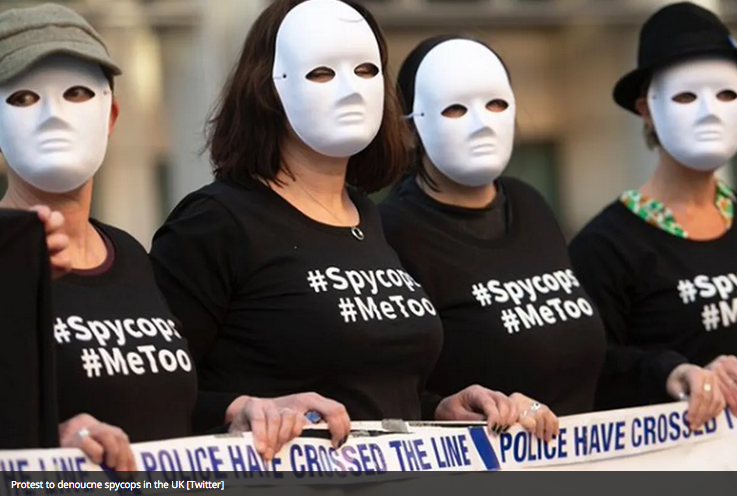 ( Middle East Monitor) – This week the Undercover Policing Inquiry [in Britain] finally got underway, albeit in an unusual, coronavirus-restricted virtual fashion.

There has been a delay of more than five years since it was first formally announced by then Home Secretary Theresa May.

The inquiry is investigating the deployment of undercover police officers in campaigning political and activist groups, especially by two specific units – the Special Demonstration Squad (SDS) and the National Public Order and Intelligence Unit (NPOIU).

They were, in effect, Britain’s secret political police forces, which for decades spied on almost the entire gamut of the political left – as the important Undercover Research Group database shows.

As we’ve been hearing during the inquiry this week from lawyers – they engaged in spying on legitimate and peaceful political campaigners on an industrial scale.

These were not police informants inside political groups. These were trained, uniformed police officers, who took off their uniforms and grew their hair and beards when joining the SDS in order to fit in with the activist “scene”.

They led double lives, presenting themselves as activists by day, while often going home to their wives and families by night.

Many even had long-term sexual relationships with the female activists on whom they spied – without the knowledge of their wives, who thought their husbands had been spying on terrorists and criminals, not environmental campaigners.

Counsel for the inquiry opened on the first day with a lengthy statement explaining the history of the SDS, and how it was set up in 1968 specifically to spy on the Vietnam Solidarity Movement, and the demonstrations that were called that year outside the US Embassy, then in Grosvenor Square in central London.

David Barr QC showed a short segment of old Pathé News footage, provided by the ITV archive, which showed the scene from that day in October 1968 when there was a large anti-war demonstration.

To me, it showed quite a familiar scene: the police attacking a peaceful protest, seemingly provoking some protesters to push back. It looked like a police attempt to start a riot. But the newsman’s voiceover sounded like a relic of 1940s war-time propaganda.

It even claimed the protest was the bloodiest riot ever seen in Britain (something of an exaggeration, to say the least).

Barr’s history, along with the reams of documents finally published by the inquiry that first day, tell a story of how the SDS was founded. Although it initially had a narrow remit of spying on a specific series of anti-war demonstrations, praise for the SDS by MI5 led the Home Office to agree to fund the new spycops unit on an ongoing basis – and expanding the range of groups on the left they massively targetted.

SDS annual reports from the early years now released by the inquiry (albeit in redacted form, despite being decades old) show that the SDS – despite the Metropolitan Police’s latter-day claims to be politically neutral – at that time infiltrated only left-wing and “Irish related groups” (solidarity groups opposed to the British occupation of Northern Ireland, such as the Troops Out movement).

Barr also stated that, in the earliest years, there was no evidence of the SDS targeting any right-wing group at all. Although the spycops in later years did target a few right-wing groups (including the dangerous racists of the BNP and the violent extremist Combat 18), a look at the database shows, aside from the violent far-right, the groups were almost entirely left-wing: environmental, anti-war, trade unionist, socialist and anarchist, animal rights and anti-racist groups.

Some of the thousands of groups and individuals to be targetted included the Anti-Apartheid Movement, the National Union of Students and even the campaign for justice for Stephen Lawrence – the murdered Black teenager whose death in 1993 the police practically refused to investigate, exposing institutional racism at the heart of the Metropolitan Police.

The groups stretched from anarchist and communist groups to even the left of the Labour Party, with left-wing MP Diane Abbott and left-wing former MP and Mayor of London Ken Livingstone both being core participants to the inquiry.

In the context of this milieu, and with the net being cast so wide, it is reasonable to ask, then, did the spycops spy on Palestine solidarity groups? Evidence released by the inquiry shows the answer is yes. But to what extent?

It’s at this point that I have to declare an interest: the spycops spied on me too. I am one of the hundreds of core participants to the inquiry, and have lawyers representing me, along with two of my old activist comrades.

In my mid-to-late twenties, I was an activist with the International Solidarity Movement (ISM), a group which sent non-violent volunteers to occupied Palestine to stand in solidarity with Palestinians against Israeli occupation forces and violent, racist settlers.

At the end of 2018, the inquiry revealed that ISM London had been infiltrated by the SDS. The spycop’s real name has still not been revealed to us, but we knew him at the time as Rob Harrison.

Between 2004 and 2007, he infiltrated ISM London – and he did so quite successfully.

We were not the only Palestine solidarity group to be spied on in this way. The inquiry revealed in documents released this week that a group they called the Palestine Solidarity Campaign was also spied on in the early 1970s – although it is unclear yet if they were directly infiltrated in the same way as ISM London.

When I informed the PSC about the new document released this week, they told me that something was off, because they were not founded until 1982.

However, I’ve been informed by Tony Greenstein – a veteran Palestine solidarity activist involved in the PSC’s foundation in 1982 – that there was indeed an earlier group with the same name, which he knew little about and which floundered before sputtering out.

It seems to have been this group that was spied on by the SDS – though to what extent, we have yet to be informed.

The Undercover Policing Inquiry will be ongoing for some years to come – stay tuned.