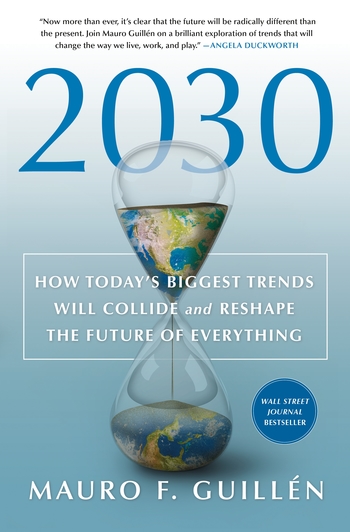 Guillén is the Zandman Professor in International Management at the Wharton School of Penn and an expert on global market trends. This book has eight chapters, a conclusion, and a Postscript on the impact of COVID-19 on trends in 2030. This book acts as a roadmap to navigate the next decade, since today’s world will change by 2030. The world is changing so fast that folks are nervous about what the future has in store for all of us. One of the biggest changes by 2030 will be technological ones, such as 3-D printing, artificial intelligence, and nanotechnologies.

Technology will generate creative solutions but also create problems, e.g., as a result of autonomous vehicle technology about three million truck drivers may lose their jobs. Autonomous vehicles have a bright future since a computer can adapt to road and traffic conditions, and figure out a complex trip. A single robot in the manufacturing section can displace five to six workers. By 2030 there will be more robotic arms than human ones, more computers than human beings, and more sensors than eyes. Artificial intelligence (AI) can perform tasks that human brains do, such as make decisions, recognize speech, and utilize visual perception.

Today, it takes about a decade of higher education and years of training to become a first-rate surgeon. Yet in 2016, the Smart Tissue Autonomous Robot (STAR) used its own intelligence, tools, and vision to stitch together the small intestine of a small pig. It did a better job than human surgeons who had the same task. The robot’s stitches were more consistent and less resistant to leaks than the sutures of the human surgeons. And an added bonus: robots are neither temperamental nor judgmental.

New 3D printers can create a three-dimensional figure or object by printing very thin sheets in sequence. They then stack them on top of each other to create a three-dimensional shape. By using only the exact amount of material needed to make a dental piece or human replacement tissue, waste is reduced. Less carbon will be put into the atmosphere as fewer goods are made with less material. The clincher is this: companies will need much less shipping as mini-factories and printer farms are constructed that are closer to customers. Companies are learning to manufacture items to real-time demand, instead of storing their supplies in warehouses since freight transportation makes up 25% of all carbon emissions in affluent nations.

Cities can use 3-D printed seawalls to counter flooding and storm surge. The company, Branch Technologies, uses Cellular Fabrication (C-FABTM), that is, industrial robots, complex algorithms, and freeform, extrusion technology that allows material to become solid in free space. This same company is perfecting a new construction product that’s stronger, lighter, faster on-site and with ten times greater design freedom using a waste-free process. This company built the largest 3-D structure in the world, viz., a bandshell at a park in Nashville. China uses 3-D printing to print entire homes that may aid in recovering from natural disasters like earthquakes and cyclones.

Nanotechnologies can go a long way in arresting climate change. The clothing industry accounts for circa eight % of total carbon emissions. Nanotechnologies can design particles as small as one billionth of an inch manufacturing cheaper, stronger, and more environmentally friendly materials that are programable, i.e., material endowed with the capability of changing their shape, conductivity, density, or optical properties in response to sensors. Researchers have discovered a material that tightens in cold weather to provide warmth and yet provides relief from heat in summer. We now have nanomedicine. We can deliver drugs to cancerous cells with enormous precision. Nanotechnologies can detect ovarian cancer when the disease is affecting one hundred cells. Nanorobots are able to be programmed to transport molecular payloads and cause on-site tumor blood supply blockages that can lead to tissue death and shrink the tumor.

Women in the US, Europe, and East Asia are having fewer children yet there’s a baby boom in Africa. Its population of 1.3 billion people will grow to 2 billion by 2038. One might surmise that Africa couldn’t survive such a growth in population, but that’s not the case. The landmass of Africa is humongous, i.e., about as big as India, China, Japan, the US plus Western and Eastern Europe combined. Will Africa be able to feed its increased population? The World Bank says that by 2030 Africa’s agriculture may well become a trillion-dollar sector, thus transforming the entire global economy.

Though today Africa imports food, its positioned to become an agricultural and industrial revolution. It must cultivate 500 million acres of land that’s about the size of Mexico, while greatly improving productivity by growing and processing a vegetable named cassava the third chief source of carbohydrates after rice and maize in the developing world. Over 300 million people in sub-Saharan Africa use cassava for their daily dietary needs since it contains less sugar than wheat.

This is a remarkable book, one that I cannot do justice to in a short article. The author has certainly done his homework in writing this book, e.g., it contains 27 pages of notes that enlighten the reader. I have difficulty praising this book too highly.