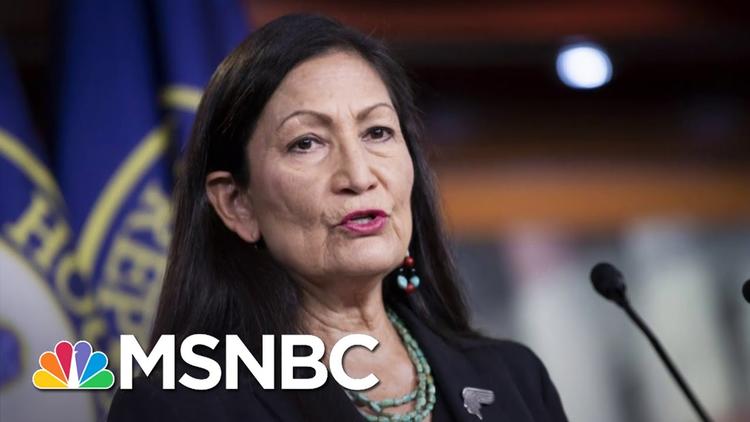 Ann Arbor (Informed Comment) – Rep. Deb Haaland (D-NM) will be president-elect Joe Biden’s nominee to head the Department of the Interior. She is the first Native American to head the department, and her appointment is full of ironies. The Department, formed in 1849, includes the Bureau of Indian Affairs and has a long history of abusing and cheating American Indians (that is what most of them in the US prefer to be called).

Donald A. Grinde, Jr. writes that in 1851, the then secretary of the interior Alexander H. H. Stuart said that American Indians were “encompassed by an unbroken chain of civilization . . and the only alternatives left are, to civilize or exterminate.” Historian Frederick Jackson Turner declared the frontier over in a famous address to the American Historical Association in 1893, but Stuart appears to have backdated it to mid-century. Stuart also exemplified the frankly genocidal mindset of the white elite of the US.

The Department of the Interior saw the some half a million Native Americans left after European pandemics and genocides had ravaged them as in need of a European-style education and instruction on how to farm. Professor Grinde points out that Native Americans had plenty of culture, it was just oral and was discounted by the whites:

“Elders as well as people knowledgeable about specific ideas and techniques instructed members of their societies about a broad range of topics including his- tory, religion, arts and crafts, literature, geography, zoology, botany, medicine, law, political science, astronomy, soil science, and theater.”

They were stewards of North America for thousands of years and they didn’t mess it up with fossil fuels, global heating, chemical pollution and micro-plastics.

American Indian boarding schools were set up to separate children from their families and cultures and indoctrinate them in white ways, teaching them that their own religion and culture was inferior.

Despite the First Amendment guarantee of freedom of religion, the federal government interfered with and demeaned the practice of Native American religion as “heathenish” and federal boarding schools actively proselytized for Christianity.

“In response, Price promulgated a set of rules that became known as the “Code of Indian Offences.” These outlawed many traditional Native-American religious practices. It established a Court of Indian Offences and outlawed “the sun-dance, the scalp-dance, and the war-dance,” and associated activities. Participation in such activities would lead to withholding of rations for 10 days. A second offence would result in withholding rations for up to 30 days, or incarceration for up to 30 days.”

It was not until the 1970s that Native American religious practice was recognized as legitimate by Congress.

Since the Republicans in Congress nowadays are so het up about protecting religious sensibilities even at the expense of other civil liberties, maybe they’d like to apologize for their forebears’ assault on Native American religion?

The Department of the Interior was also supposed to oversee hundreds of treaties made between the native Nations and the US government. Corruption and arrogance led to many of those treaties being broken by the whites, writes Sarah Pruitt at History.com.

The US government organized the Great Sioux Reservation on the territory of and around the Black Hills of Dakota. The Sioux and Arapaho people had exclusive rights to it (the Sioux include the Dakata, Lakota and Nakota).

But then gold was found in the Black Hills, and there was a white gold rush, and they were essentially stolen from their rightful owners despite the treaty. That was what caused the Battle of Little Big Horn in 1876.

In the 1970s, the Supreme Court offered the Sioux $100 million in reparations for their loss of the Black Hills. The tribe rejected the offer, Pruitt writes, saying that the hills are sacred and were never for sale.

In 2017, Trump signed an order much reducing the size of the Bears Ears national park, endangering American Indian heritage and burial sites and provoking a lawsuit from the latter. Trump was the true heir of Alexander Stuart and Hiram Price.

I don’t think we really recognize the true historical significance of Deb Haaland heading the department of the interior. Here is an opportunity for rethinking policy toward the first Americans, and for forms of healing and restitution.