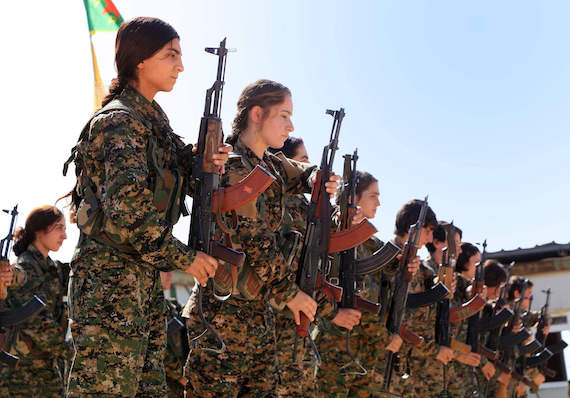 Major global actors in the Middle East are traditionally using the Kurds as bargaining chips for their own geopolitical trade. Russia is no exception. The Kurds of northern Syria could soon “fall victim” of the Russo-Turkish lucrative deals.

Moscow has reportedly recently asked Syrian Democratic Forces (SDF) – an alliance composed of Kurdish, Arab, and Assyrian militias, in which the Kurds predominate – to leave control of Ain Issa town in the north of the country to the Syrian Arab Army (SAA) in order to prevent a potential Turkey’s military operation in the region.

Turkey-backed militants, on the other hand, have announced preparations for an offensive on Ain Issa, in the area where Russian bases are located. According to reports, local Kurds are protesting in front of the Russian military facility, demanding from Moscow to intervene and stop Turkish aggression on the region.

The Kurds are again caught between two fires. They already found themselves in a very similar situation in 2018 when Turkish Armed Forces and the Turkish-backed Free Syrian Army launched a military operation Olive Branch against Kurdish militias in Afrin District in northwestern Syria. Since the Kurds could not count on the American or Russian assistance, they were forced to abandon Afrin after two months of heavy clashes.

“We had certain arrangements with Russia. But Russia suddenly disregarded these agreements and betrayed us. They have clearly sold us out”, said Sipan Hemo, the People’s Protection Units (YPG) commander in January 2018.

In November 2019 the Kurds felt betrayed by the US, since President Donald Trump unexpectedly agreed to withdraw American forces from areas along Syria’s border with Turkey. Such a move was seen in Ankara as a green light for Turkish invasion. Eventually, the Kurds had to make arrangements with Russia-backed Syria’s President Bashar al-Assad in order to prevent further Turkish gains. Has the time come for the Kurds to agree on Russia’s terms and conditions on Ain Issa?

If the SDF fighters do not hand over the town to the SAA in the near future, Moscow and Damascus will likely “express grave concern” over Turkish actions in the region, but will do nothing to prevent Turkey-backed militants from capturing Ain Issa. After Ankara successfully completed its operation in Nagorno-Karabakh, it is now looking for an excuse to start another intervention in its zone of influence.

The Kurds are certainly an easy target. Ain-Issa – situated to the east of the Euphrates River at the junction of routes connecting Qamishli to the east, Raqqa to the south, Kobani to the northwest and Manbij to the west – is an interesting point for the Turks because it allows them to take control of the strategically important M-4 highway. However, if the Kurds surrender to the Syrian Arab Army, Russian military will likely be deployed north of the town, and additional SAA forces will be deployed in the city to prevent any potential Turkish incursions in the region. In other words, if the Kurds find a common language with Damascus and accept the conditions of Russia, any attempts of the Turkey-backed militants to storm Ain-Issa could lead to a potential confrontation with the Syrian Arab Army that would be supported by the Russian Air Force.

From the Russian perspective, if the SDF refuses to hand over the town to Assad, it will be another evidence that the Kurdish leadership still relies on Washington, which means that the Kurds do not deserve Russian trust. Both Russia and its frenemy Turkey see the Syrian Kurds as a long hand of the United States in the northeast of the country, and also as an obstacle for achieving their own long-term interests in the region. Moreover, some Russian analysts claim that the Kurds blame anyone for what is happening, but not themselves.

As Nikita Isaev, director of the Kremlin-close Institute for Current Economic Research, pointed out in October 2019, “now that everyone has turned away from the Kurds, they will be able to count only on the active neutrality of Russia”. Namely, the Kremlin aims to portray Turkey as a bad cop, Assad as a good cop, and the Russian Federation as a mediator.

Still, some Kurdish leaders are quite aware of the Russian role in the region. Hushan Darwish, a member of the Democratic Syrian Assembly in Iraqi Kurdistan, said that “Russia is responsible for what happened, since it is the guarantor of the ceasefire.”

Indeed, if the Turkey-backed forces manage to capture Ain Issa, the project of an independent Syrian Rojava will likely be doomed, which means that, at this point, an alliance with Damascus could be the lesser of two evils for the Kurds in northeastern Syria. “A bird in the hand is worth two in the bush” is a message that RIA FAN, a Russian news agency based in St. Petersburg, is sending to the Kurds.