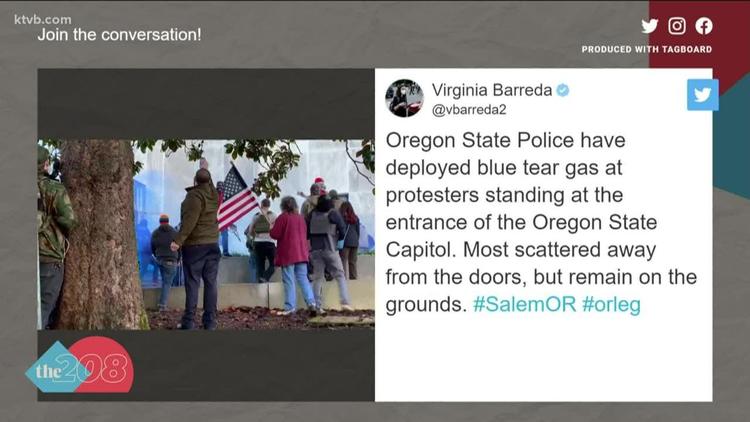 Ann Arbor (Informed Comment) – Far right brown shirts, some armed with firearms or bear mace, invaded the Oregon state house in Salem on Monday. Most of them maskless and posing a pandemic danger to the state senators, they sought by threats of force to make the legislature lift covid-related restrictions. Journalists were assaulted, with one shoved and another tackled to the ground. covering the special session of the Oregon law-makers. When police declared an unlawful assembly and moved in to clear the thugs out, some were sprayed with bear mace. The white supremacists broke windows and kept trying to get in even after police cleared the initial invaders. So report Lauren Dake and Dirk VanderHart at Oregon Public Broadcasting.

Remember how forced-to-resign Attorney General Bill Barr had federal authorities arrest 200 Black Lives Matter protesters in Portland, Oregon last summer? Or his allegation, and that of Trump, that a shadowy nation-wide organization called Antifa (i.e. anti-fasists) was stirring unrest and destroying property in cities across the land? An allegation shot down by the FBI.

Or then there was that time that defeated vice president Mike Pence proclaimed that a Department of Homeland Security officer at a federal building, Dave Patrick Underwood, was “shot and killed during the riots in Oakland, Calif.” Pence was trying to give the impression that Black Lives Matter protesters killed Underwood, and perhaps he succeeded. He is, however, a monumental liar. Because Underwood was assassinated by a member of the white supremacist, pro-Trump “boogaloo” movement who allegedly “came to Oakland to kill policemen.”

So can we expect Barr and Pence to swing into action and charge Patriot Prayer members who rioted in Salem with sedition, sending federal agents in to whisk them away in unmarked vehicles?

This is not only because the armed and violent riot was staged in a state facility. It is because Barr and Pence have worked as a constituency the ten percent of Americans who favor white nationalism, and their crimes don’t bother Trumpies. White people, in their view, don’t pose a danger to the state, by virtue of being white.

The Oregon law requiring mask-wearing statewide as a covid prevention measure was protested by state senator Dallas Heard, who went out on the capitol steps and ripped his mask off. He denounced the mask requirement as a “campaign against the people and the children of God.” Maybe somebody could please primary this kook.

The far right protested that the state house in Salem was closed to the public because of the pandemic and said the public deserved to be heard during the special session. But some of them were from Idaho. And, last Thursday and Saturday the legislature opened for public comment. The state senate managed to pass restaurant relief and a measure to help tenants and landlords.

The elephant in the room — and it is a white elephant — is Trump’s own fascism, which has encouraged the supremacist militias to act out in this way. It was Trump who called on his storm troopers to “open Michigan” and to take direct action against state governments mandating covid mitigation measures. It was Trump who daily denounced journalists as enemies of the people, borrowing an old Nazi line about which some of his followers were less coy.

So if Barr is looking to lay sedition charges against someone in his last day in office, he could look closer to home than Oregon.