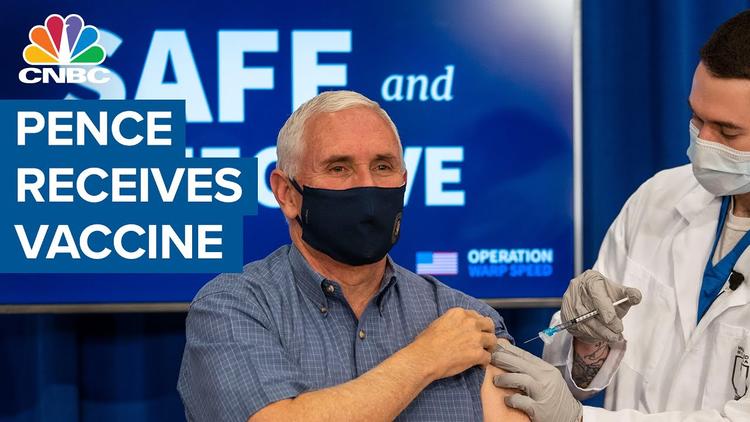 Here is why he is a hypocrite.

Pence served for four years in the Trump administration, which initiated a visa ban against Muslims. Although he had in 2015 called any such ban “unconstitutional,” he folded when Trump insisted on it and proudly stood behind the Mad President when he signed the order.

Pence has, further, improperly pressured USAID to route US foreign aid to the Middle East away from Muslims and to Christians instead.

Pence is a serial science denier. He says smoking cigarettes does not cause cancer. He has called the human-caused climate emergency “a myth.”

The Pfizer-BioNTech vaccine involves science and Muslim immigrants, so why is he getting it?

Pfizer partnered in developing the vaccine with a German firm, BioNTech, which was founded and is headed by the Turkish-German husband-wife team of Ugur Sahin and Özlem Türeci. BioNTech really developed the vaccine, though Pfizer is the one with the ability to mass-manufacture and distribute it.

The two are Turkish-German Muslims.

Türeci was born in Lastrup, Lower Saxony, in 1967 to an immigrant Turkish family. Her father was a physician working at a Catholic hospital. She jokes that she is the “Turkish Prussian.”

She is among the wealthiest 100 Germans.

Her husband, Ugur Sahin, was brought to Germany from İskenderun, Turkey, at the age of 4. His father worked in a Ford automobile plant. Ordinarily in the typical European education system, he would have been shunted off to a technical school, but he managed to get on an academic track, and excelled at chemistry. He was the archetypal nerd, working in the laboratory at college until all hours of the night, then bicycling back to his apartment.

He is now worth about $5 billion.

İskenderun was known as Alexandretta. It had been part of Syria but while France was occupying Syria after WW II, it had a special administrative position. France granted it and its district limited independence in 1937, and by 1939 it was incorporated through referendum into Turkey.

There are both Sunni and Alawi Shiite Muslims there.

Sahin and Türeci started Operation Light Speed to develop a vaccine against the novel coronavirus last January, and were the first to see their vaccine authorized.

“To my surprise, I recently read an extremely positive contribution by the conservative economist Hans-Werner Sinn about Turkish migrants. The article in the “Frankfurter Allgemeine” was entitled “An admirable success for our Turkish immigrants”. To be concrete, it was about the founders and CEOs of the company BioNTech, Uğur Şahin and Özlem Türeci. We owe to them the development of a vaccine against the coronavirus. “The success of Şahin and Türeci could jumpstart the resurgence of the German pharmaceutical industry … It also proves the benefits that an aging society like Germany can achieve through immigration.”

Hans-Werner Sinn appears to be an honest conservative. Mike Pence, not so much.