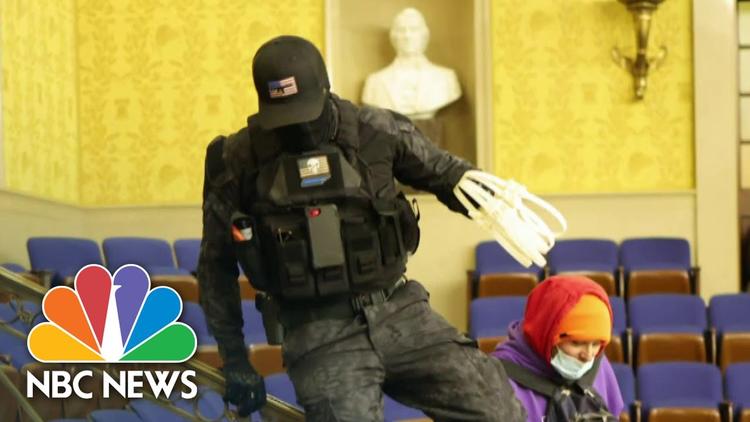 Ann Arbor (Informed Comment) – The far right militias, some of whom invaded the Capitol on 1/6, are now planning armed invasions of all 50 state capitols in advance of Jan. 20, according to the FBI, and are coming back for a second try at taking over the national Capitol. One reason Twitter kicked Trump, QAnon, and other undesirables off its platform was that they saw organizing for a Jan. 17 uprising.

These groups are what social scientists call “accelerationists.” They believe that through direct action and spectacles of violence they can increase the speed of polarization in society, fomenting a race war or at least a war between those who firmly support the cause of the white race and those who wish to diminish its prerogatives (as they see them). Some of them infiltrated last summer’s Black Lives Matter protests after the murder of George Floyd, engaging in violence and destruction as a false flag, hoping it would be blamed on African-Americans and that whites would then become alarmed and join them.

These elements on last Wednesday were trying to find and kill or kidnap Mike Pence and Nancy Pelosi, and perhaps other legislators, in hopes of igniting nationwide violence that would benefit them.

It can be a frighteningly effective tactic. Accelerationism, what I call “sharpening the contradictions,” was the tool that al-Qaeda in Mesopotamia and then ISIL used to take over 40 percent of Iraq. They have also had some success in pushing France to the far right and in damaging French traditions of civil liberties and tolerance.

The Southern Poverty Law Center analysis notes that adulation of Trump has given many of these disparate groups a common loyalty and orientation. In essence, they have become Trump’s private militia, like Mussolini’s black shirts. It is this loyalty to him, which he has cultivated (he called them “very special” on 1/6), that has endangered the Republic, since they are now determined to stop the inauguration of Joe Biden.

So who are these groups and what do they want?

There are about 940 distinct hate groups in the US, according to the Southern Poverty Law Center.

With the efforts of the odious Trump and his white supremacist cronies, members of these groups have infiltrated the US government.

“The Trump administration has installed members of hate groups into government—particularly those with anti-immigrant, anti-Muslim or anti-LGBTQ animus—and put in place highly punitive policies that seemed unthinkable just a few short years ago. These political moves will far outlast this administration, as Trump and his allies in the U.S. Senate have pushed through hundreds of new federal judges, many of whom are hostile to civil rights concerns and will serve for decades.”

About a dozen Capitol police are being investigated on charges of having collaborated with the insurrectionists.

Not all anti-government groups are organized on a paramilitary basis. They estimated that there are 181 militias. It was members of the militias who were dressed in military garb as they invaded the Capitol, and who appear to have contemplated violence against our elected representatives.

The SPLC has gathered information on 25,000 militiamen.

The capabilities of the militiamen have been vastly enhanced by the veterans of Bush’s Iraq and Afghanistan Wars, who have joined them in significant numbers and have brought with them tactical and firearms and explosives expertise.

Among the major militias are the Proud Boys: The Armed Conflict Location and Event Data Project or ACLED writes,

“The Proud Boys are a fascist youth movement oriented towards street-fighting. Their ideology is to ‘defend western chauvinism.’ The group is right-wing and anti-left in nature and has had several members convicted for violence. They were created by VICE News founder Gavin McInnes who has since backed away from the group (The Guardian, 22 November 2018). The Proud Boys rely heavily on jokes and silliness to downplay the group’s proclivity for violence, both threatened and real. The current de facto leader of the Proud Boys, Enrique Tarrio, is also the Florida director of ‘Latinos for Trump’ (CNN, 1 October 2020). The Proud Boys are evolving into a more militant organization. Groups of young men increasingly show up to Proud Boys events with rifles and plate carriers.”

“Three Percenterism is one of three core components within the antigovernment militia movement, along with the Oath Keepers and traditional militia groups. The reference to 3 percent stems from the dubious historical claim that only 3 percent of American colonists fought against the British during the War of Independence.”

“The Oath Keepers, another core component of the militia movement, was founded in 2009 by Elmer Stewart Rhodes, a veteran army paratrooper, Yale Law School graduate and former Ron Paul congressional staffer. It primarily recruits current and former law enforcement, military and first-responder personnel, though it also accepts civilians. Unlike Three Percenterism, Oath Keepers was conceived as an organization with hierarchical leadership at national, state and local levels, one committed to establishing a network of activists it hopes will lay the groundwork for the creation of state militias.”

Then you have the Boogaloo Bois, who are not so much an organization as a set of shared beliefs expressed online, and who have ruined Hawaiian shirts for me. They believe in an imminent race war, the Boogaloo, and are extremely violent. They use “big luau” for Boogaloo online to avoid NSA detection, and engage in other word play.

Benjamin Goggin and Rachel E. Greenspan write at The Insider:

“The loosely organized group of predominantly white men call themselves the Boogaloo Bois, a name that comes from the cult 1984 film “Breakin’ 2: Electric Boogaloo,” but morphed in online message boards and groups to reference a theoretical second US civil war and uprising against the federal government. Online, where almost all of their organization occurs, members have created numerous groups and pages under the names “big igloo” and “big luau” in an attempt to avoid censorship from tech platforms. The far-right group, born from 4chan’s /k/ board, which is dedicated to gun worship, has no firm central organization, and only has a loose collection of shared values.”

Law enforcement underestimated these groups on 1/6. They must not do that again, not on 1/17 or on 1/20. Trump has whipped them up with his endless lies about the election being stolen from him, and clearly he has put Joe Biden’s life in danger.