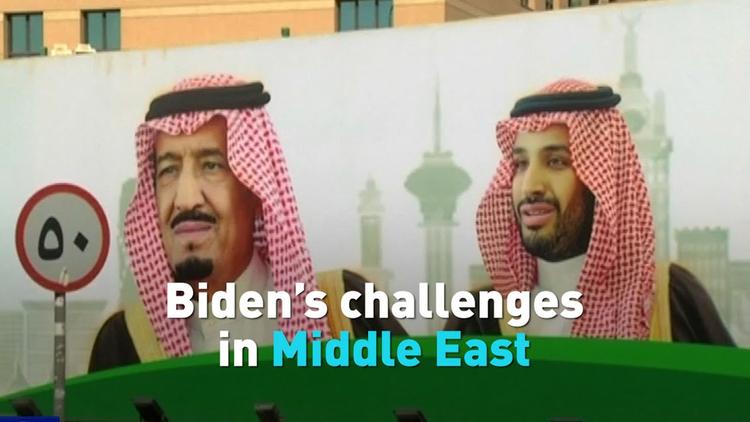 Ann Arbor (Informed Comment) – Although former president Trump claims to have avoided starting any new wars, he in fact put the US on a war footing in the greater Middle East, and significantly increased the number of US troops in the region. He tried to strangle Iran economically and assassinated one of its foremost generals by rocket. What has either accomplished? He at the same time murdered the equivalent of the head of the Iraqi National Guard, deeply endangering American and coalition troops (three of them were killed last spring).

As a result of Trump’s crazed careening from bombing to bluster, the Biden team has a lot of diplomacy before it. Turkey is a problem. Israel-Palestine is the mother of all problems, but I seriously doubt that Biden and incoming secretary of state Antony Blinken are going to take on Israel’s far right wing government in any serious way, and anyway that deserves a book, not part of a blog entry.

Today I will take up issues in Iran and the Arab world.

1. Biden needs to restore the 2015 nuclear deal with Iran, and he knows it. He may not realize how short the window for action is, however, or how dangerous it would be to make extra demands of Iran at this juncture. The Joint Comprehensive Plan of Action (JCPOA) had mothballed 80% of Iran’s civilian nuclear energy program and ensured that it could not be militarized. Iran had scrupulously complied with its obligations under the treaty until Trump trashed it in May, 2018. Iran rightly feels that it was taken for a ride, since it was promised an end to economic sanctions but never got sanctions relief. Why should it keep up its side of the bargain and still be economically blockaded?

Biden only has about six months to put things right. In June a new, hard line government will likely be elected. It is absolutely imperative that Biden avoid trying to use a restoration of the JCPOA as a lever to accomplish other US policy goals with regard to Iran. We may not like them being in Syria or Iraq, and we certainly don’t like their ballistic missile program. But if Biden ties restoration of the nuclear deal to these extraneous matters, the Iranians will get their backs up and the opportunity will be lost.

I have a different proposal. If you want Iran out of Syria or for it to stop research and development on ballistic missiles, let France revive its Renault factory in Iran, let it employ thousands of workers and bring in millions of dollars, and then tell Iran that it is difficult to justify integrating it into the world economy if it is going to be a bad actor, and its investments and trade are in danger. Rogue states are mostly able to go rogue because they have some source of wealth or power that it isn’t easy to take away from them and they don’t need anyone else or care what others think of them. Isolating and blockading Iran makes it more likely to go rogue.

2. Under Biden, the U.S. should get its remaining 2,500 troops out of Iraq. The Iraqi parliament voted for them to leave, and the US should abide by the rule of law. Moreover, the US forces will never be safe in Iraq after what Trump did to Iraqi military commander Abu Mahdi al-Muhandis, whom he blew away with Soleimani. If Iraq continues to need military training or help with mopping up ISIL, let the other nations in NATO step up. France has had a spot of trouble with ISIL and might be more acceptable to most Iraqis. Anyone could replace 2,500 troops.

It is not clear why the United States needs to have troops in Iraq. If it is to counter Iran, it doesn’t work like that. The Shiite-dominated government has good relations with Iran and a couple thousand US troops won’t change that. It isn’t to protect Iraqi petroleum. Moreover, if Biden succeeds in greening US transportation over the next decade, who cares about petroleum? The US can trade with and invest in Iraq without having troops there. It does that with lots of countries.

The only reason to try to have US troops in Iraq now is for the Blob, the national security professionals inside the Beltway, to be able to feel like they are playing masters of the universe. Enough is enough.

3. The US needs to end its involvement in the Saudi-UAE war on Yemen. They have helped turn the country into a basket case with 12 million on the brink of starving. It is shameful for the US to be involved in this genocidal activity. In fact, Washington should pressure all sides to come to the negotiating table.

4. For the love of God, get out of Syria and stay out. The US has no legitimate reason to have troops in Syria. Its presence there is illegal in international law. The doctrine under which the Obama administration went in and partnered with the Syrian Kurds to defeat ISIL was self-defense. What are we defending ourselves from in Syria in 2021?

The Washington determination not to allow Syria to rebuild, lest it strengthen the odious government of Bashar al-Assad, only hurts the Syrian person in the street. And half of them really are in the street. If the US doesn’t want to invest in Syria, that’s fine. Walk away. It is a small country of 18 million with no natural resources and no importance to the United States. Some 4 million of its people are refugees abroad, and 11 million are internally displaced. Increasing their misery in the vain hope of overthrowing al-Assad by economy sanctions is cruel. And when was the last time the US overthrew a government with sanctions?

Russia went militarily into Syria, so let it be their problem. It is not important to us, and we should spend the money on the Green New Deal domestically instead.

5. The US has substantial influence in the region and should not be afraid to use it for good. It should stop short of military entanglements, is all. Biden should put severe pressure on the government of Abdelfattah al-Sisi in Egypt to stop imprisoning people for thinking and doing journalism and staging small protests.

Likewise, pressure should be applied to Saudi Arabia to let its own prisoners of conscience go. That such pressure would be effective is clear from the way the Saudi government more or less let the young woman driving enthusiast Loujjain al-Hathloul go once it was clear Biden had won.

Simple resolve and implied economic threats can accomplish a lot. The Trump administration gave free rein to the worst actors in the Middle East for four years, abdicating leadership and allowing or running interference for bad behavior.

When in 2014 the Saudis and the United Arab Emirates broached to Obama a plan to attack and blockade their neighbor and supposed security partner, Qatar, the Obama administration just told them “no.”

And they didn’t. The United States provides the security umbrella for Saudi Arabia and its trillions. The Saudi royal family typically bends over backward to please the U.S.

When in 2017 the Saudis and the UAE came to Trump and broached an attack on and blockade of Qatar, Trump jumped in with both feet and started tweeting nonsense about Qatar backing terrorism. It doesn’t. So the blockade happened, ruining US Gulf policy for the rest of Trump’s term in office. Former secretary of state Mike Pompeo wanted to unite the Sunni Arab gulf monarchies against Iran, but Qatar, under blockade, needed Iran’s help.

All Trump had to do was tell the Saudis “no” and the whole crisis could have been avoided.

Biden should start saying “no.”

NB: This report is via a Chinese news channel, but I can’t identify anything in it that is particularly tilted toward Beijing policy preferences. I think Stenman does a good job here of laying out some of the issues. My rule is, you go by the quality of the report, not the channel that carries it.