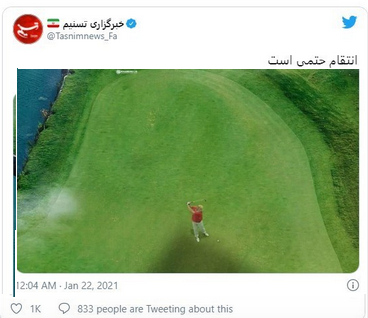 A small twitter account run by unknown persons with only 8,000 followers posted the image of someone (it wasn’t a picture of Trump per se) on a golf course being droned, and that tiny account was banned.

Raphael Gluck of Jihadoscope, which tracks extremism on the Web, observed:

The deleted Khamenei Twitter account sharing an image of Trump playing golf & targeted by a drone, seems to be nothing more than a regime fanboy account with a small following. It's not listed on the main #Khamenei account set pic.twitter.com/bJ82FswYh1

Khamenei’s actual account in English has 886,000 followers and it is very active. Of course, Twitter is banned in Iran itself and Khamenei wouldn’t recognize a computer if it fell on his turban. The site is run by some young staffers for the Islamic Republic. The official account hasn’t carried any threats.

It wasn’t just Reuters. Many news outlets carried the story with a similar headline. Even Iran’s Tasnim News carried a similar story, referencing the Western news outlets and failing to correct the allegation that the image was carried on Khamenei’s official Twitter feed.

Reuters asked somebody in Khamenei’s circle about the tweet, and was told it was intended to remind Trump that he cannot escape justice.

I would have said the same thing. That’s obviously the purpose of the Tweet. It just wasn’t on Khamenei’s Twitter account, it was on a spoof account. Of course hard liners in Tehran talking about Trump’s assassination of Gen. Qasem Soleimani on January 3, 2020, are not going to disavow anything. That would be against everything hardlinerism stands for. That is why Tasnim essentially parroted the Reuters article.

Now, has Khamenei said that Trump will face justice? Yes. In speeches and on his official account. But a headline and article that implies that Khamenei issued the threat on Twitter, posted an image of a golfer, and had his official account canceled is not just irresponsible, it is false.

There seems to be a different standard for reporting on Iran, in which people say the most incredible and clearly untrue things, and aren’t challenged on it. Of course the hard line Iranian press is also full of falsehoods, but they do not have fact checkers, only regime censors.

In December, Iranian President Hassan Rouhani said in a speech,

“Trump was like Saddam, Saddam imposed eight years of war on us and he was overthrown, and Trump imposed three years of economic war on us, and in the coming weeks he will be thrown out of the government. Because of the crimes and oppression he committed, he will be disgraced in history.”

BBC Monitoring says that Rouhani used the phrase “he will be thrown out of the government and out of life,” but that the transcript omitted this phrase. Even if that is true, it isn’t a threat to assassinate Trump by the president. It is in the passive mood. Iran did not throw him out of government, and as phrased, it isn’t implied that it will throw him out of life, either. Read the whole passage. Rouhani began by saying that Trump is like Saddam. Saddam lost his presidency and then lost his life. Rouhani is saying he hopes Trump meets a similar fate, not that he himself is ordering a hit.

The Washington Times accused Rouhani of making a death threat in the speech. Spokesman for the Iranian foreign ministry Saeed Khatibzadeh replied on Twitter that it was a false charge and that blowing away foreign leaders was a “US-Israeli trademark, not Iranian”.

Khamenei did threaten vengeance for Trump’s murder of Gen. Soleimani, on Twitter, last year after the US strike on Baghdad International Airport.

He did not say he intended to take revenge. Both Khamenei and Rouhani are clerics, and they speak theologically. They are sure that God will wreak vengeance on tyrants and criminals. No one in Iran has given a tactical order to take Trump out, and it is highly unlikely that a small weak country like Iran would dare physically attack a former US president.

The Islamic Republic has committed massacres and has ordered covert operations (we in the US would view them as terrorist attacks). It isn’t a nice regime. But let’s report what its leaders actually say and what actually happens to them, not make up fantasies about their official Twitter accounts being banned and let’s not attribute small spoof accounts to them.

Featured image: The offending Tweet, cropped so as to avoid spreading around inflammatory lanaguage.