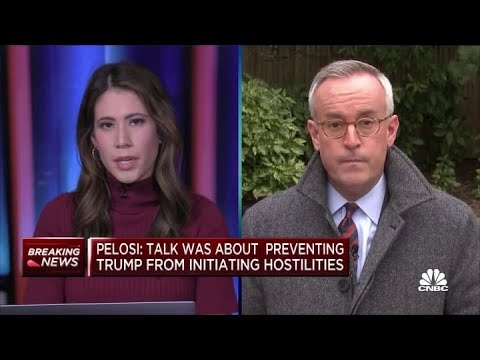 Southwest Harbor, Maine (Special to Informed Comment) – Should American citizens feel relieved that Speaker Pelosi has met with General Milley to discuss the nuclear command structure? I am not. From the start of the nuclear age we have been asked to believe that as long as these weapons of mass destruction were under the supervision of the adults in the room we need not be overly alarmed. Even much of the focus of presidential campaigns has been on the qualifications and maturity of the man or woman who would hold the nuclear trigger.

Constructive as Pelosi’s conversation may have been, reports on it beg one important question. Barring impeachment and conviction, Trump remains commander in chief with presumably full control of that lethal trigger. And since the system is predicated on the need for rapid response it seems unlikely that there could be too many barriers to impetuous actions by Trump. And if there are such barriers would these not amount to an unconstitutional attack on the powers of the presidency, a counter coup? MIT professor and expert on nuclear proliferation issues Vipin Narang discussed this issue in a recent Washington Post interview: “. Is there anything Milley can do to prevent the president from “accessing the launch codes and ordering a nuclear strike”?

“The answer is emphatically no. The president, and the president alone, possesses the sole authority to order a nuclear launch, and no one can legally stop him or her. Despite reports that Pelosi received assurances that there are safeguards in place in the event the president of the United States (POTUS) wants to launch a nuclear weapon, any such meaningful or effective safeguards would be illegal.”

The threat of reckless nuclear strikes by a leader who has often threatened use of such weapons is a further reason to impeach and convict or otherwise remove from office as soon as possible.

Important as is this legal drama it should not distract us from the growing dangers posed by the evolution of these technologies. Modernization of nuclear weapons means their further digitalization. The Biden Harris administration is likely to follow the Obama-Biden request for a 300 billion dollar commitment to nuclear modernization. I find it curious that in a month when the US has been victim of a major cyberattack of yet unknown dimensions and duration political leaders and pundits would worry almost exclusively about the nuclear damage Trump might do. To the damage that would result from prosaic events as mishandling the hardware we now must add such possibilities as these, cited by Nuclear Threat Institute (NTI) scholars:

NTI adds: “Cyberattacks are becoming increasingly sophisticated and levels of digitization are growing (for example, as will undoubtedly occur during the upcoming modernization of the U.S. nuclear arsenal). Taken together, this is a dangerous mix and governments and industry must act to address the threat.”

Cyber protocols and procedures might be negotiated to limit such risks, but the hackers and other malevolent interests always seem to be a step ahead. When it comes to nuclear weaponry cybersecurity may be an illusion. Unlike many of life’s responsibilities, being successful most of the time is not good enough.

Taking nuclear weaponry off high alert status may improve our odds in the short run. Nonetheless, curbing our growing dependence on digital technologies and complete nuclear disarmament, however seemingly unrealistic, are better bets for our long run survival.