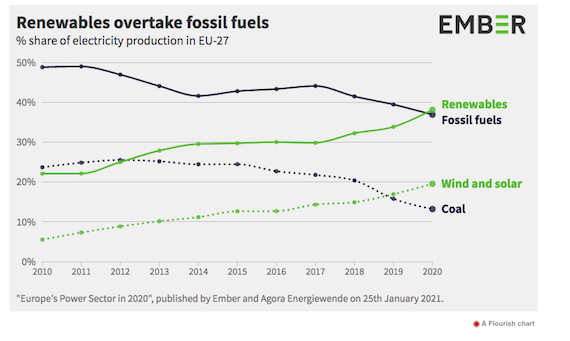 Ann Arbor (Informed Comment) – A new report from Ember and Agora Energiewende finds that in 2020, the 27 countries of the European Union generated more electricity with renewables (wind, solar, hydro) than with fossil fuels (coal and natural gas). The growth in renewables has all come from wind and solar. These two increased by 51 terawatt-hours in 2020, substantially higher than the yearly average growth during the past decade.

Ember writes, “Renewables rose to generate 38% of Europe’s electricity in 2020 (compared to 34.6% in 2019), for the first time overtaking fossil-fired generation, which fell to 37%.” The full report is here.

One of the takeaways here is that we can do this. If highly industrialized, carbon-intensive socieities like those in Europe can already in 2020 get a majority of their electricity from renewables, the world can clearly get to carbon neutrality, if we want to, before we generate too much carbon in the atmosphere for the oceans to absorb. Then as the parts per million of carbon dioxide slowly decline, we will avoid the worst of global heating.

The good news is that the price of electricity generated by renewables is going through the floor. Portugal announced this summer that it had received a solar bid of only 1.2 US cents a kilowatt hour, a record low for the continent. Coal is typically estimated to cost 5 cents a kilowatt hour, so you’d have to be brain dead to use it to generate electricity any more. The only reason countries like Poland do it is that they have substantial sunk costs in this old, smelly, destructive sector, and politicians are afraid of coal companies and coal workers so they subsidize it. Poland isn’t as sunny as Portugal, but if you could get anywhere near the Enerland Group bid you could close a coal plant and build and run a new solar installation and still make money.

Renewables, including 7% hydro, only account for about 20% of US electricity,

Despite the economic slowdown of the pandemic, Europe’s wind generation increased 9% in 2020 and solar generation went up 15%. These two sources accounted for 20% of Europe’s electricity last year, with hydro the other major renewable. Biomass has stalled out.

Some really great news is that coal generation in Europe is half what it was in 2015. Indeed, it fell 20% in 2020 alone. Coal is by far the dirtiest burning hydrocarbon and is still responsible for 23% of US electricity generation.

Although half of the reduction in coal was owing to wind and solar replacing it, the other half of the former coal generation was replaced by natural gas. Although natgas is about half as carbon intensive as coal, it is still a major source of planet-wrecking carbon dioxide. The goal must be to replace all retiring coal with wind and solar. Since both are rapidly dropping in price and they are responsible for most new electricity plants, that replacement is a real possibility going forward.

Nuclear plants are also being rapidly decommissioned, and the electricity they generated must also be replaced by wind and solar (not by natural gas) if Europe is to meet its Paris Climate goals.

Embed from Getty Images
The sun sets beyond wind turbines and electricity power lines near Fjerritslev, Denmark, on Sunday, April 17, 2016. “The doubling of turbine size this decade will allow wind farms in 2020 to use half the number of turbines compared to 2010,” said Tom Harries, an industry analyst at Bloomberg New Energy Finance. Photographer: Chris Ratcliffe/Bloomberg via Getty Images.

Even with all the good news in the 2020 report, Europe is still not on track to meet those objectives and has to up its renewables game significantly. This report estimates that Europe needs to triple the rate of wind-and-solar growth annually to achieve its 2030 targets. The European Parliament this summer upped its goal for reduction of carbon dioxide emissions, hoping to generate in 2030 only 50% to 55% of what it did in 1990. However, to keep global heating to 2.7 degrees F. (1.5 degrees C.), which scientists think is an optimal way to avoid climate catastrophes, Brussels would have to increase that goal to a 65% reduction.

The report argues that the possibilities are driven not by solar and wind resources, which are found in abundance around the continent, but by government policy. The typical U.S. corporate shaming of individuals is not entertained in Europe. It is governments that have the power to ensure infrastructural change.

Denmark decided some time ago to get to carbon neutrality as quickly as possible, and now it gets 62% of its electricity from wind and solar. It is the leader in Europe in this regard.

Ireland comes next. Germany’s commitment to the “energy transformation” (Energiewende) is long term and well known, and despite being the industrial engine of Europe it comes in third for wind and solar on the continent. Spain, under its socialist government, has put in a lot of wind and solar and they now account for nearly 28 percent of its electricity, well above the European average of 20%.

The report complains that there are some EU laggards, with Romania, Austria, Italy, Czechia, Slovakia and Bulgaria basically having sat on their hands since 2015. Can you imagine the solar potential of Italy? But because the government hasn’t properly promoted it, Italy’s solar generation is mainly from rooftop installations.

One of the impetuses to progress on renewables in Europe has been that 17 of the 27 countries have a carbon tax, which is what the US also needs. Some complain that carbon taxes are regressive, but that just means they have to be designed carefully or that the poor and the workers need to be made whole in any legislation.

The German Green Party has proposed that both the United States and the European Union impose an import carbon tax, penalizing goods produced with a high carbon footprint, as part of Washington’s post-Trump engagement with Europe. President Biden should listen to them.

Council of the EU: “1
EU to invest now in clean energy technologies”