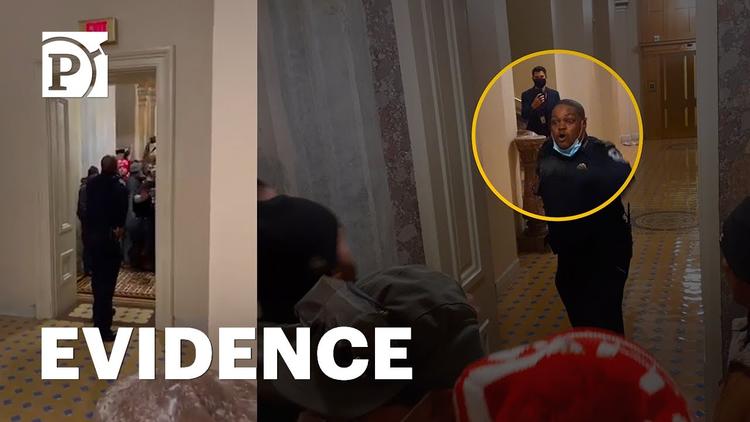 By Joshua Kaplan and Joaquin Sapien

Allegations of racism against the Capitol Police are nothing new: Over 250 Black cops have sued the department since 2001. Some of those former officers now say it’s no surprise white nationalists were able to storm the building.

( ProPublica) – When Kim Dine took over as the new chief of the U.S. Capitol Police in 2012, he knew he had a serious problem.

Since 2001, hundreds of Black officers had sued the department for racial discrimination. They alleged that white officers called Black colleagues slurs like the N-word and that one officer found a hangman’s noose on his locker. White officers were called “huk lovers” or “FOGs” — short for “friends of gangsters” — if they were friendly with their Black colleagues. Black officers faced “unprovoked traffic stops” from fellow Capitol Police officers. One Black officer claimed he heard a colleague say, “Obama monkey, go back to Africa.”

In case after case, agency lawyers denied wrongdoing. But in an interview, Dine said it was clear he had to address the department’s charged racial climate. He said he promoted a Black officer to assistant chief, a first for the agency, and tried to increase diversity by changing the force’s hiring practices. He also said he hired a Black woman to lead a diversity office and created a new disciplinary body within the department, promoting a Black woman to lead it.

“There is a problem with racism in this country, in pretty much every establishment that exists,” said Dine, who left the agency in 2016. “You can always do more in retrospect.”

Whether the Capitol Police managed to root out racist officers will be one of many issues raised as Congress investigates the agency’s failure to prevent a mob of Trump supporters from attacking the Capitol while lawmakers inside voted to formalize the electoral victory of President-elect Joe Biden.

Already, officials have suspended several police officers for possible complicity with insurrectionists, one of whom was pictured waving a Confederate battle flag as he occupied the building. One cop was captured on tape seeming to take selfies with protesters, while another allegedly wore a red “Make America Great Again” hat as he directed protesters around the Capitol building. While many officers were filmed fighting off rioters, at least 12 others are under investigation for possibly assisting them.

Two current Black Capitol Police officers told BuzzFeed News that they were angered by leadership failures that they said put them at risk as racist members of the mob stormed the building. The Capitol Police force is only 29% Black in a city that’s 46% Black. By contrast, as of 2018, 52% of Washington Metropolitan police officers were Black. The Capitol Police are comparable to the Metropolitan force in spending, employing more than 2,300 people and boasting an annual budget of about a half-billion dollars.

The Capitol Police did not immediately respond to questions for this story.

Sharon Blackmon-Malloy, a former Capitol Police officer who was the lead plaintiff in the 2001 discrimination lawsuit filed against the department, said she was not surprised that pro-Trump rioters burst into the Capitol last week.

In her 25 years with the Capitol Police, Blackmon-Malloy spent decades trying to raise the alarm about what she saw as endemic racism within the force, even organizing demonstrations where Black officers would return to the Capitol off-duty, protesting outside the building they usually protect.

The 2001 case, which started with more than 250 plaintiffs, remains pending. As recently as 2016, a Black female officer filed a racial discrimination complaint against the department.

“Nothing ever really was resolved. Congress turned a blind eye to racism on the Hill,” Blackmon-Malloy, who retired as a lieutenant in 2007, told ProPublica. She is now vice president of the U.S. Capitol Black Police Association, which held 16 demonstrations protesting alleged discrimination between 2013 and 2018. “We got Jan. 6 because no one took us seriously.”

Retired Lt. Frank Adams sued the department in 2001 and again in 2012 for racial discrimination. A Black, 20-year veteran of the force, Adams supervised mostly white officers in the patrol division. He told ProPublica he endured or witnessed racism and sexism constantly. He said that before he joined the division, there was a policy he referred to as “meet and greet,” where officers were directed to stop any Black person on the Hill. He also said that in another unit, he once found a cartoon on his desk of a Black man ascending to heaven only to be greeted by a Ku Klux Klan wizard. When he complained to his superior officers, he said he was denied promotions and training opportunities, and suffered other forms of retaliation.

In an interview, he drew a direct line between racism in the Capitol Police and the events that unfolded last week. He blamed Congress for not listening to Black members of the force years ago.

“They only become involved in oversight when it’s in the news cycle,” said Adams, who retired in 2011. “They ignored the racism happening in the department. They ignored the hate.”

The department’s record in other areas of policing have drawn criticism as well.

In 2015, a man landed a gyrocopter on the Capitol lawn — top officials didn’t know the airborne activist was coming until minutes before he touched down. In 2013, when a lone gunman opened fire at the nearby Navy Yard, killing 12 people, the Capitol Police were criticized for standing on the sidelines. The force’s leadership board later determined its actions were justified.

Last month, days after a bloody clash on Dec. 12 between militant Trump supporters and counterprotesters, Melissa Byrne and Chibundu Nnake were entering the Capitol when they saw a strangely dressed man just outside the building, carrying a spear.

He was a figure they would come to recognize — Jacob Chansley, the QAnon follower in a Viking outfit who was photographed last week shouting from the dais of the Senate chamber.

They alerted the Capitol Police at the time, as the spear seemed to violate the complex’s weapons ban, but officers dismissed their concern, they said.

One officer told them that Chansley had been stopped earlier in the day, but that police “higher ups” had decided not to do anything about him.

We don’t “perceive it as a weapon,” Nnake recalled the officer saying of the spear.

Chansley told the Globe and Mail’s Adrian Morrow that Capitol Police had allowed him in the building on Jan. 6, which would normally include passing through a metal detector, although he was later charged with entering a restricted building without lawful authority, violent entry and disorderly conduct on Capitol grounds. As of Tuesday, he had not yet entered a plea.

For Byrne and Nnake, their interactions with the “QAnon Shaman” on Dec. 14 highlighted what they perceive as double standards in how the Capitol Police interact with the public.

Like many people who regularly encounter the force, Nnake and Byrne said they were accustomed to Capitol officers enforcing rules aggressively — later that day, Nnake was told that he would be tackled if he tried to advance beyond a certain point. “As a Black man, when I worked on the Hill, if I forgot a badge, I couldn’t get access anywhere,” he told ProPublica.

Congress, which controls the agency and its budget, has a mixed record of oversight. For the most part, Congress has been deferential toward the force, paying attention to its workings only after serious security failures, and even then, failing to meaningfully hold its leaders accountable.

Rep. Eleanor Holmes Norton, a Democrat from D.C. who is a nonvoting member of Congress, told ProPublica she believes a national commission should be formed to investigate what occurred at the Capitol on Jan. 6, similar to what followed 9/11.

“Congress deserves some of the blame,” she told ProPublica. “We have complete control over the Capitol Police. … Long-term concerns with security have been raised, and they’ve not been dealt with in the past.”

The force has also suffered a spate of recent, internal scandals that may prove pertinent as Congress conducts its investigation.

Capitol Police officers accidently left several guns in bathrooms throughout the building in 2015 and 2019; in one instance, the loaded firearm was discovered by a small child.

The agency has been criticized for a lack of transparency for years. Capitol Police communications and documents are not subject to the Freedom of Information Act and, unlike many local law enforcement agencies, it has no external watchdog specifically assigned to investigate and respond to community complaints. The force has not formally addressed the public since the riot last week.

“All law enforcement is opaque,” said Jonathan M. Smith, executive director of the Washington Lawyers’ Committee for Civil Rights and Urban Affairs. “At least most local police departments are subject to some kind of civilian oversight, but federal police agencies are left to operate in the shadows.”

The agency’s past troubles have rarely resulted in reform, critics said.

After the April 2015 gyrocopter incident, Congress held a hearing to examine how 61-year-old postal worker and activist Doug Hughes managed to land his aircraft after he livestreamed his flight. Dozens of reporters and news cameras assembled in front of the Capitol to watch the stunt, which was designed to draw attention to the influence of money in politics. Capitol Police did not learn of the incoming flight until a reporter reached out to them for comment, minutes before Hughes landed.

Dine defended the force’s response to the incident, pointing out that Hughes was promptly arrested and no one was hurt.

Former Rep. Jason Chaffetz, a Republican from Utah, then the chairman of the Committee on Oversight and Government Reform, harshly criticized the department and other federal agencies for what he perceived as an intelligence failure.

“The Capitol Police is terrible and pathetic when it comes to threat assessment,” Chaffetz told ProPublica in an interview. “They have a couple people dedicated to it, but they’re overwhelmed. Which drives me nuts. … It’s not been a priority for leadership, on both sides of the aisle.” He said he is not aware of any serious changes to the force’s intelligence gathering following the debacle.

Norton, who also pressed Dine at the hearing, told ProPublica the intelligence lapses surrounding the gyrocopter landing should be considered a “forerunner” to last week’s riot.

“For weeks, these people had been talking about coming to the Capitol to do as much harm as they can,” Norton said. “Everyone knew it. Except the Capitol Police.” Reports show the force had no contingency plan to deal with an escalation of violence and mayhem at last week’s rally, even though the FBI and the New York Police Department had warned them it could happen.

Law enforcement experts said that the agency is in a difficult position. While it has sole responsibility for protecting the Capitol, it must work with other nearby federal law enforcement agencies, Washington’s Metropolitan Police and the National Guard in case of emergencies.

In an interview, Nick Zotos, a former D.C. National Guard commander who now works for the Department of Homeland Security, said that the roughly two dozen agencies responsible for public safety in Washington can cause territorial disputes, finger-pointing and poor communication.

“This is not a D.C. thing, necessarily, although it’s probably the worst in D.C.,” Zotos said. “Police departments just don’t play with each other nicely.”

Blackmon-Malloy told ProPublica that divisions within the Capitol Police could be just as dangerous, not only for Congress but for Black officers themselves. “Now you got to go to work on the 20th,” she told ProPublica, alluding to the inauguration. “And stand next to someone who you don’t even know if they have your back.”